An Interview with Rachel Lyon

The debut novelist talks art, life-altering decisions, and the reality of scrapping the first draft. 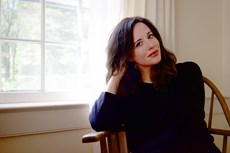 As any author would tell you, writing a book is difficult business. For Rachel Lyon, her debut novel, Self-Portrait with Boy, was approximately five years in the making. Lyon has had several short stories published, but tackling a full-fledged novel about a young artist who finds herself having to make a difficult choice proved to be a very different process altogether.

How is writing a novel different from writing short stories?

It’s very different. I tend to write short stories fairly quickly, within a few days. Usually if I’m spending more time (on a short story) than a few days, then it’s not really working. But this novel took a long time, and it was a very different process. I started in drafts, not really sure who the narrator was going to be, if it would be multiple narrators, what the main thrust of the plot was going to be. There was a lot of experimenting that went into it in the early stages. It took years to come up with my first draft, and then after that first one, I ended up scrapping the whole manuscript and starting again. It was a fun process and there was a lot of joy in the method of it. Sitting down every morning and just knowing what the next scene would be. I felt then that I could basically see the light at the end of the tunnel — although it was pretty faint sometimes.

What authors inspire you?

That question is a bit difficult to answer because I’m a very broad reader. I like poetry, essays, nonfiction, and everything really. I tend to be sort of a “project-based reader,” in the sense that, for example, when I was working on [this novel], I read a few books that had been written in the 90s, like I Love Dick by Chris Kraus. I looked at books that were popular around the time that my novel was set to give it historical context, and I read some New York history, which was really fun.

How long has this novel been in the works?

I started it in earnest around 2014, I think. I went to a writing residency after graduate school and it was then when I first started researching the East River and the ghost stories that surrounded it, as well as the history of DUMBO (short for Down Under the Manhattan Bridge Overpass). So perhaps it was closer to 2012 when I started.

Lu, the main character in Self-Portrait with Boy, is faced with a very tough choice: friendship vs. her career. Do you think the choice she ultimately makes affects how she sees herself as a person?

Obviously, it’s quite destructive. One of the characters in the book says to her, “She had to do what she did to begin to become herself.” I don’t think about that so fatalistically and I don’t think anyone actually has to do anything (good or bad) to be who they need to be. There are infinite ways of growing and changing. But what she does has its effect on her, and I think she becomes more sensitive to other people and more aware of her power over other people and of her own agency as a consequence. And she learns that she has the capacity to love people in a way that she didn’t know how in the beginning of the novel.

You portray a sort of artist commune in a rundown, derelict building in Brooklyn. How did those characters come about?

I was thinking about the artists that I grew up around as a child, thinking about artist friends of mine. It was fun to think of art as an expression of character, but a lot of the characters in the book came from the art that I imagined them making. The building itself is a facilitator, a setting, a problem. It’s an obstacle in the plot but it’s also a vehicle.

Which character presented the greatest challenge?

Lu, definitely, because she’s very different from me. Many of the other characters I felt like I could picture them in my mind, or that I could sympathize with them, or both. I had a visual of Lu, but I didn’t quite understand her motivations and personality for years during the writing process. My first manuscript was in the third person and it wasn’t until I started writing in the first person from her point of view that she finally clicked for me.

I’m working on a novel about a young woman just out of college who goes to work for an older, more successful male writer, the power dynamics of the relationship, and how that evolves in the course of the book. She becomes his nanny, and he’s a bit of an alcoholic. [Laughs.] But it’s fun because it’s told in the third person and it takes place in the present. I think about it a little bit as my #MeToo novel.

The first of a two-part Q&A with the author of From Slave Ship to Harvard. The second part will appear Tuesday!