Susan Minot talks about spending seven years to tell a disturbing story, why writers should pursue a 'disturbing feeling' in their work, and why there's no significant difference between writing a novel or short story. 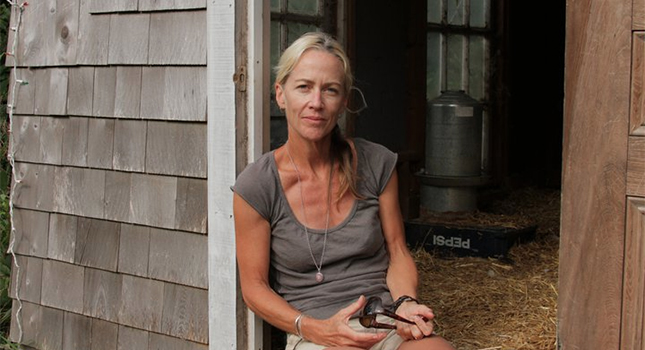 Susan Minot closes her eyes and sees more than most people. As a novelist, poet and writer of short stories and screenplays, her prose is rich and economical. She’s been called a minimalist, but she often stretches beyond that categorization.

Her new novel, Thirty Girls, is an emotionally-charged, haunting work based on a true story of abduction and torture in war-torn Uganda. In October 1996, 139 girls at St. Mary’s College in Aboke were abducted by guerrillas from the rebel Lord’s Resistance Army. The school’s headmistress followed the rebels and ultimately convinced them to return all but thirty. Heart-wrenching without being manipulative, Thirty Girls’ is Minot’s attempt to tell a story she believes needs to be told.

Her previous novel, Evening, is already recognized as a classic by authors ranging from Joan Didion (“her best…assured, supple, exhilarating) to Tom McGuane (“vindicates the wildest assertions any of us have made about [her] talent”). Minot’s widely published short fiction has earned the O. Henry Prize and a Pushcart Prize.

Minot’s non-fiction has appeared in The New York Times, Conde Nast Traveller, House and Garden, and Vogue. The story “This We Came to Know Afterward,” about the kidnapped children in Uganda, was published by McSweeney’s #5 in 2000 andselected for The Best American Travel Writing 2001.

She’ll be reading from her new book on March 8 at Politics & Prose. We spoke over the phone February 13 and swapped a few emails afterward.

Thirty Girls is a serious book about a serious subject. Did you ever find yourself weighed down emotionally during the research or writing?

Definitely (laughs). It could be certainly tiring sometimes. Thinking about these situations, about these girls going through such terrible things was draining. Obviously one of the reasons I immersed myself in it was to try to convey what it was like for them and in this particular case to do it for people not really in a position to express it themselves.

How did you cope with it?

A couple of ways, I guess. The book took seven years to write, so I was pretty much in theory working only on the book. But at times I would pause to write a short story. I also started notes toward a few other book ideas, so I would take a break from the material here and there. But can’t do that too much. If you do that you will never finish the book! Also, the narrative in the book alternates between two stories—of Esther, the Ugandan girl and of Jane, the American writer. When I was focusing on Jane and her world and what she was struggling with, that was certainly a little less harrowing to think about. So within the book I had a way to take a break from some of the more stressful concerns. It did make me realize that if the book contained only Esther, her story it might be too relentless for the reader.

That’s what we’re here for (laughs).

Thanks. It’s from Thirty Girls. “The vastness of the savannah below reminded her how tiny a speck she was too and yet at the same time offered her the illusion that she could reach across and touch the bluff miles away.” To me that sounded like the cosmic idea that we’re our little speck, yet we’re made of stars and thus part of a huge, maybe infinite, cosmos. Am I over reading the sentence?

In your excellent novel Evening, you acknowledge a dozen or so locations where you wrote the book. How important is location for you when you write?

Location is certainly important in terms of the way people behave in different locations.  Behavior in one location can look very different when it is transposed to another location. As far as writing goes though, the process of writing truly takes place in your head. In that sense it doesn’t matter where you are. The place where you are affects you until just before you start writing and as soon as you stop, but the writing itself takes place in no location.

So if you’d tried different passages in different locations, you don’t think that would have changed the writing, as it were?

I don’t. One’s life, however, would be different.

Let’s talk a little about process. How do you approach writing?

As an obsessive compulsive (laughs).

Do you approach short stories differently than novels?

Not really. The process of putting words down on the page whether there will be 300 pages or ten, is the same process for me. It’s one draft then another, throwing things out, starting in a different direction…it’s a bigger project and more chaotic when it is longer, but the process is the same.

Do you always know when you start which it will be?

Not always. In fact, a couple of books ago, a novella called Rapture, I thought would be a three page short story. A very short short story. It was an interior monologue with a little twist at the end. But then I found there were more stories in it and kept writing.  There were more places for it to go.

I think the blurb is describing a subject, no? A theme would be more along the lines of longing or trying to understand other people. I certainly don’t choose a subject abstractly like that. When I’m writing a story I think I usually begin with an image or a visual situation.

Something I can picture. Two people sitting at a table. A moment of someone being shocked. Something that disturbs me in a way. It is usually something rattling, but the disturbance can also be in an endearing way. I guess I follow that disturbed feeling and sort of make inquiries about it and convey its mystery.

It’s only after the story is underway that I can say “Oh, I’m interested in exploring grief here.” Or, it seems as if I’m intrigued by people who seem to appear one way but are actually another. It’s really after the fact that one can trace themes and isn’t the writer sort of the last one who should have to talk about that—that is, break down the story she’s written in other terms. She wrote the story that way, presumably, because it conveyed what she had to say in the best way she could manage. As far as subject goes, I’ve written enough things by now to know I’m more interested in what goes on with my characters at a psychic level than I may be with how they feel about themselves in terms of their social standing. That would not be my first interest. Of course, for another author that might be compelling and wonderful to read about.

How autobiographical is your work? Are there times where a friend or loved one will say “hey, is that me?” I’m thinking especially of the short stories about couples.

Well everyone either sees or doesn’t t see themselves if they have been invoked (laughs). The material you have to write with, unless you’re taking your inspiration from other things you’ve read, it’s your experience of the world.  That is going to be your palette, right? I think some writers hide it better than others. In nearly all the writers I know, I can see little indications of things I recognize in their lives. Jamaica Kincaid was once asked how autobiographical a story was. It was narrated by a man, and she said, “Every word is absolutely true.” I loved that.

I have a collection of short stories that all take place on an island on the coast of Maine. It will take me a year or two to write them, a couple are already written. And I am always writing poetry to some degree or other, but I don’t consider that work I am working on. Probably because very little of it is published. I guess that turns it into work.

Michael
Causey is a past president of Washington Independent Writers.