An Interview with Oded Galor

In his new book, the economist explores mankind’s penchant for fomenting inequality. 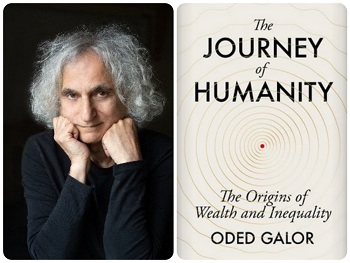 Dr. Oded Galor is an economist, author, and the Herbert H. Goldberger Professor of Economics at Brown University. He is the founder of unified growth theory and has written extensively about the impact of human evolution, population diversity, and inequality on the process of development over most of human existence. His new book, The Journey of Humanity: The Origins of Wealth and Inequality, continues the study and further explores mankind’s journey through time.

Ecological disasters, weather disasters, land-overuse disasters, decimated forests, pandemics, and more resulted in the annihilation of early civilizations. These are all ongoing and mostly caused by man. So, what saves us from ourselves in the 21st century?

Indeed. Alongside the breathtaking technological progress and the vast improvement in living standards, the human species has experienced major catastrophes in the course of its history. In the first half of the 20th century, tens of millions of people died in the trenches of World War I and in the Spanish flu pandemic that convulsed the world in 1918-20. The Great Depression, which began in 1929, pushed many countries into not only poverty and unemployment but also devastating political extremism, and the first shot of atrocity-ridden World War II was fired 10 years later. And yet, ultimately, even these dreadful events have not diverted humanity from its new phase of sustained economic growth and the grand arc of the advancement of humanity. Living standards as a whole, seen through a broader time lens, have swiftly recovered from each of these catastrophes.

The recent trends in ecological, climatic, and epidemiological disasters are alarming and appear as if they could potentially derail humanity from its relentless march. Yet the technological acceleration that has greatly contributed to these distressing trends has also brought about the power of innovations along with the decline in fertility and population growth — forces that hold the key for humanity to maintain its course. The decline in fertility rates below replacement levels in much of the world will mitigate the pressure on the environment, while the power of innovations will permit humanity to develop revolutionary technologies that will be needed to confront future pandemics (as we have done so successfully in the context of mRNA technologies to counter covid-19) and to mitigate and ultimately reverse the current course of climate change.

You write, “Thus emerged Homo Technologicus: human beings whose fingers adapted to sculpt raw materials into useful hunting and cooking objects, whose arms developed to hurl spears, and…whose brains evolved to store, analyze and transmit information, to reason and communicate using languages.” Is there no other species that has adapted and changed to insure its survival? Without placing a value on evolution, isn’t the hurling arm a precursor to the fighting arm, to the desire to fight? Is it possible for humans to evolve into peace-loving creatures?

The struggle over limited resources has been prevalent across all species since life was formed on planet Earth. And, naturally, the human species could not and has not been an exception. In fact, the exploding eightfold increase in the world population in the past 200 years has intensified the struggle for existence despite rapid technological change and has not contributed to a decline in the belligerent tendencies among the human species.

Nevertheless, two critical recent trends are heralding a promising direction. The decline in fertility rate and population growth, and the acceleration in technological innovations, particularly in boosting crop yield, suggests that the struggle over limited resources will be mitigated over time, and it is therefore likely that the human species will become increasingly less belligerent in the decades to come.

You argue that the plough is the great influencer of the cultural acceptance of women in the workplace. You explain that when ploughs became a part of farming technology, women became less a part of the farming workforce and less likely to be accepted there. Yet so much of the developing world by necessity has women working the farm. Why do so many in the developing world continue to resist women in the workplace?

Cultural traits tend to be very persistent. In fact, cultural norms often persist despite major changes in the socioeconomic environment. Historically, using a plough and controlling the animals that pull it required massive upper-body strength. Hence, since men have had a significant physiological advantage over women in ploughing, in regions where the soil was receptive for use of the plough, women had been limited to housework. The introduction of the plough in the course of human history therefore induced a division of labor along gender lines, enhancing gender bias in society. In some of these societies, women have indeed gradually resumed their work in the agricultural sector, but nevertheless, the original cultural predisposition persists, and the resistance towards labor force participation of women is still prevalent. That’s the nature of cultural traits. They persist.

The suitability of land for large plantations fostered the emergence and persistence of extractive institutions characterized by exploitation, slavery, and inequity. Are we honestly blaming the land for human constructions, chiefly greed? Was there anything else at play?

The book does not explore what has contributed to the emergence of greed in the human species. Instead, in view of the prevailing predisposition towards greed, it explores the geographical origins of extractive institutions. Namely, the contribution of geographical characteristics to the emergence of sociopolitical forces that permitted these horrific extractive institutions to emerge.

One mechanism among many that are explored in the book is the contribution of land suitability for large planation to the emergence of extractive institutions. As is well documented empirically, geographical and crop characteristics that were conducive for large plantations contributed to the emergence of powerful large landowners. The political power that they have augmented over time enabled them to influence the political institutions that emerged in their region. In particular, this landed aristocracy was pivotal in the adoption of extractive institutions that sustained inequality, and ultimately in the introduction of the horrific institution of slavery that served their financial interest.

Thus, soil characteristics conducive for large plantations gave rise to the emergence of extractive institutions, as well as a reinforcing cultural trait of racism that provided the distorted moral justification for exploitation and slavery.

Vailes Shepperd is a fiction writer and author of A Good Ending for Bad Memories.