An Interview with Matthew Olshan

Best known for writing YA novels, the author here discusses his acclaimed work of literary fiction. 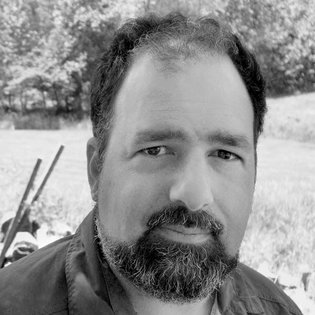 “Early on, he kept a journal…” So begins Marshlands, the story of Gus, an aging prisoner suddenly released into a bustling city. Here, author Matthew Olshan — whose other works include the young-adult titles Finn and The Mighty Lalouche — talks about his latest book, the power of words, and the elusiveness of redemption.

Gus has difficulty adjusting to his new freedom. He doesn’t even try to find family, friends, or anyone else he once knew. Is he ashamed of his freedom — or of his incarceration?

At the beginning of the novel, Gus is a ghost of his former self haunting the city of his youth. The decades in military prison have stripped him not only of his flesh, but also his sense of self. His shame is indeed overwhelming. The source of that shame isn't revealed until the end of the story, but its roots are in his betrayal of himself, of his youthful ideals.

“Had words truly become light or heavy while he was away?” It must be difficult to speak after being isolated for so long. At the same time, Gus describes his protector’s speech with, “her words battered his ears like moths. There was no capturing them.” These descriptions are incredible. Words are too heavy to speak and too light to hear?

Language is one of the most powerful tools of empire; forcing a subject people to abandon their native tongue is a common means of oppression. By the time he's released from prison, Gus has been estranged from his language, an estrangement that is meant to signal a larger alienation. He's more at home speaking the language of the Marshmen; this is at the heart of his troubles.

“But poverty and disease — stepchildren of the war — are endemic, and no less deadly than bullets or shrapnel.” Don’t you wish that everyone would think of this before viewing war as an option? In some ways, poverty and disease are even more deadly. What of hate and loss? The Marshmen have lost a way of life.

War is the common denominator of human history. Is it inevitable? It certainly seems so. It's true that the Marshmen lose everything in the course of the story. This tracks with the experience of the Marsh Arabs of southern Iraq, whose civilization was effectively ended by Saddam Hussein. Saddam drained the marshes as a punitive measure, destroying an entire ecosystem and, consequently, the civilization based on that ecosystem. It's hard to imagine a more complete erasure than that.

“A woman, marked for punishment at birth, has simply been served another portion of her curse.” This sounds like life for so many women in the Third World — and half the First World, too. Do you believe that women are cursed?

The line you're quoting comes at a moment when Gus is identifying very deeply with the Marshmen — so deeply that he's able to imagine how the other women are thinking about the laundress who has appealed to him for help. She was born with a cleft lip; therefore, she's cursed. Therefore, bad things will continue to happen to her. He understands the Marshmen's superstitions, even as he deplores them. The laundress is cursed; the Marshmen are cursed; and, as it turns out, Gus is cursed, too. But you're absolutely right to point out the extra burden that the women bear in this story — and in the world generally.

How difficult was it for you to begin writing for young readers and then to write Marshlands?

Actually, you have it exactly backwards! I've always considered myself first and foremost a writer of literary fiction. That's what I was doing in the Graduate Writing Seminars at Johns Hopkins University 20 years ago, and what still constitutes the center of my writing life. The publishing world simply decided to receive my writing for young readers first.

Why do you tell the story in the order that you’ve selected?

The backwards-in-time structure imposed itself on the story after a few early drafts, when it occurred to me that what truly interested me was the origin of Gus' shame. The narrative arc, if you will, is a return to innocence. I wrote a little essay about this for FSG's Work in Progress blog.

Gus’ observations of the world he’s been turned out into as an old man are quite compelling; we don’t hear them so much in the world he chooses for himself when he meets the Marshmen. Is it a product of aging or prison that he has become so simple and so profound?

When Gus is released into the world at the beginning of the story, he feels that there's very little left of himself. I wanted to convey the sense that he's almost weightless, a wisp of a man capable of being blown about by the wind. Because he's so insubstantial, there are few barriers to the impressions that constantly wash over him. By contrast, when he's a younger man, he's much more fully engaged with the world. His own thoughts and ambitions preoccupy him.

You don’t explain a lot. Other books come with maps and a family tree. Do you believe that the details of place and culture added to a reader’s own baggage may be unnecessary?

I would characterize Marshlands as an allegory — an allegory of empire. I wanted the novel to feel at once very precise and very dreamlike, a narrative tactic perfected by one of my literary heroes, Franz Kafka. I'm glad you came away from the book feeling that I didn't explain a lot. My goal was to pose an intractable, tragic problem. But I do hope that the world of the Marshmen felt real — or at least fully imagined!

Gus is a man who went to prison, not that we know why or how, perhaps meddling in some other culture. Is Marshlands the story of his redemption? How is the new Gus different from the earlier one?

Perhaps I didn't make it quite clear enough, but Gus is sent to prison (spoiler alert!) for his complicity in the killing of a superior officer. But that's not the ultimate source of his guilt. The scenes at the end of the novel are the beginning of his moral undoing. I don't think of Marshlands as the story of his redemption. Redemption would imply a release from his sins. The chronological end of the novel suggests that Gus may have found a way to restore meaning to his life. I think that's the best he can hope for.

Gus is a doctor. Had he purposely or accidentally disavowed his oath?

One of the original ideas behind Marshlands was the paradoxical status of a military doctor — particularly one who monitors harsh interrogations. Those doctors do exist! It's hard to imagine a greater challenge to the Hippocratic Oath than to be ordered to resuscitate a prisoner so that he might undergo further torture. Gus feels this conflict very deeply. Nothing is more upsetting to him than the order to stop treating Marshmen at his makeshift clinic. He sees his military duties as a necessary evil; treating the Marshmen is a way for him to be true to his oath. He considers himself a healer. When that precious idea of himself is taken away, he loses everything.

J. Shepperd is senior features editor at the Washington Independent Review of Books.

Virginia Pye’s debut novel, River of Dust, is an Indie Next Pick for May, 2013. Her short stories have been published in numerous literary magazines, including The North American Review, Failbetter, The Baltimore Review and Tampa Review.

An Interview with Paolo Giordano

The novelist’s latest work, Like Family, is short, intense, and bittersweet