An Interview with Mitchell James Kaplan

The writer talks Judaism, capturing music on the page, and his new novel's unconventional path to publication. 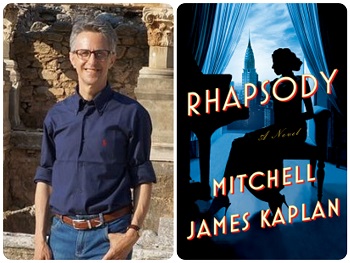 Mitchell James Kaplan and I were undergraduates together many moons ago but lost touch after graduation. Nevertheless, I lapped up his 2010 debut novel, By Fire, By Water, which tells a riveting story grounded in Ferdinand and Isabella’s expulsion of Jews and Muslims from the Iberian Peninsula in 1492.

His second novel, Into the Unbounded Night, explores early Christianity as it began to diverge from Judaism and develop separate doctrine. (This book helped Kaplan and me reconnect; we discovered we are both Regal House Publishing authors.)

And now comes Rhapsody, Kaplan’s third novel, an engaging, entertaining swing through more recent history. It centers on Kay Swift, a gifted pianist and composer who was George Gershwin’s lover for the last 10 years of his life. Kay grew up in modest circumstances and became fabulously wealthy after marrying the Jewish financier, James Warburg. Like Kaplan's earlier books, Rhapsody is peopled with real historical characters, many of which will be recognizable to readers.

Can you describe your trajectory to become a writer?

When I was in high school, novels were my refuge. Adolescence is such a difficult time. We seek ways to shape experience. For my adolescent brain, so much new data was entering the field of my awareness. I didn’t yet understand on an emotional level how to categorize and fit it into the narrative of my life. I needed these expertly crafted models of experience. A historical novel takes information from the “real world” and forms it into an emotionally comprehensible pattern. This same thing happens in every good novel, even in sci-fi and fantasy.

Novels represented a refuge from chaos — the chaos of hormones, of social complexities, of confusion about the changing role of family in my personal trajectory as I attempted to transcend childhood. I found that refuge in music as well, so much so that when I entered college, I wasn’t sure whether I would major in music or English literature. I was particularly drawn to long-form music with big emotional arcs. Beethoven and Brahms, for example, excel in that kind of thing.

I knew these places of refuge were what I most cherished, so there was no doubt I would become either a composer or a novelist, or perhaps both. In college, as my focus on literature tightened, I became more aware of individual words and how they worked together. I became fascinated with the sounds of language and connotative ambiguity.

The mechanisms of storytelling did not start to fascinate me until well after I had graduated from college. I was living in Paris and had a job that required me to work two hours every morning. I could read all day long after that. And that’s what I did. I read through French literature, just as I had read through English literature in college. And I thought a lot about narrative. What made one story impactful (for me) and another dull?

I came up with a whole bunch of ideas along those lines, and I suppose those ideas still inform the way I write, although I don’t think about them. When I write a novel, the process feels intuitive rather than analytical. But all that reading and thinking contributes in an unconscious way.

Judaism is a theme that threads through your novels. Can you talk about its importance in your own life, and how it makes it into your fiction?

The questions that surround identity — what it means both personally and on the social level, and how different identities interact — are crucial motors of history. A novel is a means of communication across identities. Reading Anna Karenina and Crime and Punishment (and other Russian novels) as a kid, I came to understand what it felt like to be Russian at the time those novels were written. Reading Rabelais, Molière, Balzac, and Proust (and other French writers) years later, I learned about the French experience. I also went through a period when I read a lot of Japanese literature. The preoccupations of the characters in these different traditions were not identical, but their humanity, of course, was universal.

There are two ways to think about culture. One is that it divides people into different groups. The other is that it creates bridges between groups — bridges of words, music, and visual experience. When I travel to Bangkok, what makes my experience there unique and enrichening is not the modern architecture, with its international sameness, but the old temples and palaces; not the contemporary music, which also tends these days toward global uniformity, but the particular flavor of the traditional music.

When artists sense their cultural identity is vanishing, they have an instinct that compels them to create monuments. Note, for example, the flourishing of Yiddish literature just prior to the Holocaust, when the distinct European Jewish identity was for all intents and purposes eradicated. Writers like Sholem Asch and Shalom Aleichem — and even, you might say, Franz Kafka and Marcel Proust — together and separately endeavored to create a tableau that preserved a complex portrait of that identity. That tableau serves today not just of reminiscence and nostalgia, but rootedness.

As an American Jew, I cannot escape the feeling that Jewishness — as a coherent subculture that brings extra meaning to each individual life — is increasingly irrelevant. And since that subculture, which I inherited with my DNA, feels precious to me, I want to explore it. The more deeply you explore any subculture, the more deeply you also explore our common humanity.

Music is notoriously difficult to render to the page. How was it writing a whole novel about music?

In reviews and other comments on Rhapsody, people have mentioned that it does a good job of translating the experience of music into language, but that was never my intent. It didn’t even occur to me that I was trying to do that. But music was central to the experience of my characters, which was my subject.

Your choice of title is interesting. Please talk about its multiple meanings, including referencing George Gershwin’s iconic “Rhapsody in Blue.”

Yes, good point. “Rhapsody,” as Kay observes in the book, suggests a loose musical form (as compared, say, to sonata form). But it also suggests a powerful emotional experience. As Kay develops from a classical artist to a jazz artist, she experiences a sense of increasing freedom both on the personal level and in her music, and this sense of increasing freedom feeds her emotional journey.

It was a fluke, like everything important in life. I was actually talking with this editor about my second novel, Into the Unbounded Night. She expressed to me that Into the Unbounded Night was more of a niche book, not appropriate for her imprint. She asked me if I had other ideas and I mentioned that I was working on a book about Gershwin and his girlfriend, Kay Swift. She asked me for an outline and 50 pages, so I whipped up what she needed and we signed a contract before I actually wrote the novel.

But I would not suggest trying this at home! You cannot cause things like this to happen. They just happen, and surprise you when they do. The job of the novelist is to write the best novels he or she can write. Show them to people, of course, but let the universe make the big decisions about how and where and when they find their audience. You just can’t control that kind of thing. (At least, I can’t.)