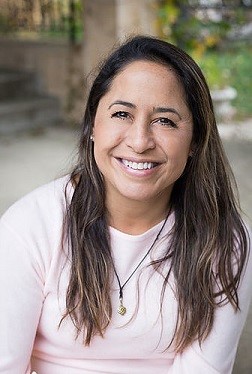 Inspired by her own experiences as a mixed-race child in an overwhelmingly white neighborhood and as the mother of children with skin lighter than hers, local author Maria Leonard Olsen has written Not the Cleaver Family: The New Normal in Modern American Families, a resource to the many permutations of family that exist today.

After interviewing a wide variety of people who are struggling for societal acceptance of their outside-the-box families — mixed-race, one-child, and adoptive families, same-sex and single parents, and couples who choose not to have children — she found that in this age of rapid social change, there is no such thing as the typical American family.

You come from a legal background. Why did you write this book about the modern American family?

My parents were forbidden by law to marry in the state of Maryland in 1961 because they were of two different races. Interracial marriage was illegal in 16 states until the Supreme Court's Loving decision in 1967. When I told my children this fact, they were incredulous, as were many other people with whom I have this conversation. I believe the battle for same-sex marriage is a parallel situation. With education, acceptance, and cultural evolution, the laws in our country have changed for the better. I wrote this book to be part of that development. It is a consciousness-raising work, depiction of how far we as a society have come, and call for even more inclusion and awareness.

For whom did you write this book?

I wrote this book for educators and caring citizens who wish to remain aware of and appreciate our evolving society. We still have much work to do. As I said in my first book, Mommy, Why's Your Skin So Brown? (Mirror Publishing, 2013), people today still let their curiosity overwhelm their manners in the things they say to people whose appearance does not fit their assumptions. For example, many people, including a pediatric dentist and Gymboree teacher, assumed I was the nanny of my light-skinned children.

You detail the radical ways that families have changed since the Cleaver family of “Leave it to Beaver” appeared on TV last in 1963. What do you think is the main factor behind those changes?

Many people are afraid of things that are not familiar to them. As different kinds of families became more visible in the media and in society at large, acceptance grew. Taboos melted away, at least in many areas of our country.

Is there anything of the Cleaver family to be found in today’s families?

I believe that, while cultural norms have shifted considerably, there is a romanticism lingering about families who resemble the Cleavers of the 1950s and 1960s. A white family with two well-behaved children, a wise father, and a perfectly coiffed mother still may represent the ideal for many. It is certainly changing, however. The U.S. Census Bureau reports that less than 50 percent of our country's population will be white by 2043.

You have been a foster parent for children awaiting adoption. How did that experience change you?

Being a foster parent increased my compassion for people facing certain struggles I was not called upon to endure personally. My empathy and understanding grew. While I did not agree every time with the birth parents' decisions, I understood in a way I may not have before the reasoning and circumstances behind their decisions. I am blessed to be a part of some of my foster children's lives. For that, I am so grateful.

Many people agreed to talk with you about something about which we are usually very private and protective of: the way our families are different from others. Why do you think people were so eager to talk to you?

When they learned about my story, they were more willing to open up. They could relate to my feelings of otherness as the only person of color in schools and neighborhoods. They respected my desire to increase understanding in our society. They want to be part of the solution, as do I. Education and awareness is a huge part of eradicating racism, homophobia, and fear.

Is there such a thing as the typical American family today?

Not really, other than to say that a family is what each individual decides their family should be. People who are child-free by choice are a huge and growing demographic, for example. The cultural imperative to have children is dissipating. Perhaps one of the greatest gifts of the feminist movement is the right for an individual to decide what is best for her. Typical does not equate with normal in the familial context today.

The Independent's David Stewart talks with the noted biographer of, among others, Joseph Pulitzer