An Interview with Max Hastings

The renowned historian turns his attention to the Cuban Missile Crisis. 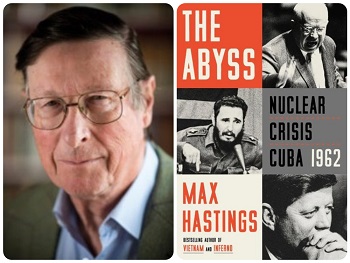 The estimable Sir Max Hastings, a journalist and military historian, is back with a fresh look at an old calamity. His new book, The Abyss: Nuclear Crisis Cuba 1962, leverages his unique perspective and narrative skills to help us see in a new way a time when the world came frighteningly close to nuclear war. A former correspondent for the BBC and editor-in-chief of the Daily Telegraph, Hastings is perhaps best known for his prolific nonfiction works focused on World War II and its aftermath, including Operation Pedestal, Inferno, and Armageddon. We recently spoke via Zoom.

You could fill a bookshelf with tomes about the Cuban Missile Crisis. What drew you to revisit it?

I guess everybody asks that question every time I write a book about the Second World War. One thing I always try and do with all my books, and I’ve done this time around, is to reframe the issues. A lot of the books look at the 13 days [of the Cuban Missile Crisis] in isolation. What I’ve tried to do is to look at them in the wider context of the Cold War by looking at what sort of nation Cuba was then, [as well as] the Soviet Union [and] the United States.

I think also, as a foreigner, there’s some things that we see in a completely different way from the United States — in that, during the crisis, our prime minister, Harold Macmillan, pointed out in the nicest possible way to President Kennedy that while Britain was giving total support to the American position publicly…privately, Macmillan was as frightened of an American error of judgment in this crisis. And secondly, he pointed out very politely to President Kennedy that legally and morally, there was no more reason why the United States should have the power to object to the Soviet Union putting missiles in Cuba than there was for the Russians to object to American missiles in Britain and Turkey and Italy.

And Americans, both then and now, took it completely for granted that it was completely unacceptable. They still had, I would suggest, a neocolonialist approach to Cuba, as they do to this day. And one of the things at the time [that] Harold Macmillan made plain in his diary, and so did many other British people, they didn’t believe that anything at stake in Cuba could possibly be worth the risk of a nuclear war. And secondly, they felt they had to support the United States because nobody doubted for a second that the United States throughout the Cold War was the principal bastion of freedom and democracy, and without the United States, we were all cooked.

While you generally praise JFK’s performance during the crisis, you question overall American policy toward Castro, from Eisenhower on.

Some of us would suggest that the Castros could never have survived all those years of their regime, long after the Missile Crisis, not only without the support of the Soviet Union, but without the enmity of the United States. It is one of those arguments that [has kept] the show on the road. And Americans, I think, are sometimes reluctant to look at this perspective. Now, I’m not arrogant enough to say that my perspective is the right one and those of American historians the wrong one. All I’m saying is, there is more than one way of looking at this whole issue.

We’ve talked a bit about Kennedy; tell us about the other principal player, Fidel Castro.

Castro was an egomaniac. He’d made himself in this extraordinary guerilla campaign that he waged. It would have been a much smarter move, I suggest, for the United States to have drowned him in aid and to have put up with some insults and to have tried to rub along with this guy. And indeed…one of the people who comes, to me, surprisingly well out of the story is Vice President Richard Nixon when he was serving under Eisenhower. He advised Eisenhower, having met Castro, that Castro should not be underestimated, that this was a formidably charismatic leader who, for all his enmity to the United States, for all the mad rhetoric and so on, was going to be a big force in Latin America, and Nixon advised the president that the United States should try and rub along with him. And Eisenhower wasn’t having it and…was determined to bring him down.

And then, of course, there was the disastrous Bay of Pigs in 1961, which again played straight into Castro’s hands. The great thing which distinguished Kennedy and Khrushchev from Castro — Castro was mad enough in 1962 to urge on Khrushchev that if the United States invaded Cuba, as they appeared poised to do, that the Soviet Union should launch a nuclear first strike against the United States.

Do you see echoes of history in the situation in Ukraine today?

And the same problem applies in reverse today with Ukraine, that we all desperately, passionately want to see the Russians beaten and Ukraine prevail. But one of the huge difficulties is the fact of geography, that Ukraine is right next door to Russia. And that geographical fact, just in the same way that the Russians, as soon as the United States discovered the missiles in Cuba, as soon as the United States woke up, suddenly the Russians realized all sorts of stuff they should have realized all along about the hellish hole they were in. It was extraordinary how naive they were.

Well, now suddenly, we’re forced to realize again that there are a lot of people out there who have vastly more nuclear weapons than they did in 1962, and we once again have Putin overtly threatening to use them if he’s challenged beyond a certain point. And I’ve suggested in my last paragraph [of The Abyss] that the message for a new generation of leaders is, “Be afraid.”

Michael Causey is the host of GET UP! on WOWD 94.3 FM Takoma Park, MD, and takomaradio.org.

An Interview with Lynn Kanter

The novelist talks Vietnam, feminist presses, and the birth of her audiobook.

An Interview with Nancy Thorndike Greenspan

The biographer discusses WWII, the Manhattan Project, and the complex legacy of a British traitor.