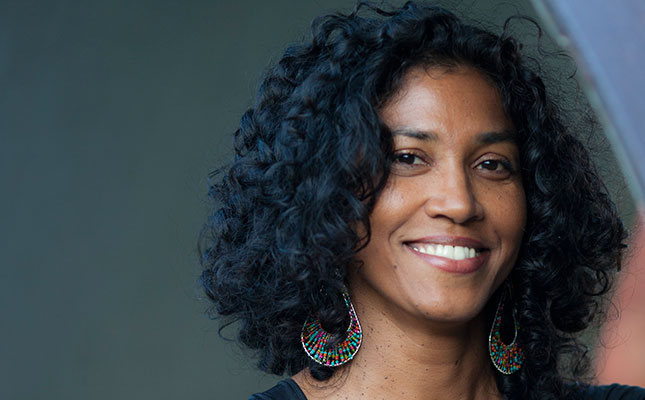 About All Decent Animals

All Decent Animals is Oonya Kempadoo’s third book of fiction. Set amid the distinct rhythms of Port of Spain, Trinidad, Kempadoo’s multifaceted and multicultural cast of characters confront the inevitable while Carnival, in all its music and madness, plays on. Friends gather to protect and cherish one of their own and learn about themselves through all the island’s capacity for humor, complexity and the love of living.

You never tell the reader where the main character, Atalanta is from, though we meet her arriving in Trinidad. Why? She seems a little rootless. Maybe it matters, maybe it doesn’t? Which is true and why?

That she feels Caribbean and not an island national contributes to her seeming rootlessness, to help portray her trying to find her place in a globalized world, like the other main character, between old world and new. When heritage involves more than one island/country/region, national identity seems irrelevant.

You describe the “Trini” way of talking, “overdramatizing everything with unpolished wit and raucous emotion ...” Then you add it all up to another excuse for another party. “Everything is celebrated.” Is this unique to the Trinidadian way of living? Is there a literary tradition that is also celebrated?

The Trini exclamatory language goes well with partying and “liming” (hanging out), which is very much a part of the lifestyle in Trinidad and, indeed, which Trinidadians are well known for. I think that the most celebrated form of this language, and Trini life is the lyrics of calypso. Because it is an oral tradition, and culture, these written words are not generally recognized as poetry or literature, but they are a written wealth.

In the book, Trinidadian tradition even claims Derek Walcott, who actually hails from St. Lucia. Is their a collective of Caribbean writers who feel a part of a common literary tradition? Is there a common point of view or reference base?

There is certainly a common Caribbean literary tradition, and as a writer you are aware of that, even though writers are scattered from island to the diaspora. I am not aware of a common point of view, and I hope there will never be one since literature, in all its reflective glory, evolves as life does and good stories transcend geographic locations.

Is there an island memory for Eric Walrond, the author of Tropic Death, his one and only book of fiction?

Island and Eric Walrond? Guyana may claim him, but it seems I must read this book now! Access to books connected to this region are easier to obtain outside of the Caribbean, and the literary-minded population of each country/island is small.

Part of the Trini tradition is “creolization,” and the characters mention efforts to  “Douglarize the nation.” Is this Frederick Douglass? And there are still layers of creolization — “Red Trinis,” and the differences between the mixes of Spanish and Black, French and Black, etc. Are the differences of degree, or do they have the added burden of separation?

Within the degrees of separation, the creolization continues. Won’t we always want to define? A politician made that quote popular in response to racial politicking, I’m not sure if he got it from Douglass. I meant it as a reflection of current affairs.

Fraser, one of the main characters, says, “Maturity must be the acceptance of compromised beauty.” Is this because we grow up, take a second look and realize what we once prized isn’t so perfect? Is it because we are eventually forced to let go of our pursuit of beauty for it’s own sake and accept a compromised form?  hose are my words, please explain in your ownwords.

Yes, we seek beauty to begin with, but maturity brings the acceptance of flaws and the whole.

For this reader, “steups” is a brand-spanking-new verb. Do you think it will make it into the American lexicon? Or is it already there and this reader didn’t know it? What about bullipscious?

“Steups,” the action of sucking teeth, a sound of disgust or frustration, may not be accepted or understood beyond the Caribbean lexicon because it is a cultural practice. Then again, languages, like the movement of people, merge and the sentiment is universal. “Bullipscious” is just an onomatopoeic word, in this case describing the look.

I love the way Fraser tells Ata how she is supposed to behave as he is dying: “... keep saying reassuring things.” She answers that those words were “hiding all up in the ceiling-corners of the room. Watery cobwebs hanging there, useless.” How is it that words are so powerful and yet, too, so weak? Is it all in the way that they can be arranged? Disarranged?

Words are exactly that, powerful yet ethereal and fluid. They can be invisible when faced with other instinctive forms of communication.

Is writing, for you, like putting together the pieces of a puzzle? Please tell us how you would characterize the way you write?

Writing puzzles and intrigues me! It is a process that I lose myself in and come out the other end with many realizations, about self also, but with many more questions too. It is a form of inquiry and an extension of personal/psychosocial development.

What is it about Carnival in Trinidad that makes you juxtapose it to a friend dying of a terrible disease? Carnival is a living, breathing thing that slowly builds up, explodes and then it’s gone. Like the life of a close friend?

The beauty of the written word is that it can be interpreted in any direction by the reader, and each interpretation is valid, from which the author learns much. In respect of this exchange, Port of Spain as a whole could be compared to the life of a friend, with Carnival one incredible part of it.

How difficult was it to try and capture Carnival in words on a page?

Less difficult than trying to make the messy connections to character narrative and development. Carnival is dense, and so immersing myself in its words became consuming.

I love the way you describe clumsy fathering, “As if Charles could just take all of his clumsy fathering and crack it on Fraser’s [his son’s] head like an egg, cook it up and somehow make his son whole again.” Even all the village couldn’t put him back together again. Of course, I’m thinking of Humpty Dumpty, were you?

Not consciously, but these metaphors do enter our subconscious. I just wanted to find a runny, messy and tangible way of describing it.

You describe the Catholic Church like antique jewelry, and this reader can’t help but make imaginary necklaces out of so many stained-glass windows. But then, I think also of a another metaphor too, wearing one’s religion. Is there a reason that the jewelry is antique?

The antiquity of Catholicism, its aged trappings and because it seems dated.

You tantalize the reader with the island history in stories such as Dominique Dert and Jacquet’s, a slave owner and his steward, who allegedly poisoned many of his slaves. Why did Father McBarnette tell Fraser this last story?

As reluctant as I am to explain beyond what I’ve written, this part I had to be clear on and so will share. Some priests talk in riddles and this one uses history. He tells Fraser the story of poisoning one’s own kind, while Fraser has chosen euthanasia, as an illustration of historical self-preservation practice. Preservation of the spiritual self and dignity. It is one’s choice and inherited, as he shows it, “Poisoned blood is in our veins ...”and in this way the priest is able to comfort and bless Fraser beyond the confines of religion.

An Interview with A.S. King

The YA writer talks surrealism, transcending genres, and the thrill of a second Printz Award.