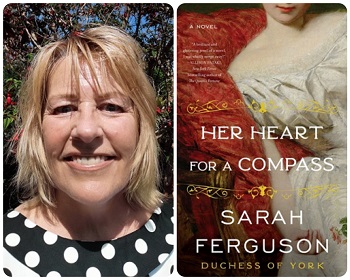 Her Heart for a Compass, which came out last week, was the most anticipated royal historical novel of the year. Authored by Sarah, Duchess of York, in collaboration with Marguerite Kaye, the story is a fictional account of the life of the duchess’ great-great-great-aunt Lady Margaret Montagu Douglas Scott, who was a close acquaintance of Queen Victoria. The book is Ferguson’s first adult novel. The Scottish Kaye, however, is an award-winning romance author of more than 50 books.

Her Heart for a Compass is one of the hottest books of the year. How did your collaboration with the duchess come about?

My U.K. publisher, Mills & Boon, recommended me to the duchess as a possible collaborator. I got a call from my editor completely out of the blue asking if I would be interested in the project, and though at that point I knew very little about the story, I, of course, said “yes.” When the duchess and I met in person to discuss the project, we immediately hit it off. For me, establishing rapport was the most important thing, and happily, the duchess felt exactly the same. It was vital, we agreed at that very first meeting, that we understood each other, that we [were] open and honest throughout the writing process, and maybe most importantly, that we [had] fun.

Did you and the duchess start with a germ of a plot or a single character?

Lady Margaret Montagu Douglas Scott is the second daughter of the Duchess of York’s great-great-great grandparents, the Duke and Duchess of Buccleuch. The Duchess of York became fascinated by her when researching her own ancestry some time ago. When she could find next to nothing about the real Margaret, the duchess became determined to find a way to tell her story — to write the invisible woman into history. So, when we started writing, the duchess had a really vivid and clear idea of who her heroine was and of the emotional journey she would take. She also had quite a strong idea about the physical journey Margaret would make.

Margaret’s story moves from the drawing rooms of Queen Victoria’s court and grand country houses in Scotland and England to the slums of London and the bustle of New York. What was her motivation to break the mold of her heritage and forge her own path?

Margaret was born into one of the most powerful and influential families of the day. Her mother was a lady in waiting to Queen Victoria, and her father was a friend of Prince Albert, the owner of vast estates in Scotland and England, and a leading philanthropist. The daughter of such a family would be expected to conform to the rules of court and high society with one purpose — to marry well and produce the next generation. But our heroine was a feisty young woman who wanted to live life on her own terms. She wanted to have a purpose in life and see and experience the world outside the bubble of high society. She wanted to use her incredible privilege to serve others. Margaret was essentially an independent woman, and that was a very hard thing for any young woman to achieve in the high Victorian age. This book is primarily a coming-of-age novel with the focus on Margaret’s journey, literal and emotional.

Did you and the duchess do all the research for the book, or did you work with other researchers?

There’s a massive amount of history in this book — the duchess and I are both history geeks. I did a huge amount of reading, as you can see from my Goodreads list. In addition, we had two fantastic researchers to help us who fact-checked everything and clarified who was where and when in terms of the real characters. They also helped us with maps and planning some of the travel details. In the process, they turned up some fantastic, colorful characters, some of whom were crying out to be put on the page. Lewis Strange Wingfield, Lord Powerscourt’s brother, is one of those. He is one of those historical characters that you simply couldn’t make up — an actor, an artist, and a man who loved to be anything other than who he was. It was our researchers who brought in American writers Mary Louise Booth, the first editor of Harper’s Bazaar, and Jenny June, the columnist, both of whom played a key role in Margaret’s development.

I am always fascinated by how co-authors work together. How did your work partnership come about?

We started out with some face-to-face sessions, and the plan was to continue on in that manner, but then lockdown happened. We used WhatsApp, email, and a lot of phone calls instead, spending untold hours talking and working and reworking every aspect of the story. The pandemic forcing us to work like this was an escape from reality and actually brought us much closer together. The duchess and I have become close friends now, touching base just to say good morning most days.

Do you and the duchess have other joint projects planned?

I can reveal that we are already working on a new project together. I can’t say much more yet, but it will be another period drama and will build on the world we’ve created for Her Heart for a Compass.

The Earl Who Sees Her Beauty, the first in my Victorian series, Revelations of the Carstairs Sisters, will be released by Harlequin Mills & Boon in October. The series focuses on the “invisible” woman theme which runs through Her Heart for a Compass, and there is, with the duchess’ permission, a fun tribute to her: a secondary character called Sarah who gets her own romance.

A CIA analyst conducts mind control experiments by day and plays normal husband and father at night. Half World explores the inner world of Henry March.