An Interview with James McGrath Morris

The biographer talks Tony Hillerman, cultural appropriation, and the allure of the Southwest. 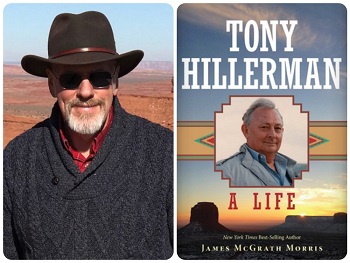 James McGrath Morris’ recently released Tony Hillerman: A Life has been named a finalist for an Edgar Allan Poe Award from the Mystery Writers of America. Five previous nonfiction books have won a fistful of honors and prizes. He also founded Biographers International Organization and was a leading member of the Washington, DC, writing community for many years. Morris now lives in New Mexico, like the subject of his latest biography.

Your diverse biographical subjects have largely involved people not much like you — an immigrant newspaper tycoon (Joseph Pulitzer), a Black female journalist (Ethel Payne), globetrotting literary novelists (Ernest Hemingway and John Dos Passos), and a newspaperman who killed his wife (Charles Chapin). What was it like to write the life of a man whose trajectory more nearly resembled yours — a white male ex-journalist with a family who settled in New Mexico to write books?

It wasn’t until I was done with the manuscript that I became aware of the commonalities between us. I missed seeing them at first because I was so focused on gaining an understanding of Hillerman’s youth in an isolated town during the Great Depression, his near-fatal service in World War II, and going to college on the G.I. Bill — all things which I had not experienced. But when I approached the end of my project and began that process of summing up, I thought to myself that when it all boils down, Tony and I were two Anglo immigrants to New Mexico in search of a story. I may not have explicitly made use of the connection, but it is certainly part of the subtext of the finished book.

With all the tumult around the cultural appropriation of stories, what has been the response from the Navajo and Native American communities to this book — a white guy writing about a white guy who wrote about the Navajo?

Cultural appropriation is a real and important matter to Native people such as the Diné (Navajo). So, when I run into an objection from a Navajo about my book, it’s less because I’m an Anglo and more about discomfort with what Hillerman did. I offer a comprehensive evaluation of whether Hillerman’s work transgressed into cultural appropriation. My reporting includes the views of Navajos and others who object to his books, as well as defenders of his work, which includes many Navajos. Look, he certainly can’t easily be made into a villain. For every Navajo critic, there is a [Navajo] fan. Older Navajos recall with fondness reading his works, and now, with permission of the Navajo Nation, a new television series [based on Hillerman’s work] has been filmed on the Navajo Nation.

One of the maxims of biography is that to avoid meddling by family members, “First, kill the widow.” Yet the Hillerman family seems to have cooperated fully with your efforts. How did you manage that?

I was fortunate in several ways. First, the literary estate is controlled by Anne Hillerman, Tony’s daughter, who was a journalist and is now an author of books. In fact, she has continued her dad’s series of Navajo mysteries. Because she was a journalist, she understood the necessity of this book being written as an independent work, not as an authorized biography. So, we reached an agreement: She could read the manuscript twice. If she found a factual mistake, it would be corrected. If she found something that was objectionable, I and the publisher agreed to give the matter serious consideration, but the decision about it would remain ours. I also offered the Hillerman children an opportunity to read those portions of the transcript from their interview that I quoted from. In the end, it worked out well for both the Hillerman family and for myself.

I love Hillerman’s books, but they will not often appear on the reading lists for graduate literature seminars, unlike the novels of Hemingway and Dos Passos. Did you find it deflating at all to be writing about a novelist who described himself as an entertainer, and whose books might be classed, in Graham Greene’s phrase, as “entertainments”?

Nothing deflating about doing that. Hillerman recognized that he was writing a form of entertainment. But in writing this biography, I contend that he made two remarkable and significant literary achievements. First, he used the unassuming genre of mysteries to introduce to the outside world the cultural and spiritual world of the Navajo Nation. People around the world learned all about Navajos in a respectful and interesting fashion through his books. Second, he opened up the genre to include a wider cast of characters. If you recall, in 1970, when Hillerman’s first mystery appeared, it featured a Navajo tribal police officer. Had you been perusing the mystery shelf of a bookstore back then, you would have [found] almost exclusively white male and female sleuths. Introducing a native police officer was a groundbreaking achievement.

Was there anything you couldn’t figure out about Hillerman that still bothers you?

Actually, no. There are bound to be mistakes in the book or things that I could have done differently. But I’m happy and proud of the book.

At least early on, Hillerman’s editor seemed more involved in shaping his books than seems to be the model for current writer-editor relationships. Do you think that’s true?

It was certainly true in Hillerman’s early years as a novelist. Joan Kahn, the editor who discovered him, helped him shape his first books, and what she did made all the difference in making his books succeed. Sadly, that kind of relationship changed over time. In his later years, the trade house, feeling the roof was about to fall down on them — read that as panic over Amazon, the weakening of independent bookstores, and the arrival of e-books — cut back on editing, particularly copyediting. As a result, many of Hillerman’s later books are filled with mistakes that could’ve easily been caught.

Why are there so many excellent writers in New Mexico, the 36th most-populous state, and one far from the publishing industry’s center in New York?

If you’re a writer, you can work anywhere. Sure, you might have to go somewhere to do some research, but essentially you can live where you want. Aside from its stunning beauty, our state is so fundamentally different than other states that it feels like one is living outside of the United States yet remaining within its borders. In short, it offers an expat life, a kind of high desert Paris of the 1920s. It isn’t just a warm, sunny spot on the North American landscape, it’s a state with a fascinating history, a vibrant multiculturalism, and a wonderful and supportive writing community.

David O. Stewart, whose latest novel is The New Land, serves on the board of the Independent.