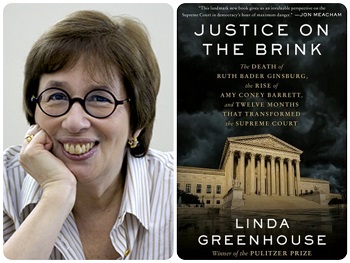 In her new book, Justice on the Brink, veteran Supreme Court correspondent Linda Greenhouse details, in month by month chronology, what she calls the transformation of the court in a term marked by the death of Ruth Bader Ginsburg and the appointment of Amy Coney Barrett to the seat that Ginsburg had occupied for 27 years.

Let me begin by asking about the title you chose: Justice on the Brink. What did you mean by it?

I meant to suggest “on the verge of tipping over the edge.” Of course, some people might think the court is now on the brink of something great, but I’m not one of them.

Your prologue details President Trump’s presentation of Barrett as his Supreme Court nominee from the Truman Balcony and before an invited crowd of Republican officeholders and conservative bigwigs. You describe Barrett in the title as “The Chosen One.” What do you mean by that description?

When Justice Kennedy retired and Trump was urged to select Amy Barrett, his answer was, “Not yet, I’m saving her for Ginsburg.” So, in that sense, she was chosen — selected — in advance of a vacancy. In a deeper sense, she was embraced by the Federalist Society and conservative leaders of the legal academy years earlier, groomed — and you might say chosen — and placed where she might, with luck, be in the right place at the right time.

You say in your opening chapter that you were trying to answer the question of whether the 2020 term was to be the dawn of the Trump court. But as the term ends, you quote Trump telling one of his political rallies that he is “ashamed” of “our Supreme Court.” So is that the answer? It’s not Trump’s court?

The court didn’t yield to Trump’s demands to undo the election, and that’s all that Trump happened to care about. But for the rest of us with a wider lens, it was certainly in many respects the Trump court that enabled the astonishing 13 federal executions and that, on Sept. 1st, permitted S.B. 8 [the Texas abortion ban] to go into effect without a second glance. And although we don’t know how Dobbs [the Mississippi abortion case] will come out, it was the Trump court that granted [a writ of certiorari] to Mississippi’s petition. No previous court would have done that.

You open the book by noting Chief Justice Roberts’ “triumph” in the 2019 term. You note that Roberts dissented in only two of the term’s 53 signed decisions and that he was in the majority on such other issues as presidential immunity, immigration policy, religion, abortion, protections for LGBTQ employees, and nearly everything else. What does that record say about Roberts’ leadership of the court?

I can’t and don’t claim that his voting record shows leadership. I actually don’t think that chief justices are in much of a position to lead. But it certainly shows that Roberts was in sync with the center of gravity of the court that bears his name.

By the middle of the 2020 term, however, you describe Roberts’ “isolation on the Court as…ever more apparent,” as seen in his first-ever solo dissent in an 8-1 decision. You also note that Justice Gorsuch “was developing a specialty in taunting the chief justice.” Did Roberts lose influence because of the new justices?

The new justices certainly showed no evidence of wanting to give him cover. I thought Gorsuch was pretty rude, repeatedly.

You write in the final chapter that the justices all share “the pretense that law is all that matters…that the departure of one justice and the arrival of another are extraneous to the action on the stage.” Are you trying with your account to show that that pretense is simply false?

I’m suggesting that it’s a pretense we are generally content to live with — until reality hits us in the eyes, as it did in the 2020 term.

As the 2020 term ended, you note that conservatives were disappointed that the court did not overthrow the Affordable Care Act but that conservatives also won significant doctrinal points on property rights, free exercise cases, and voting rights. How, then, did you evaluate the term overall?

I actually don’t offer a sound-bite evaluation. I explain that any Supreme Court term is a snapshot, a piece of a dynamic process. By that, I mean you have to look not only at what the court decided but how it handled its docket-setting function. By granting [a writ of certiorari] in Dobbs, in the New York concealed-carry case, and in the Maine parochial-school-tuition case, the court set the stage for highly conservative outcomes in the 2021 term. As I said, no previous court would have granted Dobbs. And the court had twice before turned down free-exercise challenges to the precise Maine tuition program at issue in the new case. I have no doubt that the three Trump-appointed justices have anchored the Supreme Court on the right to a degree not seen since the 1930s.

Kenneth Jost is author of Trending Toward #Justice and the annual series Supreme Court Yearbook (CQ Press). He is a graduate of Harvard College and Georgetown Law School and has covered law and justice as a reporter, editor, or columnist for 50 years. His blog is Jost on Justice.