An Interview with Kristina Gorcheva-Newberry

The debut novelist talks Chekhov, the USSR, and the allure of writing in English. 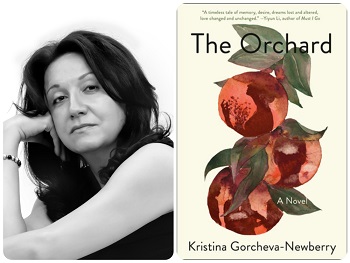 In The Orchard, Kristina Gorcheva-Newberry’s powerful debut novel loosely based on Anton Chekhov’s play “The Cherry Orchard,” four teenagers grow inseparable in the last days before the fall of the Soviet Union — but not all of them live to see the new world arrive.

Unflinching, exquisitely imaginative, and imbued with the sense that more than just schoolgirl innocence is ending — hindsight is 20/20, after all — this coming-of-age novel is difficult to read against the backdrop of 2022.

A panelist at this year’s Washington Writer’s Conference, Gorcheva-Newberry, who is funny, warm, and refreshingly outspoken, recently talked to me about her book’s prescience, Russia’s history of political chaos, and the loss not only of childhood friends, but ultimately, of her homeland, too.

The Orchard grew out of your short story “Champions of the World.” What were some of the hallmarks of that story that allowed for its expansion?

Length. I first wrote “Champions of the World” as a graduate student at Hollins University. While most of my peers loved the story, they thought it would never get published because it was too long — 40 pages. But it got picked up by the late Jeanne Leiby at the Southern Review. I only had to shave off a page or two. Also, there were many descriptions in the story — the landscape, the flats, how things looked, smelled, and tasted — and that allowed me to expand and build on [the narrative]. The tone of the piece has always been a bit wistful and ruminative, perhaps befitting a novel more than a short story, because I wanted that voice to cast a spell over the reader and carry her forward long distances. And finally, and most importantly, the timeframe made it possible to turn the story into a novel. “Champions of the World” is comprised of two alternating narratives — Anya’s past and her present, juxtaposing her concerns and dreams as a teenage girl in the USSR with her memories and fears as a 40-year-old woman in America. So, I had all that time in the character’s life that I wanted to explore in depth, her secrets and desires, the loss of childhood friends and her home country, which had transmogrified over the two decades into something very different yet just as dangerous and incomprehensible.

Like your protagonist, Anya, you came of age in Russia. Because you write Anya using the first person, did you sometimes feel like you were writing a memoir instead of fiction? Did you borrow anything from your own life and recast and replay it in the novel?

No, I hadn’t felt that I was writing a memoir, even though some things — snippets of conversations, the political climate, and historical backdrop — are real. I came here in 1995, after witnessing perestroika and the subsequent collapse of the Soviet Union, so the feelings of chaos, disillusionment, uncertainty, and fear — for one’s life, for one’s future, for the future of your children and the entire nation — all that is from my own experience and very much present in the novel. Two friends were killed during perestroika. One girl, a neighbor, disappeared when she was 15; I’ve never been able to find out what happened. The Orchard grew out of that loss, the inability to mourn someone other than through a narrative act. I think that fiction writers revisit and revise their past in their stories because it continues to haunt them, because they keep searching for answers nobody can give them but that must exist somewhere, tucked deep into the folds of their imagination. It allows us to go on, to survive in a world where, according to Toni Morrison, “we’re all of us victims of something.”

It was hard for me to read this book and not imagine it against the backdrop of Putin’s own presidential curtain. Have you also thought about your characters — especially Anya’s parents — and what they might have had to say about Putin and his brand of nationalism?

Putin’s nationalism is really marketing for power. I think, hope, that Anya’s parents would be deeply ashamed and also horrified of what has happened to their country. Maybe they would’ve given up everything they’d worked for so insanely hard for and moved to America to live with Anya and her husband and cultivate their apple orchard. Listening to Anya’s grandmother’s war stories, and having survived WWII as children, they would’ve never supported the invasion of Ukraine.

As someone who maybe, maybe read one Chekov story in high school, I don’t know much about him. Can you talk about the influence “The Cherry Orchard” had on this book?

The Orchard is indeed my humble homage to Chekhov’s play. The idea came to me one summer when I visited Russia and watched “The Cherry Orchard” at Moscow Art Theater, where the play had first been staged a century ago. The similarities between Chekhov’s play and my story were disconcerting. Just like Chekhov’s characters, mine, too, seemed to have been trapped in the country’s historic past, the never-ending poverty, class struggle, and the abuse of power. And many arguments and conversations Chekhov’s characters held onstage sounded heartbreakingly familiar, reminiscent of those my friends and I had in 1987, right after we graduated. When I left the theater that evening, I knew that I wanted to write a novel about four young people coming of age in the USSR in the 1980s, and also to explore a personal tragedy instigated by a collective nightmare: the political chaos and utter lawlessness my generation had endured and that continues to haunt Russians today.

Russian is your first language, but I believe you write fiction in English. Is this important to your process, and have you always put English down on the page?

Yes. It’s true. Russian is my first language, but I only write fiction in English. I conceive it in English, too. I’ve always loved this language — how direct it can be. Everything is done by verbs. I started writing as a graduate student at Radford University. In fact, I don’t know if I would’ve become a writer had I not gone there for my master’s degree in English. I took a class on women’s literature, where I’d first encountered the works of Toni Morrison and Virginia Woolf. These two magnificent authors changed my life. I revere their novels, which are both heart-wrenching and sublime. Their humanity is astounding; their mastery of the craft is absolute. How can one not want to write in English after reading their work? I’m in awe!

George Black is the author of Empire of Shadows, the epic story of the conquest of Yellowstone, a landscape uninhabited, inaccessible and shrouded in myth.