An Interview with Nick Flynn

The writer/poet/playwright talks process, imagery, and the psychic difficulty of crafting his latest memoir. 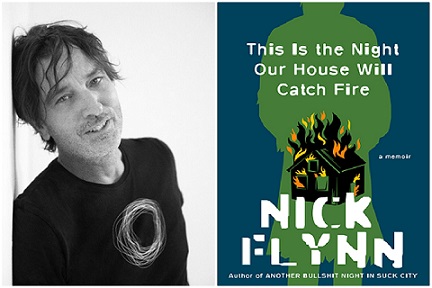 The title of Nick Flynn's new memoir pretty much says it all. When he was 6 years old, his mother set fire to their house while he and his brother slept inside. In This Is the Night Our House Will Catch Fire, Flynn unravels and retells the story of that fire and the ways in which we all carry fires with us until we figure out how to extinguish them.

In Flynn's case, he turns his memories into the bedtime stories he tells his young daughter, returning with her to Massachusetts and the Scituate neighborhoods of his youth. Their trips are the scaffolding that holds the book together, but it's Flynn's internal journey that truly gives the memoir its graceful and — with his use of literary analysis and philosophical theorems — intellectual shape.

Given the book’s straightforward yet beautiful composition, it's no surprise that, in addition to three previous memoirs (including Another Bullshit Night in Suck City), Flynn is the author of four volumes of poetry. His writing is exact yet impressionistic, a sentence both contracting and mushrooming like time-lapse photography.

If he’s not expanding the universe, he is pushing deep into it, revisiting a childhood filled with trauma and loss and reconciling his past with the decisions he's made as an adult — and the damage those choices have visited upon others. In a literal sense, he is returning to a burning house over and over, hoping for a different ending. Freud calls this repetition compulsion; it's also Flynn's eternal muse.

I, too, grew up in New England, near a beach similar to Flynn's Peggotty Beach and not so far from his childhood home. If we were seated across from each other, I'd tell him all about living in Stonington Borough, in a tiny 19th-century fisherman's house just around the corner from where Flynn’s wife, actress Lili Taylor, filmed “Mystic Pizza.” The way he describes the smells of the saltmarshes and the loneliness of the landscape brought me back home, where we writers inevitably go to roost.

But, for now, Flynn and I take our seats over email.

“David Shields is a friend of mine” is a sentence I never thought I'd write. Like Shields — especially in his The Thing About Life Is That One Day You'll Be Dead or The Trouble with Men — you push against the conventional, redemptive form of memoir. Yet, somehow, your new memoir, written in snippets and pasted like a collage, is more immediate, intimate, and revealing than the traditional (let's say chronological) structure so often found in memoirs. This acrobatic structure requires the reader to be just as active in their job, which is a very long way of asking: Is there something about the lawless structure that's more freeing for you as a writer?

First, I, too, love David — we are lucky to be alive at the same time as him. As for the structure of the book, I like that you say you found it “acrobatic,” forcing the reader to be just as active in their job — it reminds me of that Whitman quote:

“The process of reading…is not a half-sleep, but, in the highest sense, an exercise, a gymnast’s struggle...the reader is to do something for himself, must be on the alert, must himself or herself construct indeed the poem, argument, history, metaphysical essay — the text furnishing the hints, the clue, the start or frame-work. Not the book needs so much to be the complete thing, but the reader of the book does.”

This quote was a guiding force as I put the book together, the idea that without a reader — an active reader — a book is a lifeless object. That you found the collage technique to feel immediate and revealing — it is closer to how “reality” is for me.

Among the many writers you quote, a passage in Bessell van der Kolk's The Body Keeps the Score seems crucial to the structure of your own book: "It is enormously difficult to organize one's traumatic experiences into a coherent account — a narrative with a beginning, a middle, and an end." Yet you still must make sense of your story. Did you do that by putting all of your material into thematic silos, slicing and stacking them until they felt right?

Maybe you should design and patent these “thematic silos”; I would definitely buy. The problem with how to navigate the release of information is always a vexing one, but I end up enjoying puzzling it out. For This Is the Night Our House Will Catch Fire, an organizing principle was the three trips I took with my daughter back to my hometown once a year, starting when she was 7. Each trip was to manifest for her a story I had been telling her about when I was her age. Each story centered around a specific site in my town (a saltmarsh, a hermit’s house, the house that caught fire). In some way, in the end, everything radiates out from these three journeys.

Did you also consider imagery — fire, mice, stones — as guides? Your story is so cinematic, it's easy to imagine you shooting and then editing a lot of film.

I became aware, at some point in the process, that certain images keep rising up, recurring…how the stones my daughter gathered from the saltmarsh ended up on my desk and how they reminded me of birds’ eggs and how my wife and I spend time each day looking into the sky at birds and if you keep looking into the sky eventually stars appear…it seems, at a certain point in any project, that everything is connected, that everything is speaking to everything else, and I find this thrilling, almost mystical.

Memoir as a genre often gets a bad rap. After writing his own memoir, Shalom Auslander found himself in a bookstore before a reading and wrote about the experience, saying, "The memoir section in this store is enormous. Can this many lives be interesting?” It's hard to compete with a mother who sets a house on fire, but I'm wondering if you felt it necessary to push the boundaries of memoir with this book.

I think the answer to Auslander’s question is yes, every life is interesting (I imagine he would agree). As for pushing boundaries of memoir, I think of Thomas De Quincey, an early “memoirist” (Confessions of an English Opium-Eater, 1821), who Richard Holmes captures perfectly in this quote:

“Thomas De Quincey himself had strong views on the shortcomings of conventional biography. He believed it was ‘wearisome and useless’ when merely ‘chronologically arranged,’ as a slavish narrative of events. This merely produced ‘the hackneyed roll-call’ of a man’s life.’ The essence of any life was its ‘doubleness,’ its exterior and interior existences, and the access to these was governed by ‘single’ scenes and ‘deep Impressions.’”

This, too, was a touchstone for me as I wrote this book — to avoid anything that drifted into a “hackneyed roll-call.” To break from chronology, to see that chronology is an invention, is very liberating.

Along those lines, what's your favorite under-appreciated memoir?

I’ll name two off the top of my head: D.J. Waldie, Holy Land, and Kelle Groom, I Wore the Ocean in the Shape of a Girl. I don’t know if these are underappreciated, but each is utterly original. I also love Joe Brainard, I Remember, and Jacqueline Woodson, Brown Girl Dreaming (a memoir in verse!). A couple new memoirs just out: Melissa Favelino, Tomboyland (which I’ve read and love), and Alisson Woods, Being Lolita (which I’m looking forward to).

In this book, you toggle between young Flynn and adult Flynn, covering difficult territory throughout. Which Flynn was hardest to write about?

This was a hard book, psychically. Going back to when I was 6, to our housefire, was rough. But where I was when I began the book — which I think mirrors in some cosmic, Saturn-return way where I was when I was 6 — was also rough. I believe they were both part of the same struggle, and so hard to pull one out without the other following. I might have more compassion for my 6-year-old self, but that didn’t make it any easier to go back.

You mentioned in an interview that creating art can be both cathartic and derailing. Taking your psychological picture every day is grueling. Did you limit yourself to a set time to write? Were there days when you just closed up shop and watched reruns of “Friends”?

Not “Friends,” which I never related to, but the new “Sherlock,” yes. I also needed to concentrate my writing time into very contained segments and not let it bleed into my daily life. I really wanted to be able to put the book down and not to be always carrying it inside me — something I’ve done with other books, and I am sure is not pleasant to be around.

I read that meditation for you is a way to access the psychic realm. Your chapter “Whirlpool” was pretty trippy. I noticed places in this chapter and throughout the book where you bring in quantum mechanics and astrophysics and the notion of our ever-expanding universe. You write, "They also say that the universe as we experience it is just one of a gigantic number of worlds. Some are almost identical to ours while most are very different." While reading, I kept thinking about “Dark,” a German series about time travel that's really more about the existential implications of time and its effects upon human nature. Have you watched it? It would make a great pairing with your book!

I will check out “Dark.” The last memoir I wrote [The Reenactments] circled around concepts of neuroscience and memory — that became my research. This one, yes, circles around quantum physics, questions of the universe…it just seemed that traveling back in time to when I was 6, and having a daughter the same age, was like being in a time machine, a spaceship. It seemed as impossible as going to Mars.

An Interview with Marc Nieson

The writer discusses the unique process of crafting a memoir.