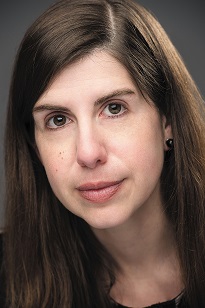 Not much is said about the many women who worked silently on one of the most secret programs of World War II: the Manhattan Project. Author Janet Beard set out to correct that with her new novel, The Atomic City Girls.

How was the writing process for The Atomic City Girls different from your first book, Beneath the Pines?

I knew a lot more about what I was doing with the second book. I started my first novel not long after graduating college and wrote most of it while working on my MFA. I was learning a great deal as I wrote, and I was able to put that to use in writing The Atomic City Girls.

Your grandmother was one of the women who worked on the Manhattan Project. Was she an inspiration for this novel?

I actually didn’t find out that my grandmother Eunice had worked on the Manhattan Project until I had started researching the book, and she told me! She only did administrative work for the project for a few months in Knoxville. But Eunice gave me an excellent perspective on what it was like to be a young woman in that era. For instance, although she was valedictorian of her high school class, Eunice didn’t even consider going to college because that wasn’t something girls in her world did. That was one of the biggest regrets of her life.

We always hear about the men who worked at the Oak Ridge, TN, facility, but never the women. Why do you think that is?

Generally, history focuses on the people at the top and in charge and, in the past, those people were usually men. The stories of the brilliant atomic scientists, military strategists, and political leaders who headed the Manhattan Project are fascinating. But I’ve always been drawn to the characters in the background, who are often women.

In the novel, we see a wide array of characters from different backgrounds, faiths, social status. How difficult was it to write such varied characters?

It was an exciting challenge. I began with researching real people who had worked in Oak Ridge, and then developed the characters, inspired by what I had read. Once I knew more about who the main characters would be, I had to do another round of research to flesh out their backgrounds. At that point, I had a strong sense of them and their voices.

June is the character who grows most in the book. Would you agree?

Yes. June’s is a coming-of-age story. She begins the book unsure of what she wants from life but deeply curious about the world around her. By the end, she has learned a lot, not only about the bomb, but also herself.

Which character did you particularly connect with?

June is the closest to me in some ways, but I think I became most emotionally invested in Joe. His main motivation is love for his children and his surrogate child, Ralph, and in many ways, the stakes are highest for him. While working on revisions to the novel, I had a child of my own, which deepened my understanding of his anxieties and sacrifices.

While you were doing research for the book, was there something you found out about the women of Oak Ridge that you didn’t know before?

I learned countless wonderful details from reading interviews and oral histories with Manhattan Project veterans. Generally, I was surprised by how fondly many of them remember their war experience in Oak Ridge. Of course, life was difficult, and they were working on something awful, but for many young people, this was their first time away from home. They were in a unique and diverse environment surrounded by other young people. The Army provided roller rinks, bowling alleys, dances, etc., and the young women had a lot of fun. (Many met their future spouses, too!)

Are the photos in the book part of your grandmother’s personal collection?

No, no at all. They were all taken by the official Army photographer of Oak Ridge, Ed Westcott. Because of the secrecy of the project, no one else was allowed to take photos within the military reservation. Westcott’s photos are a wonderful visual documentation of life in Oak Ridge and were a great resource to me in writing. I’m thrilled we got to include them in the book!

I hope they learn something about this unique place and the people who were working in the background of one of the pivotal moments in world history, as well as think about the moral dilemmas provoked by that moment and how they continue to be relevant to us today.

Tell me about your future projects. Is there a new novel in the works?

I’m currently working on another novel set in East Tennessee looking back at six generations of women and inspired by Appalachian folklore — in particular, murder ballads.

An Interview with Nelson DeMille

The bestselling novelist is back with a brand-new protagonist.