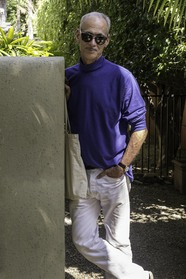 John Waters, 70, cannily employs humor as a subversive tool. For example, “Hairspray,” his 1988 movie that became a hit musical in 2002, is regularly performed in high schools across America.

“Nobody seems to notice it’s a show with two men singing a love song to each other that also encourages white teen girls to date black guys,” he says in his new book, Make Trouble. He calls “Hairspray” a “Trojan horse: it snuck into Middle America and never got caught.”

He’s won a cult following for his earlier gross-out midnight movies, including “Pink Flamingos” and “Female Trouble,” featuring his repertory of oddball amateurs led by drag queen Divine and kitschy cameos from unlikely celebrities such as heiress and kidnapping victim Patty Hearst.

Waters inched toward “respectability” with the relatively mainstream “Cry-Baby” (Johnny Depp), “Cecil B. Demented” (Melanie Griffith), and “Serial Mom,” with Kathleen Turner playing the title role. Yet even his comparatively big-budget productions retain his edgy and deceptively sentimental worldview.

The Baltimore-based Waters has written seven books, including the New York Times bestsellers Role Models (2010) and Carsick (2015), the latter a story of his cross-county hitchhiking trip. Make Trouble came out of his commencment address at the Rhode Island School of Design in May 2015. We spoke in March.

So, you’re called the Prince of Puke.

The People’s Pervert, that’s another good one.

That’s a recent one I’m really proud of.

You got suspended from high school. Kicked out of college for what you call the first marijuana scandal ever on a university campus. Then the Rhode Island School of Design (RISD) asks you to address their graduating class. Why?

That’s a good question. I don’t know…well, it’s an art school, I guess. I don’t know why. Because they thought I could be inspiring to their students, which I understand the irony of that statement, but, yes, I tried to rise to the occasion, which I think I did. I was excited to do it. I’m an optimistic person. I told the RISD class that good things could happen. I never thought the speech would catch on like this. I certainly never thought it would become a book.

Have you given other addresses, a commencement address like this?

I loved some of the things you said in the RISD speech. You talked about never fearing rejection. “Remember, a No is free,” you told the students. What did you mean by that?

It doesn’t cost anything. [Whether it’s] making a movie or anything else, you only need one person to say yes.

“Nobody likes a bore on a soapbox,” you write in Make Trouble. “Humor is always the best defense and weapon.”

Well, it’s true. I wrote that before Trump became president and I don’t agree with him at all, but it’s still true. Use humor as terrorism to embarrass your enemy. It would work with Trump because he’s got such thin skin. It’s time to make some trouble here.

You regularly sing the praises of books. In your 2006 spoken-word performance, "This Filthy World," you say libraries saved your life as a kid. Why are books so important?

For so many reasons. To learn how people think, and [to] see yourself in things. That’s the thing, I think: recognition, and to see there’s another world. To find out about things you didn’t know about, or you wouldn’t have in your own community. I had a friend, and her mother would say she was getting all of these bad ideas by reading. She was right! She was getting bad ideas based on what her mother thought. She was learning about worlds where her mother certainly wasn’t going to take her.

Let me ask you about one of your…I don’t know if infatuation is the right word, but Patty Hearst. Did you read Jeffrey Toobin’s book (American Heiress: The Wild Saga of the Kidnapping, Crimes and Trial of Patty Hearst)?

I did, but I really don’t want to comment because Patty doesn’t want to comment. You know what I mean? And the only thing I know is that she’s…well, when she heard they were going to make a TV movie based on the book, she called it “emotional rape.” I’ll leave it at that.

Do you have favorites among your movies?

The stock answer from directors is to say they’re all my children and I love them all. I usually pick one people might not have seen. I usually don’t pick “Hairspray” or “Pink Flamingos” because those are easy to get. My films are all still in print. You can get them. You can see them. They revive them all the time. Some are on TV, which I would have never imagined. They’re all the same to me. I guess I’d pick “Female Trouble” as my favorite Divine movie. I think “Serial Mom” is probably my best movie. But I understand “Pink Flamingos” and “Hairspray” will probably be the two mentioned in my obituary.

I’m doing a tour for this book, then I’m writing a book called Mr. Know-It-All for my regular publisher, FSG, which is detailed essays on how to escape respectability at 70 if you accidentally get it.

[Editor’s note: John Waters will be signing copies of Make Trouble on Apr. 14th at Atomic Books in Baltimore, and at Halcyon House in Washington, DC, on April 28th.]

Michael Causey is former president of Washington Independent Writers. He’s also co-host of the morning program "Get Up!" on WOWD 94.3 FM and takomaradio.org.