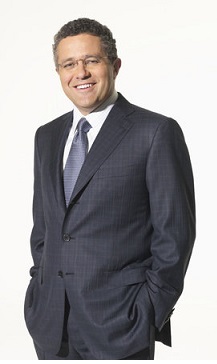 The Patty Hearst saga riveted America from the moment in February 1974 when she was kidnapped by a chaotic group of revolutionaries called the Symbionese Liberation Army (SLA) to her sentencing in September 1976. In some ways, she’s never left America’s collective pop-culture subconscious.

In his new book, American Heiress: The Wild Saga of the Kidnapping, Crimes and Trial of Patty Hearst, veteran journalist and legal analyst Jeffrey Toobin, no stranger to wild courtroom melodramas, has given us a deep portrait of a college student thrust into the national spotlight. Her kidnapping signaled a Brave New Media World, with 24/7 satellite TV coverage feeding a public with a seemingly bottomless appetite for a story about a rather average young woman with an interesting last name and huge inheritance.

Toobin, whose book on O.J. Simpson’s trial was the foundation for the recent FX series “The People v. O.J. Simpson: An American Crime Story,” is a powerful chronicler and more than a match for the bizarre Hearst saga. Victim or accomplice? Victim, then accomplice? “The heart of the story is whether Patricia behaved voluntarily,” he told me. “I think that's an enduring compelling mystery.” I spoke with the New Yorker staff writer and CNN senior legal analyst in July.

First, Patty Hearst was a kidnapping victim. A few months later, she emerges as “Tania,” a willing participant in violent crimes committed by her kidnappers. Was this a classic case of Stockholm syndrome?

I preferred not to use psychobabble and terms like that. My view is Patricia reacted rationally to her surroundings. She was in a restless place in her life when she was kidnapped. She was unhappily engaged, she was at sea, and she was surrounded by these scary but compelling characters who told the story of societal oppression, and also that her family and the police were out to get her as well as the SLA. She joined in and she became an active, voluntary participant in an extraordinary number of crimes. You know, not just the bank robbery for which she was convicted, but two other bank robberies, a wild shoot-out on the streets of Los Angeles, multiple bombings. She had multiple opportunities to escape and never did because she didn't want to. Once she was arrested, she thought rationally “that's no life for me, I'd like to go back to the old life,” and she did.

I know you don't want to get into psychobabble, but was she a weak character?

Well, she was an unformed 19-year-old. I was actually more impressed by her strength than her weakness. She was tough as hell. She became a true dangerous comrade to the SLA.

I forgot for a second she was only 19. In the book, you talked a bit about this being the only political kidnapping ever in the United States. Can you talk a little bit more about that? It’s a pretty incredible fact.

Well, you know, there has been political violence in American history since the founding of the country, but never a kidnapping where the ransom was a form of political change. There was no…I mean, it just never happened before and it never happened since, thank goodness. Other countries have it. The SLA did model it, though, on some of the terrorist groups that were active in the '70s, such as the Red Brigade in Italy. They engaged in political kidnapping, but it was a completely foreign concept in America. [Note: Among other demands, the SLA forced the Hearst family to organize a massive free-food giveaway in Oakland.]

After she was arrested, she became part of a trial that only fired up media coverage. Her high-powered attorney, F. Lee Bailey, doesn't come off particularly well in the book. That said, how big a role did money play in her defense? Did she get a rich girl's justice?

Well, I think you have to separate out two things. Yeah, she was represented by very high-priced lawyers at trial. But it didn't do her much good, mostly because she was actually guilty. I think the jury understood the facts. I think her wealth really played an enormous part in her becoming the only person in American history to receive a commutation from one president (Carter) and a pardon from another (Clinton). That's a really extraordinary thing. That is entirely because of her wealth.

You don't think she got a relatively light sentence?

Well, I think she got a pretty tough sentence, but she didn't serve it because it was commuted.

I don't want to make this too black and white, but were there any heroes in this story?

Well, I'll tell you, the person who I found quite appealing was Randy Hearst, her father. [He] was basically an easygoing businessman, didn't work very hard, lived a life of ease, but he loved his daughter. He worked like crazy to free her, and wound up learning about a side of the world he knew nothing about. I found him quite appealing.

He really grew as a person in the book, during this period.

After the trial, Patty became an odd figure, I’m not sure what word to use, appearing in John Waters' movies and the like.

I don't think she's odd at all. I think there's a side of her that liked to dwell on the dark side a little. The Waters movies were a very safe outlet for that attitude. You know, the SLA knew nothing about her when they kidnapped her, other than that she was a Hearst. They found someone who was uniquely susceptible to their appeal. That was just sort of dumb luck on their part. I think she led the life for which she was destined. She's a socialite with a few eccentric interests, but she's basically a rich woman in the suburbs. That's who she was, and that's what she was going to be before this happened, and that's what she wound up being.

How has Patty reacted to the book?

She declined to cooperate. She was not pleased I was writing it.

Can you talk about what you're working on next?

You know, I certainly can except I don't have a book in the works. I find writing these books very emotionally draining, and I am not ready to dive into another one right away. You know, I trust that I will.

Why is the experience draining? Do you identify with the character?

No. It's just…I don't know how to say this in a profound way. It's just a tremendous amount of work to research and write serious nonfiction. I have a system when I'm working on a book where I write five pages a day, and 1,250 words. I am fastidious about keeping up that pace. It's not an overwhelming amount for a day, but when you have to do it five days a week for months. It takes me about eight months to write a book. It's just a lot. Also, I am very conscious that people have lots of options besides reading my book, so it better be good, it better be interesting, it better not be boring. It's got to be accurate, and I've got to give people something they haven't heard before. All of that, I'm not asking for sympathy, but it's just, I think, intellectually and emotionally demanding. I mean, it's very good to have written them, and it's very good to be done.

[Editor's note: Jeffrey Toobin will read from and discuss American Heiress at 7 p.m. tonight at Politics and Prose in Washington, DC. Click here for details.]