Antoine Laurain was born in Paris and is a screenwriter, antiques collector and the author of four novels. His latest, The President’s Hat, was awarded the Prix Landerneau Découvertes and the Prix Relay in 2012. 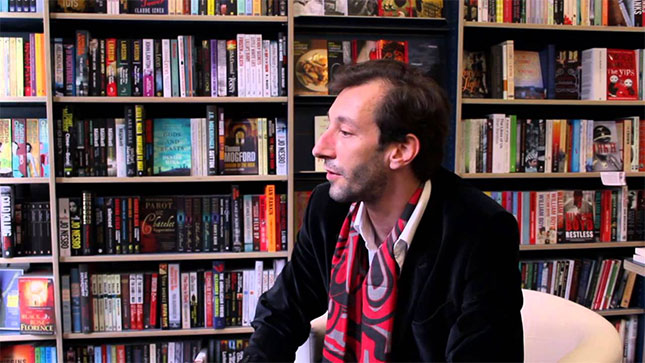 About The President’s Hat

The President’s Hat by Antoine Laurain is the author’s fourth novel, originally published in France as Le Chapeau de Mitterrand to critical acclaim and awarded the Prix Landerneau Découvertes and Prix Relay des Voyageurs 2013. It is being adapted for television and published this month in English.

The book, a novel-in-stories, is about the peregrinations of a hat that briefly passes from person to person, each time empowering them to change their lives. It’s a whimsical story set in the 1980s, with a few truths.

The Q&A with Antoine Laurain

“If you want to get ahead get a hat” was a popular advertising slogan in the 1940s when men still wore hats. The message was that in order to succeed in life, men needed a hat. Did you have the slogan in mind when you began writing the story?

Today people may not necessarily need a hat to succeed in life, but the slogan remains in our collective consciousness. In the book, the hat isn’t any ordinary hat but the French president’s. If you want to change your life, try the president’s hat! But today the best slogan may be the one from my readers: “I wish I had a president’s hat!”

Your book is a novel-in-stories in which President François Mitterrand appears at the beginning and the end as anchor to the plot. The stories transition smoothly in a cinematographic way, using a simple, effective paradigm — one character finds the hat, then leaves it, until the next one finds it. But you also include more subtle clues to insure that the story moves along. How does your background in screenwriting and directing influence how you write?

The main influence is the construction. You have to know were you are going, you have to know the little details that you will use four or five chapters later. It’s a very hard game. Screenplay is very different from literature, a concept I learned during my studies at the university. America is really the country of the screenwriters. I have learned so many things from Paul Schrader’s screenplays, and from Billy Wilder’s—I’m a great fan of his. Wilder is a master.

Your characters lead a quiet and unremarkable existence until they come upon the hat that the president lost. Like a painter modulating his brush strokes with dark and light color to bring realism to the scene, you describe them as glum and ordinary, yet capable of keeping a hat that doesn’t belong to them, and still unbeknown to them bravely fixing their lives. Life is like that, don’t you think?

Life is often very ordinary and sometimes boring. The president’s hat is a sort of mystical symbol about change and fortuity. Most of the significant changes in our lives have a very small beginning. For example, imagine a man who has missed his train, he is obliged to take the next one. In this one, he meets a woman, she becomes his wife and so on … imagine if he had caught the first train!

Do you think that fate and destiny might have played a lesser role, had you chosen more affluent and better-educated characters? Do you believe there is a link between socioeconomic status and the belief in these notions?

I think fate and destiny can play a role for everybody. You know, it’s the universal part of this story, that’s why people like it.

You write about disillusioned characters, who by happenstance find a hat and muster the courage to change their lives — like a fairy tale. And the simple prose and whimsical tone give the book an undeniable fable-like quality, a didactic tone that makes the reader pause. What is the moral of the fable?

It strikes me that at times you poke fun at French society, and modern society more generally. Should the reader understand your book on a deeper level as a commentary, even a social satire?

Maybe it’s a social satire for the last character, Bernard Lavallière, from the upper class, great bourgeoisie, who decides to go to a big socialist party with actors, publicists, etc. It’s a portrait of that society, which in France in the 1980s we used to call “gauche caviar.” That was pretty funny to write! [Editor’s note: “Caviar left” is equivalent to the American “limousine liberal”]

Looking at your literary work, your three other novels deal at the core with characters exploring their identity (Ailleurs si j’y suis), addiction (Fume et tue) and failure (Carrefour des nostalgies) — all serious themes treated, however, with wit and humor. Is this a conscious decision on your part to convey messages with double entendre?

Yes it is, definitely. All my novels are telling a story about identity and failure at a very specific moment in the character’s life. They have to find their real personality; in each story they have a purpose, which occurs by chance, and they have to avail themselves of the opportunity. It’s a difficult way! And to end, yes, it’s possible to tell serious things with some humor.

Patricia Bochi is a features editor with the Washington Independent Review of Books.

An Interview with Erika Johansen

The author of The Queen of the Tearling discusses inspiration, favorite writers, and the shortsightedness of the YA label.