An Interview with John Prados

The historian discusses Storm over Leyte, the allure of WWII books, and the challenges of deciphering primary sources. 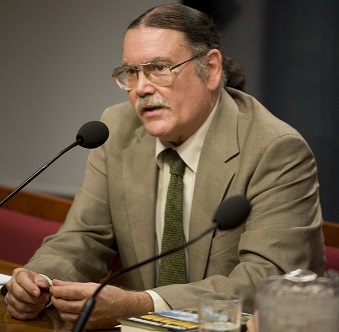 John Prados, an historian and national-security analyst based in Washington, DC, is the author of more than 20 books. His newest work, Storm Over Leyte: The Philippine Invasion and the Destruction of the Japanese Navy, which comes out today, tells the story of a little-known battle that had a big impact on World War II’s Pacific Theater.


The Battle of Leyte Gulf hardly has the name recognition of Midway, Iwo Jima, and others, yet it was incredibly significant in the Pacific Theater during World War II. Why do you think it hasn’t gotten the coverage — until now, with your book — that it merits?

It’s flattering to think of Storm Over Leyte as the beginning of coverage of this enormous naval battle, but it would be better to say that it is the best and most balanced account. This actually goes to your larger question of name recognition. Midway was the battle where the chips were down and Americans turned back a superior Japanese fleet. Iwo Jima has the famous flag-raising and the kamikazes. The Battle of Leyte Gulf shares the bravery of sailors and soldiers with those other epic events, but it was also the moment the Japanese Navy was actually destroyed, and it was a moment when the Japanese, in the midst of their destruction, could turn the tables on the Allies with their enormous technical, material, and intelligence superiority. Plus, Leyte became the moment when the Japanese invented the kamikaze tactics that so dominated the remainder of the war. For all those reasons, the battle merits all the attention we can give to it.

You were able to draw on a number of untapped primary sources — interrogation transcripts, declassified intelligence reports, etc. — while writing this book. Were you surprised at the wealth of unmined resources still out there given the myriad books written about WWII?

I’ve followed the evolving history of World War II for decades. A few years ago, I argued that the next great challenge for writers on these events was to go back and reframe our accounts of the battles and campaigns in the light of the intelligence story that we now are attaining good knowledge of. Storm Over Leyte is actually my third book that seeks to illustrate how this is now possible (the others being Normandy Crucible and Islands of Destiny). I am surprised at the apparent hesitance of historians to take up this challenge. The underutilization of source materials, I think, follows from that reluctance.

What are some of the challenges of working with unevaluated primary resources? Do you take journal entries at face value, for instance, or is there an element of “trust but verify” in play?

The use of evidence is clearly a central element of the historian’s craft. “Trust but verify” is one aspect of that. In the Leyte Gulf story, for example, there is one important primary source (the diary of senior Japanese admiral Ugaki Matome, the only one of its kind) that seemed skewed to me. Looking at other interviews and recollections which touch on parts of that story, the backgrounds of the individuals involved, as well as the external and verifiable events the diary sought to comment upon, it became clear the admiral was settling scores. Until now, that source has been used uncritically. I have chosen to show how the primary source actually distorts the story. I have applied the same kinds of analysis to many sources, from General Douglas MacArthur’s exchanges with President Franklin D. Roosevelt, to the question of intelligence inputs to the Leyte Gulf battle. Every piece of evidence needs to be weighed carefully.

Given the changing face of war, is the era of epic naval battles behind us? And if it is, what role, if any, should traditional navies play in the future?

I had this very conversation once with Roger Hilsman, who, at the time of the Leyte battle, was leading Kachin tribal guerrillas in Burma for the OSS. Hilsman was confident there will never be another great naval battle. I am not so sure, not only because of Santayana’s advice, but because by its nature, conflict is a shifting phenomenon. For example — and in the same region of the world — the People’s Republic of China is today claiming territorial control of waters in the South China Sea that are also asserted to belong to several other nations. The United States is disputing the Chinese claim. Plus, there are similar Chinese disputes with Japan. And the Chinese are building a blue-water navy. I won’t forecast that all or any of this leads to an epic naval battle, but I will say that you can see how it might. Belligerents may change, too — U.S. warships are entering the Black Sea to remind Russian fleets of the internationality of these waters. In the absence of epic naval battles, the role of fleets for intervention or coercion — as in gunboat diplomacy, armed retaliation, force projection, or conveying expeditionary armies — will remain.

In 2014, you wrote on your website: “But like the putative Allied dominance at Leyte Gulf, the situation in the Middle East today is not so clear cut as would seem. Like the Japanese seventy years ago, what ISIS has going for it is determination and the willingness to die…Those Americans at Leyte Gulf who took a complacent view of the Japanese were destined to be shocked. Do not be surprised if the same happens with ISIS today.” Has anything happened in the intervening two years to change your viewpoint? Is the U.S. looking at ISIS with complacency?

Good question. I actually think that observation from a couple of years back has come out spot-on. The ISIS/ISIL movement not only persisted, it has become an article of the current debate whether U.S. intelligence underestimated the movement and whether analysts, in fact, were ordered to file misleading reports, or their reports were edited to eliminate starker warnings, giving top government officials a complacent view of the threat. On the other part of the question, I would argue that American complacency with respect to ISIS is gone. That is not the same thing as to say that the United States actually has a solution to the problem — I believe the covert operations, remote bombing, and commando strikes carried out so far have had only limited impact. Which is also not to say that ISIS won’t collapse, at least in Syria. The greater danger today is that “ISIS” will devolve from a structured militant movement to a generalized action ideology, like “anarchy,” used to justify otherwise senseless violence.

[Editor’s note: John Prados will discuss Storm Over Leyte at the International Spy Museum in Washington, DC, on Sept. 19, 2016, at 6:30 p.m. Click here for details.]