An Interview with Amal Ghandour

The writer discusses Beirut, the Arab Spring, and the pitfalls of NGOs. 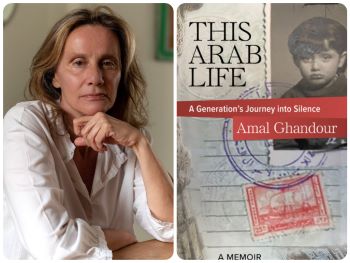 How often does one come across a book written from an entirely different perspective on a small country with a big place in the world? Lebanese Jordanian author Amal Ghandour’s This Arab Life: A Generation’s Journey into Silence is a revelation. It’s beautifully crafted with nuance and insight by a woman with an honest sensibility and an unerring eye. Ghandour’s journey takes us from Lebanon to Jordan to the U.S. and back to Beirut — from the peaceful comfort of Islam in everyday Jordanian life to the roiling upheaval of the Arab Spring.

You are now back living in Beirut. Is there anything you’d like the world to know about Lebanon?

This is an unbearably beautiful patch of the earth, magnificent and lush and alluring, that is dying because, in its people, it has had its worst enemies.

You are both a keen observer and a reluctant participant in this story. As you assume each role, what changes about telling the story?

They’re companions of a sort, certainly in me. What changes about telling the story is a subtle twist to these roles, a quest for a clearer voice about me. My observations turn inward. I bring myself into the conversation. In chapter two, I recount an interesting moment with my therapist, when she tells me that I am a woman without a voice, that I am very good at describing and analyzing my surroundings and the characters that populate them, but that I am very quiet about myself. That was revelatory to me, and the book is essentially my search for the voice.

You mention that the concept of defeat has special resonance in the Arab world, specifically regarding when the Fertile Crescent was forcibly divided by Britain and France. Do you think this division, so entrenched, might be the cause of the failure of so many “isms”? In other words, without a collective, maybe it’s impossible to jointly embrace an ideology?

Well, in our modern Arab history, the 1920 slicing and dicing of us was the first defeat, and perhaps the most consequential one. You raise a very interesting point about the limitations that forcible fragmentation and ill-studied state constructions can have on the viability of a collective identity. The tendency towards the mythical is invariably in all state and national formations, but in the Arab case, the stark contrast between what we were made to be and what we aspired to was truly jarring.

Once individual states were established and entrenched across the region, the elites’ vested interest in them clashed with the actual demands of unity — interests that were, of course, encouraged and fed by foreign powers. But that was just one component of a much larger betrayal of aspirations and ideals — the “isms” you mention.

The elites, foremost among them the actual authors of our grand ideologies and political parties, didn’t just betray their nationalist projects — Arab nationalism, Pan-Syrian nationalism, and the like — they proceeded to violate their commitments to the cornerstones of these projects: democracy, citizenship, secularism, social justice. The best example is, of course, the Baath Party that joined hands with the militaries of Syria and Iraq in the 1950s and became the state’s ideology when both militaries took over in the ‘60s.

The Islamists seem to have won the grassroots territory, the “cultural small world,” with better battle tactics — togetherness and a single ideology. Do you agree?

Islamism’s surge and strong grassroots presence is undeniable, but I don’t think it has necessarily won “the cultural small world.” To say that it won implies that there was a battle with victors and vanquished. And there wasn’t. In much of the Arab world, the patriarchal state had no qualms ceding all the cultural and social ground to Islamists. These two conservative actors were more or less aligned on most cultural and social issues, especially when it came to women. And when they weren’t, the state didn’t mind bargaining.

Islamists, in this sense, were more partners than adversaries. And politically, Islamists were a very bankable “enemy.” They were the perfect ghoul. It made it very easy for Arab regimes to sell the us-or-them binary. Settle for us, they warned, because the alternative is infinitely worse. They’re still doing it in states that pretend to be secular.

Where political Islam assumed power, like [in] Sudan, Iran, and Gaza, it was just the law of the land, not an open arena of competing forces and ideas. But, yes, the Muslim Brotherhood, for example, did dominate the ecosystems of NGOs [non-governmental organizations] in many pseudo-secular Arab regimes. They had the state’s nod, the financial resources, the ideological zeal, the organization, and the sophisticated social services that catered to people’s needs, from charity all the way to social support, education, and medical care. And yet, for all that, the 2011 uprisings have shown that our societies, once allowed to express themselves more freely, reveal remarkable diversity and openness to ideas. Post-Islamist trends have been notable in many countries, in fact.

Regarding NGOs, you use the labels “heroic game changers” vs. “hard-nosed opportunists.” Can these be the only choices? You don’t seem to think very well of these do-gooder organizations.

I use these labels in the course of offering a layered perspective on Arab civil society. I wanted to render a more complete picture than typically depicted by critics and admirers. Harsher critics attack civil society as if it’s a well-oiled, disciplined ecosystem in the service of hostile Western interests, when in reality, it’s sprawling, messy, unruly, and includes every type and size of NGO. The eruption of NGOs, beginning with the 1980s, is closely associated with the dawn of the neoliberal era. And the reasons are clear: There was a concerted effort to reduce activism [against] this supposedly harmless sphere at a time when states were embarking on very austere economic programs that were sure to inflict serious hardship.

By this time, in many Arab countries, organized politics — political parties, trade unions, professional associations, the press — had already been neutralized. So, when talking about Arab civil society, we often find ourselves meaning “NGOism,” a more accurate term than civil society. Under repressive regimes, it’s the only type of “activism” that was tolerated, and many of us engaged. We were and are “hardnosed opportunists,” in this sense. I don’t know of any serious civic actor, in any field, who believes [NGOs] are genuine gamechangers.

Which brings me to [the] ardent cheerleaders here and in the West who still trumpet the silly notion that this Arab “civil society” can deliver meaningful, systemic change. It cannot. It’s a very rich topic that deserves more serious attention.

You write: “We continued to celebrate the clashing narratives as a quintessential Lebanese marvel. We spun grand theater from a shit show.” Describe this crowd that you refer to as “we.” For some odd reason, I picture different generations and genders dancing down the streets behind the pied pipers. I’d like to be wrong.

You’re not wrong, alas. Very few of us Lebanese excused ourselves from the hysteria of gluttony, even those who knew better. It’s truly tragic how the aftermath of the 1975-1990 civil war very quickly turned into a sinister continuation of it by other means. But we are not all equal in this breathtaking abandonment of sobriety. The ruling class’ role in cobbling together postwar Lebanon is a case study in excess, recklessness, greed, and utter disrespect for people and land.

When you describe your early years in Beirut, grandparents nearby, beer, and bizr (pumpkin seeds), I’m reminded of Mayberry RFD, Lebanese-style. It makes me think people aren’t that different after all. What about you?

How many of us teared up in “Cinema Paradiso” for this same reason? Nostalgia has this wonderful way of illuminating everything beautiful about the past and then convincing us that it was all, in fact, that beautiful.

Living again in Beirut, are you finally home?

Yes and no. I am very much at home in my bubble. That’s hardly Beirut, though — just a tiny, tiny island within it. But Lebanon is itself a constellation of bubbles, decipherable in its parts and incomprehensible as a whole. I don’t think I will leave Lebanon anytime soon, unless we descend into another civil war, and I don’t see that happening. But beyond the near future, I don’t imagine myself sticking with it, either, because it’s a place with little prospects and hope. It deeply saddens me to say this, but there you have it.

What are your hopes for the region?

I am always searching in vain for the light. It’s hard to weave a happy story from the Iraqi and Syrian mess. Lebanon inspires the same trepidations. Jordan’s economic woes and exhaustion are not reassuring, and I have a keen sense of dire tidings about Israel and Palestine. A new order is in the making in practically every corner of the Arab world. We need to have humility when forecasting the future, and we need to appreciate that when its rhythms finally settle and become discernable, they will be diverse, uneven, and always interesting.

Q & A with Debby Applegate

Debby Applegate won the 2007 Pulitzer Prize for Biography for The Most Famous Man in America: The Biography of Henry Ward Beecher (Doubleday). She’s at work now on Madam: The Notorious Life and Times of Polly Adler, forthcoming from Knopf. Charles Shields spoke with her about making history and biography vivid.

Q&A With Thomas B. Allen

Thomas B. Allen discusses the sweeping, dramatic history of the Americans who chose to side with the British in the Revolution