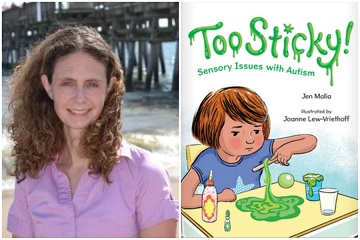 I first met Jen Malia at the Writer’s Center on a panel about autism through a literary lens, and I’ve long admired her writing. Her essays and articles are well known, appearing in the New York Times, the Washington Post, Catapult, Glamour, NPR, and more. Recently, she published Too Sticky! Sensory Issues with Autism, a picture book that tells the story of a young autistic girl as she navigates some common challenges in her world. It’s not an easy time to be launching a new book, but young readers need a main character like Holly now more than ever.

Congratulations on Too Sticky! My whole family loves this book! What made you decide to write a children’s book?

My writing career changed direction when I was diagnosed with autism spectrum disorder as an adult. The first autism-related essay I wrote, “I Was Diagnosed with Autism in My Late 30s,” for Woman’s Day, was syndicated by Cosmopolitan, Good Housekeeping (U.S. and U.K.), Country Living, Dr. Oz the Good Life, and Yahoo. I knew then that writing about my experiences living with autism would become a new focus for me. Shortly after my success with this essay, I met Joanne Lew-Vriethoff, an illustrator, who introduced me to editors at Albert Whitman. They read other essays I had written that focused on my experiences raising autistic kids, including “What a Muppet with Autism Means to My Family,” for the New York Times. They asked if I would be willing to write a children’s picture book with an autistic girl as the main character, which became Too Sticky! Sensory Issues with Autism. Joanne ended up illustrating the book.

How did your children respond the first time they read it?

Five months before publication, I got the F&G (folded and gathered) copy of Too Sticky!, [which is] an advance review copy for a children’s picture book. That night, my kids sat in a circle with their kid-sized armchairs, and we read the book as a family. I named three of the characters in Too Sticky! after my kids. They giggled every time they heard their names and saw the illustrations of the characters based on them.

Walk us through the writing process for this book.

I had no experience with writing for children when Albert Whitman asked me if I would be interested in potentially writing a book for them. At first, all I knew is that the main character would be an autistic girl. I wanted Too Sticky! to be not so much a book about autism as a book about a girl who happened to be autistic going about her everyday life.

I decided the day would start at home to show her interactions with her family and then move to the school environment to show how she communicated with her teacher and classmates. I wanted the story to focus on her sensory issues and her anxiety about participating in a slime experiment at school. As a STEAM children’s book, I also wanted Too Sticky! to educate kids about the science of slime.

Figuring out what Too Sticky! would be about was the easy part. Learning how to actually write a story for kids that works was the hard part. I wrote a quick draft within a matter of days and sent it off to children’s book writers I had met in some online kid-lit groups. I learned the language was not as kid-friendly as I had thought. Then, I realized what I needed to make this story work was right in front of me: my kids.

I paid more attention to my target audience — preschool and early-elementary-aged children — who just happened to be living in my own home. I listened to my kids’ voices and how they communicated with each other. I read the manuscript to them and made more revisions before sending it off to editors at Albert Whitman. They liked the initial draft of Too Sticky! but had a lot of editorial notes for me. I went through about three major rounds of revision with Andrea Hall, who became my editor, before I was offered a book contract.

Will you write more children’s books?

While Too Sticky! was under contract and going through more rounds of revision and copyediting, I drafted two more children’s picture book manuscripts. I also have a middle-grade novel in progress. So far, all of my main characters are autistic, and some of my supporting characters are neurodivergent, as well.

What children’s authors do you love to read to your children?

My 8-year-old daughter reads a lot of graphic novels on her own. Her favorite author is Raina Telgemeier. My 6-year-old daughter loves reading Elephant & Piggie books. My 5-year-old son loves Pete the Cat books. We have a lot of family reading challenges where my kids get a sticker for each day they read and earn prizes when they collect enough stickers. Since my son hasn’t started reading on his own yet, he gets stickers when his dad, sisters, or I read to him.

Why is it important for autistic writers to write books about autism?

As an #ownvoices autistic author, I love writing for both kids and adults. I wrote Too Sticky! so my kids could see themselves in a book. My main character, Holly, is an autistic girl based on my own and my younger daughter’s experiences living with autism and sensory issues. I’ve had a lot of readers reach out to me about my essays, saying they were able to understand more about themselves and/or their kids from reading about my firsthand experiences. Most recently, I had a big response from my New York Times essay “My Daughter and I Were Diagnosed with Autism on the Same Day.” I’m currently writing a nonfiction parenting book proposal.

As a reader, I have always identified more with the characters in #ownvoices autistic books because I could see myself and my kids in them. For children’s picture books, I really enjoyed Sally J. Pla’s Benji, the Bad Day, and Me, illustrated by Ken Min. I’m also looking forward to Steve Asbell’s [forthcoming] Flap Your Hands. Some of my favorite middle-grade novels by #ownvoices autistic authors include Nicole Panteleakos’ Planet Earth Is Blue, Sally J. Pla’s The Someday Birds, and Sarah Kapit’s Get a Grip, Vivy Cohen!

How has the pandemic impacted your plans for promoting Too Sticky!?

I had a chance to sign [advance review copies] of Too Sticky! in January at the American Library Association Midwinter Conference. I didn’t know then that that would be my only in-person signing. My book birthday for Too Sticky! was on April 1st, when I was under stay-at-home orders in Virginia. I celebrated the book launch at home with my family. We made a green cake and sang “Happy Birthday.” Luckily, I had already set up a lot of opportunities for online book promotion before the pandemic.

Writing essays for adults about my personal experiences as an autistic mother of autistic children has been the best book promotion for Too Sticky! Two of my essays were reprinted in the New York Times’ “Understanding Autism” special-edition magazine, which happened to go on newsstands a few days before Too Sticky! was published. Parents magazine also selected my family to feature in their “Parenting Against All Odds” video series, which should be out soon.