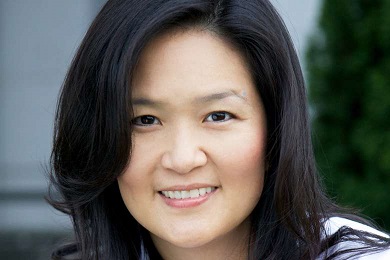 Janice Y.K. Lee’s The Expatriates tells the story of three American women living in Hong Kong: Mercy, a young Korean-American; Hilary, a wealthy housewife; and Margaret, a wife and mother. All three grapple with their own unique abyss complicated by displacement in a foreign land. Ultimately, though, they end up touching one another’s lives in ways that only women can.

The characters in The Expatriates are somewhat disconnected from their environment. Could the entire story have taken place anywhere? Stuttgart or Paris? Would Margaret, Mercy, and Hilary have a different interaction in another venue?

I think there are many universals in the expatriate experience and certainly in the realms of women and motherhood. The women in The Expatriates are disassociated from their familiar world and have been thrust into a foreign universe. I think that this story could have taken place in many other cities, certainly. And I think that their interactions would have been similar wherever that might have been. Expatriates have a way of finding each other.

Margaret and Hilary leave the U.S. and yet move into an America abroad: Margaret sends her children to the American school, and they join the right club almost as if in avoidance of the entire culture in Hong Kong. Is it them or the nature of living in Hong Kong?

There is great danger in generalization! However, I think you will find many expatriates that look and sound like Margaret and Hilary wherever you go. I think that it is frightening for many people to move to a country where they do not know the geography, the language, the culture, and so it is easy to gravitate towards the known. There are, however, many expats who are by nature more adventurous and wholeheartedly embrace getting to know the culture of the country where they are. There are all types, and it depends on who you focus your eye on. I would not say it's the nature of Hong Kong. I would say it is the nature of these particular women.

The three women don’t know each other very well, yet each of their stories touches the other. In writing their stories, was it harder or easier to have each story only tangentially related?

I wrote to discover how they related to each other. When I start a book, I don't know what it's about, only the people in it. And as I write, I uncover their stories. So it is a bit of a mess in the beginning as they (and I) are figuring it all out. So I don't know if it was harder or easier. I feel like it was all quite difficult.

Sometimes the biggest misunderstandings seem rather small. How much do the people around us change what’s in us?

I think some people change to accommodate others, and others need to be accommodated. I suppose a happy marriage is one in which these things are in harmony. I think people change a lot over time if they've been with someone for a while. But meeting someone later in life, I don't think you change that much.

Mercy, Margaret, and Hilary all seem to be hiding from the person who is supposed to be closest to them. Is telling the truth really a preposterous notion for most?

Not at all. There just isn't much occasion for such truth-telling. Some truths are awkward and difficult, and some are soul-destroying. They will all find out in their own time.

Margaret says of a woman she doesn’t know well that “she seems like a wide, shallow plate, holding nothing except the reflection of others.” (This is a wonderful description.) Is this a quality of many women, especially ones we don’t know well, or do you see it as a more particular quality?

I think it's a quality that's easy to ascribe, as you say, to the people we don't know very well. I've found that most people harbor a lot of secrets, interesting fears, personality quirks. It is very rare to find someone with whom you cannot have some sort of interesting conversation. You just have to dig a little harder. I think, in many ways, it speaks more about the observer than the observed.

Margaret comes to the conclusion that no one is thinking about anyone but themselves, or maybe their mothers. If true, do we get an excuse to assuage our own embarrassment by pretending that no one really bothers to notice the worst things about us, or does it provide a sort of freedom to do whatever we want?

I really believe this! I think most people are really, really thinking mostly about themselves and spend very little time thinking about other people. They might give them five minutes of their headspace if they've heard something terrible or terribly interesting, but they'll move on and think about other things that have more to do with their lives. It's not to say that everyone is so self-absorbed, but it is natural to be most interested in that which affects you directly. I like this belief, and I do indeed find it quite freeing!

[Editor's note: Click here to read the Independent's review of The Expatriates. Photo by Xue Tan.]

A Q&A with the author of Startup Rising: The Entrepreneurial Revolution Remaking the Middle East

Sarah Vogelsong's Q&A with the author of Birds of Paradise