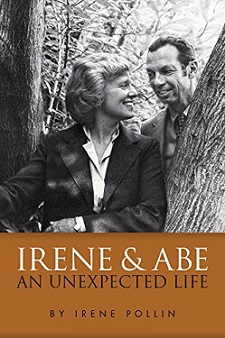 If you’ve lived in the Washington, DC, area for a while, you probably think you know who Irene Pollin is: half of the team, with her late husband, Abe, who built the Capital Centre in Landover, Maryland, and the Verizon Center in DC, and brought three pro sports teams to town.

People in other parts of the world are more likely to know her as the founder of Sister to Sister, the first organization dedicated to women’s heart-disease prevention and education, or as a psychotherapist who pioneered therapy for people with chronic illnesses.

Her new memoir, Irene & Abe: An Unexpected Life, is about all those things, and about the deaths of two of her children, a double tragedy that set her on several of the courses her remarkable life has taken. Her son Jay Jay and her daughter, Linda, both suffered from congenital heart defects. Jay Jay died when he was a toddler. Linda lived with heart problems until she, too, died at the age of 16, soon after her little brother.

That same year, Irene’s sister was diagnosed with severe mental illness, and Irene struggled with depression. She went to therapists who tried to analyze her, sifting through her early life to discover what was wrong rather than addressing the acute pain of so much loss. Although professionals now draw a distinction between clinical (ongoing) depression and situational (short-term; often brought on by traumatic events) depression, they didn’t then.

She went back to college in her early 40s, eventually earning a master’s degree in social work. She recalls that while she was researching her thesis topic, she went to the National Library of Medicine to see how much information there was about adolescents facing death.

“There were exactly two books,” she writes, “And both were terrible.” Soon, Irene was setting up models for counseling people with long-term illnesses, publishing articles in scholarly journals, and forming the basis for her first two books.

Meanwhile, she and her husband built the Capital Centre and acquired the Baltimore Bullets (now the Washington Wizards) and the hockey team that became the Washington Capitals. They planned and executed it all together, going over plans and bidding for the teams. The Capital Centre provided the Washington area something it had not had before 1973: an entertainment venue that could hold nearly 20,000 people. It hosted performers from the Who to the Harlem Globetrotters.

Irene was spending her days in a career that was demanding and emotionally intense, and her evenings at the Cap Centre. She writes about one day when, in her job as a therapist, she listened for several hours to a distraught young woman who had just received a diagnosis of multiple sclerosis. That evening, she and Abe hosted President Jimmy Carter at a basketball game.

Did she have a lot of days like that? Yes, she says, “But when you’re a health professional, you play that role. And at the end of the day, you walk out the door.”

She didn’t set out to write Irene & Abe. Her son Robert encouraged her to do it, and she says she learned a lot from looking back at her own life as an experienced therapist.

“I’ve dealt a lot with people dealing with chronic illness. I really know the behavior and all the reasons behind it,” she says, noting that it is very common for marriages to collapse when a child dies. “The reason usually is the couple looks to each other for support, but each one is devastated, and they don’t have the energy to give.”

She and Abe separated for a while, and the passage is written so that it comes as a shock to the reader, as it did to Irene. There are many surprising turns in this candid memoir, and they give an extra dollop of meaning to the title.

What’s next for 92-year-old Irene Pollin? Another book? She says it isn’t likely, but “I do miss being really challenged. I love being challenged. I’m still on the lookout for something creative. There are some interesting possibilities.”

An Interview with Rhoda Trooboff