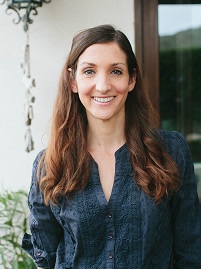 Kim Hooper’s novels don’t deal in easy topics. Her debut, People Who Knew Me, told the story of a woman who escapes New York City in the aftermath of 9/11 and assumes a new identity in California, leaving behind her husband, her mother, and the man she was having an affair with (who was inside the World Trade Center at the time of the attacks).

Her latest novel, Cherry Blossoms, revolves around Jonathan, a brokenhearted man who is planning a trip to Japan, after which he will commit suicide. Jonathan’s shocking decision is understood through a series of flashbacks, which reveal an unexpected backstory.

How different was the writing process between Cherry Blossoms and People Who Knew Me?

Though they are completely different books, the writing process itself was relatively similar. I started Cherry Blossoms before People Who Knew Me, actually. I traveled to Japan in 2009 and took Japanese language classes, and those experiences morphed into the story that became Cherry Blossoms. The book opens with the main character, Jonathan, declaring his intention to die. I wasn't sure if he would go through with it or not, so I set aside the book for years.

In that time, I wrote and published People Who Knew Me. When I came back to Cherry Blossoms in 2017, I knew how I wanted it to end. With both books, there was research involved, and I spent quite a bit of time arranging the puzzle pieces of both stories. I love playing with time, going back and forth between past and present to unravel a mystery, and both books have that element.

Cherry Blossoms deals with the often taboo subject of suicide. Why did you choose this particular topic?

I don't think I made a conscious choice to tackle it as a topic. The character in my head happened to be a guy who was at the end of his proverbial rope. I've experienced episodes of depression since I was a teenager, but I never felt the desire to end my life. I wanted to know what it was like to cross that line, and this character was my way of exploring that. It is a heavy subject matter that is part of the story, but I don't think this is a book about suicide. This is a book about a guy who is struggling.

As we read on, we discover that there’s more to Jonathan’s story than we thought. How challenging was it to keep readers a little in the dark?

This is always the most challenging part of writing a book. As the author, I know where the story is going (well, usually), and I have to try to put myself in the shoes of readers who are discovering as they go. Jonathan is a very guarded person, so I thought it made sense that the secrets he harbors come out slowly. Like I said, it's a puzzle. Once I know the plot points, I have to decide which revelations happen when.

Was Jonathan a difficult  character to write?

He was one of my most fun characters to write. He is extremely sarcastic, sometimes a jerk. Whenever I write female characters, people tend to think I'm writing about myself, so writing a man felt liberating. He is annoying at times, but I love him overall. He's just a guy figuring out his life.

The title Cherry Blossoms seems pretty straightforward since Jonathan is going to Japan to see them. But it also seems to indicate something more.

Yes. The cherry blossoms bloom for such a short time. When I visited Japan, I missed the bloom by a week or two, I think. So much of my personal struggle in life is accepting that nothing is permanent — happy times, sad times, they are all temporary. Jonathan is wrestling with this as well, and I thought the cherry blossoms were a symbol of the beauty in this struggle.

What message would you like readers to take away from Jonathan’s story?

Ultimately, I just want people to enjoy [it]. I want them to relate to the characters on some level and feel invested in what happens to them. As a reader, that's what I hope for when I pick up a book. As for any deeper message I want readers to receive, I would say I hope this book sheds a little light on depression and helps people who suffer with it feel less alone. There is so much stigma around depression and anxiety still. Not only do people have depression, which is hard enough, but then they feel ashamed about having it, which compounds the problem. I'm always drawn to "flawed" (not my word, but what I hear a lot) characters because I really think we're all dealing with something, and that's perfectly okay.

Tell me about your future projects.

I finished my third book, Tiny, and it will be published on June 11th. It involves a woman going to live in a tiny house after a family tragedy. I've been wanting to put a character in a tiny house for years. I'm not working on a novel right now. I have a 1-year-old and a full-time job, so I'm guessing there will be a couple years before a fourth novel.

A conversation with the author of "The Transformation of Batholomew Fortuno," an enchanting love story set in P. T. Barnum's American Museum in 1865 New York City.