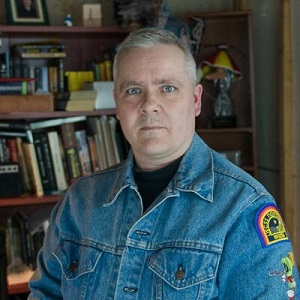 World Fantasy Award-winning author Forrest Aguirre’s second novel, Heraclix and Pomp: A Novel of the Fabricated and the Fey, is a cross-genre romp. It is part historical, part horror, and part road-buddy novel. The eponymous characters travel from Vienna to Prague to Istanbul, as well as to Hell and the faerie realm. The moods it evokes range from graphic, almost Boschian horror, to Lewis Carroll-style surrealistic whimsy.

There has been a resurgence of fictional golems. I’m thinking of Helene Wecker’s The Golem & the Djinni and Marge Piercy He, She & It, among others. What was the appeal of writing about a golem?

The publication of Heraclix and Pomp couldn’t have come at a better time. There are a plethora of novels involving golems that seemed to come on the scene more or less at the same time. Truth be told, the initial idea for the pairing of a golem and a fairy came back in 2000 or 2001. It arose from a conversation with a friend after a long session of Dungeons and Dragons in which we speculated on “unlikely pairings” of adventurers that could prove interesting.

The flesh golem, a magical construct made of pieces of the dead, seemed like the perfect foil to a fairy. But the real appeal of the golem that eventually came to be Heraclix had more to do with issues of memory, identity, and agency than with any kind of game mechanics. Yes, Heraclix was “created,” but he was created from already-existent materials: pieces of men who had once lived lives, men who were distinct individuals, men who had memories, men who had stories.

What mythological traditions did you draw upon to create the fairy realm?

None, explicitly. I’ve been enmeshed in magic since I was a young child, so I just naturally felt “at home” in Pomp’s native realm. I lived in England for a few years when I was a teenager. I suppose the rich English tradition of fairy lore might have informed the realization of that realm in Heraclix and Pomp, but I didn’t do any intentional research in this regard. This fairy realm is located somewhere in the grooves of my brain!

The novel, set during the last days of the Holy Roman Empire, is well-researched, both as an historical novel and as a fantasy novel. What sources did you use? The magical system seems to draw from alchemical and esoteric literature — could you speak to this in particular?

I am a historian by training. I received an MA in African history from the University of Wisconsin-Madison. And though I don’t use the degree itself in my “day job,” I call on those research and analytical skills quite often. As an undergraduate, I did a little stint in Renaissance and Early Modern European history.

Another source that was extremely helpful for setting the stage was Anderson’s popular Europe in the Eighteenth Century, 1713-1783. When I had questions about military life in the HRE, I consulted Duffy’s The Army of Frederick the Great. My descriptions of the military dress of the various armies was taken from the magnificent Osprey Men-At-Arms series.

I’d argue that there isn’t a magic “system,” per se, not like some fantasy books, anyway. There’s no real codification, and I wanted to keep it that way. I hark back to the early pulp sword-and-sorcery writers, Howard, Leiber, et al, who had an unwritten rule that the only people who would practice magic were the insane and the desperate. Because practicing magic means tugging at the veils of reality and trying to take a peek into the beyond.

The novel is also a travelogue, with set pieces in Vienna, Prague, and Istanbul. Have you been to any of these places?

I was born in Germany and traveled a lot as a kid, being the son of a U.S. Air Force sergeant. But I’ve never been to Vienna, Prague, or Istanbul. I researched each city heavily in books, online, and [by] calling upon friends who had lived in each of those cities (including my wife, who lived near Vienna for a time). I suppose I have a particular sensitivity to “place,” since I lived in so many.

As I said, I was born in Germany and lived in the Philippines, Italy, and England, where I graduated high school. My parents were good about leveraging our time overseas and we visited a lot of places, especially in Europe. Unfortunately, Prague was shut off to us at the time. Dad had no desire to go see Istanbul, and we just didn’t make it to Vienna. So I had to make the voyage myself, in my mind. My body is hoping to catch up in the next few years. We’ll see if they live up to my fictional expectations.

What inspired me about these cities is what inspires me about all of Europe. Here you have this tiny little continent seething with history. I love being American, but we don’t have anything like that here. I remember when I lived in England as a teenager. My friends and I would break into this supposedly haunted priory that was originally built in the 11th century. That’s 900 years old! Nine-hundred years!

And we would sneak in through a back window and wander the halls of this haunted building, scaring the bejeezus out of each other. We discovered that you could remove wall panels and travel through the walls, there was an underground hewn-stone wine cellar that was literally older than the dirt around it, and we were shown (I can’t tell who showed us, someone would get in trouble) a trap door that went into an underground tunnel that went for nearly two miles to an abandoned church where Satanists used to do their ritual goat-killing thing. Seriously, you can’t make this stuff up!

When you peek into the nooks and crannies of Europe, you develop a sense of “deep time,” the understanding that your life is a tiny, tiny blip on the radar of civilization, let alone the universe. It’s humbling and causes you to reflect on your place in the cosmos if you think about it too long. I have thought about it too long, and I think this shows in Heraclix and Pomp.

The novel is an exercise in mood whiplash — by turns horrific, whimsical, and, in a few instances, romantic (in an 18th-century way). The tonal shifts are effective and give the book a unique flavor. Were there drafts of the story that were weighed one way or the other?

I didn’t go into the book and look for places to insert humor or a sense of dread, if that’s what you’re asking. I find that the best books evoke many different emotions. For my part, I tend to feel pretty deeply, but I also have a morbid sense of humor. I’m a romantic, at heart, and I don’t mean that in a lovey-dovey way, I mean it in the Wagnerian sense. I love to be awed by grandeur, by love, and sometimes even by horror.

So I like works of fiction that can draw those feelings out of me while remaining “honest.” There’s nothing worse than forced humor — except, maybe, forced tears. I like to think that I’m emotionally honest with myself, and perhaps that shows in my writing. Getting inside Heraclix and Pomp’s heads (of course, they are a part of me — how could I help it?) allowed me some emotional freedom to see, for instance, what might strike Heraclix as funny, even in the midst of troubling circumstances. Von Graeb is the good-natured person I wish I could be, but I have too much of a gothic streak in me to be like him at all times.

Still, I enjoy his airy sense of humor, his lightness of being. I hope that the moods you experienced while reading the book were a result of the character’s different voices and their unique ways of seeing the world. I am awfully fond of the characters in this book, even the bad guys!

Speaking of Satanists, your vision of Hell is rather un-Dante-like; it’s full of bureaucracy. What is the inspiration behind this particular interpretation?

Isn't bureaucracy hell on Earth? When's the last time you had to stand in line at the DMV? The Hell portrayed in Heraclix and Pomp is an ugly mirror of early-modern Central Europe, really. It seemed appropriate that those who were being eternally punished for their sins should be reminded of what life was like, a constant reminder of what it is they lost by sinning. I was probably also channeling Kafka, who was the master of bureaucracy-as-Hell. I may or may not have read The Trial before I wrote Heraclix and Pomp.

I am working on a novel set in Holland during the mid-1600s. The Simulacra, as I've temporarily entitled it, is about a magically created simulacrum sent to kill the artist who shares his appearance and name. Things go awry. The creator is not what he seems. Nor is the artist/target of the murder. There is a journey to far-off lands and the emergence of a messianic cult. And there is a touch of Lovecraftian horror hiding in the shadows. An aquarium full of prophetic Koi feature prominently, as well.

Craig Laurance Gidney writes both contemporary, young adult and genre fiction. Gidney’s first collection, Sea, Swallow Me and Other Stories, was a finalist for the 2009 Lambda Literary Award in the Science Fiction/Fantasy and Horror category. Bereft, a YA novel, appeared in 2013; Skin Deep Magic is his third book. Gidney lives and writes in his native Washington, DC.