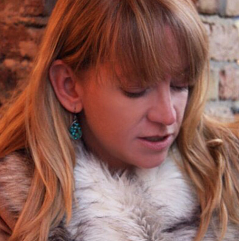 Despite its title, there’s nothing mathematical about Standard Deviation, Katherine Heiny’s debut novel. Instead, the plot centers on the jumbled and rather turbulent life of Graham Cavanaugh and his overly extroverted wife, Audra.

Theirs is no ordinary marriage, if such a thing exists. Graham divorced his first wife, Elspeth, to marry Audra, with whom he was having an affair, and he and Audra now have an autistic 10-year-old son, Matthew, who develops a curious fixation on origami.

Heiny’s ability to take on serious topics from a darkly comical angle is what gives Standard Deviation its edge. Here, she discusses her approach to the book.

What writers have inspired your own work?

Anne Tyler, Stephen King, Nick Hornby are my heroes. I’ve read their novels over and over and always find something new to admire. Alice Munro is a genius, obviously. Kate Atkinson, Lionel Shriver, Daphne du Maurier — all so talented. My favorite novel of all time is Gone with the Wind — my oldest child’s middle name is Mitchell in honor of Margaret Mitchell.

Your first book, Single, Carefree, Mellow: Stories, deals with relationships and their imperfections, and so does Standard Deviation. Why is that topic so appealing?

I think relationships — whether it’s with romantic partners or children or parents or friends — are the hardest things we do as people, so they’re always interesting to write about. I’m not sure a perfect relationship exists. And even if it does, I think it would be awfully boring to read about.

How did a term used in statistics become the title of the book?

For a long time, the novel didn’t have a name — I just called it “the Graham and Audra book” while I was writing it. When it came down to choosing a title, I ran about a million possibilities by friends and family, and “Standard Deviation” was the one everyone liked. But I thought it represented Graham’s love of order and how far his life has deviated from that, so it worked on a lot of levels. Plus, my father is a statistician, and the title made him really happy.

Infidelity is one of the issues explored in the book, although you give it a more humorous tone than a dark, brooding one. Was that challenging?

I didn’t want the infidelity theme to totally take over the book, so I made it something that happens off stage and gave it some humorous components. And I think Audra’s glibness about it is maybe the most upsetting part to Graham. If she treated it more seriously, he might have felt better, but then I feared the book would lurch off in a direction I didn’t want it to.

Would you say the writing process was different between Standard Deviation and your first book?

I’d never written a novel before, only short stories. I truly felt a novel was something I couldn’t write, and it was a wonderful surprise to discover that I could. But, basically, it’s the same process no matter what I’m writing: me sitting at my desk stringing words together. Some days, I find a rhythm early on and write a lot, some days I don’t, and I’d probably be better off cleaning out the refrigerator. But it’s all about showing up and at least trying.

Audra's fixation on Graham's ex-wife, Elspeth, is atypical. Why does she even want Elspeth in their lives?

I’m not sure Audra thinks about whether she wants Elspeth in her life — she just spontaneously befriends her, the way she does everyone. Audra is an impulsive person; she doesn’t think anything out ahead of time. I think she’s mainly curious about who her husband was married to.

Graham and Audra are so different. Do their differences hurt or lift up their marriage?

Maybe both? I think Audra inspires Graham, and certainly he envies her relationship with Matthew, but he also finds her exhausting. There was a line in an earlier draft of the novel where he thinks her sociable nature is like X-ray vision: both a blessing and a curse.

I’m writing a new novel, but I just took a quick break to write a story about some high-school students playing strip poker. I love to write about teenagers, which is probably a sign of my emotional immaturity.