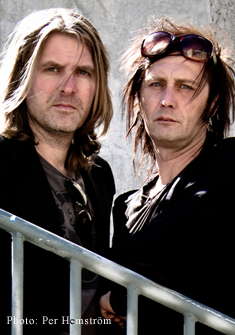 Erik Axl Sund is actually two people, Jerker Eriksson and Håkan Axlander Sundquist. The Crow Girl, published in Sweden in 2010, is the first book in the Victoria Bergman trilogy. All three books have been bestsellers in Europe, and the trilogy received a special award from the Swedish Academy of Crime Writers in 2012 for being “hypnotically captivating psychoanalysis in crime fiction form.” The Crow Girl was published in the United States last month.

Håkan has worked as a sound engineer, musician, and artist, and Jerker as the producer of Håkan’s electro punk band, iloveyoubaby!, and the two of you run an art gallery together. Those occupations would not make most people think that you had expertise in criminal psychology or police procedure, but you clearly do. How did you acquire your knowledge?

The simple answer is that we have lived. And life can sometimes be hard. Read a newspaper and you will soon discover that the reality often surpasses the poem. The fact is that the books are very personal, although it is fiction. We dug into ourselves. Used our friends and things we read in the newspapers. We are both interested in psychology, so it was a challenge to try to create Victoria to be as believable as possible.

From the start, The Crow Girl wasn’t even a crime novel. It was a psychological experiment between us both and that is probably still visible in our texts. It’s personal stuff. Elements of poetry, music, even mental illness, as we were not very happy guys when we wrote it.

You can see the trilogy as a psychotherapeutic treatment. The first part is the meeting with the psychologist. There is frustration, anger, and chaos. The second part is more analytical and thoughtful. The problem will come to the surface, and one begins to understand what it is all about. The last part is a form of catharsis. Reconciliation, and to some extent, also forgiveness. Linguistically, it was difficult in the beginning to make prose of heavy psychology, but we struggled and finally found a language that suited us both. We also let a psychologist read our texts to get feedback.

What police work is concerned, we have no experience at all. We've seen movies and read some literature, but our intention has never been to shine in that area. There are other writers who are much better able to depict it. In fact, we are quite afraid of the police.

What was the germ for The Crow Girl — and was it the same for the whole trilogy? Did you intend a trilogy when you started?

Anger. We were cursed with so much crap in the world and felt that we needed to express it. We were simply angry about everything that happened around us and in society (both in Sweden and abroad). Above all, it was frustration at how women are treated. Sexual harassment, fear of being raped, etc. We came up with the plot together. We both contributed ideas and intrigue. Since we both are autodidacts, we lacked the right tools to write a book. We had the story in our head and wrote entirely without the synopsis. We learned the craft along the way, so to speak. Because it is such a complex story, today it is difficult to say who came up with a specific idea. The book is the result of good cooperation.

In regards to the trilogy format, we originally wrote it as a single novel, but our Swedish publisher thought it was better if we divided it into three parts. Our American publisher brought it back together into a single book.

How do you work together? Do you argue with each other, and if so, about what?

At the beginning, we sat at home and sent the chapters to each other via email. Jerker wrote often on the subway on the way to his job.

When we are about to finish a novel, we usually go abroad for a few weeks and isolate ourselves, ideally to a country where we do not speak the language. Anything to feel vulnerable and exposed. We want to live with the book 24 hours a day, until it becomes quite odd. When we finished The Crow Girl, we went to live in the South of France and at one point one of us collapsed, purely from the psychological intensity. It was scary. But for about two years now, we write full time. We have a combined office and an art gallery and we work between 9 a.m. and 4 p.m.

We sit opposite each other, so that we can answer questions directly. It is also useful when one of us is stuck. We just switch computers and continue where the other one got jammed. Our creative process is difficult to describe. Especially afterwards, but we have an approach that is based on discussion and conversation.

Writing together professionally is not so difficult because we also are friends in our private lives. We are not especially prestigious, and we trust each other's criticism.

When we write the synopsis, all of our ideas and whims are allowed. Often the work is done over a beer or glass of wine at one of the restaurants nearby. We discuss ethical, philosophical, and moral dilemmas (plus football), always searching for a common thread. Later, when we have written for a while — a month or so — we sit down again, and that's when the story might change. Our editors do not like it.

We live 200 meters apart and, in between, we have our combined office and gallery. We are two very different personalities that complement each other well. One man's shortcomings are compensated by the other and vice versa.

Linguistically, our differences make the text grow in between us. It is a hybrid of the one man's academic circumstantiality (Jerker) and the other’s ADHD-like restless short chopping unit (Håkan).

We add and erase. Jerker writes in a blue font and Håkan in red. When the text is finished, we make it black. We always try to make sure that we are both satisfied. It may take time, but it’s necessary. In rare cases, it is the writer of the text which has veto power.

We have previously been called Detail-Jerker and Synopsis-Håkan. There is some truth in that, but in recent years it has begun to level off. We have found a common language. A language called Erik Axl Sund. He is a writer with two brains, two persons experiences and reflections. For the most part he´s also a little bit smarter than each of us. He is also a little cockier than us.

The characters who are actually multiple personalities in the same body are shifting and complex. Was this aspect of the novel the most demanding for you to write?

We dug into ourselves, looking for the things that formed us and made ​​us who we are. As we said before: Even if you do not believe it, the novel is incredibly personal.

To write from a female perspective was obvious because we both hang out with mostly women. Moreover, we have the conviction that the difference between men and women is negligible. Gender is largely a social construction. We just started from our own way of thinking, and placed those thoughts inside a woman.

A detail question: One of the characters is allowed to legally "disappear." That is, her records are sealed and her identity is hidden because she has been abused. Is this an actual procedure in Sweden?

Yes. Even though it is not so common. But if the child needs to be protected, so…

What’s ahead for your partnership? What are you working on now?

Our fourth novel, Glaskroppar (Glass Bodies), has been released, and we are now working hard on a fifth. It will be three standalone novels on the theme of melancholy. Black, grey and white melancholy.

The setting is in the same fictional Stockholm that we created in the trilogy of Victoria Bergman. Some people will come back, some who were minor characters will become main characters, and so on. But we want to emphasize that this isn´t a continuation of our previous novels.

In addition to writing, we work at our gallery in the hopes that it will become more popular and eventually feature an exhibit of our own art. We’re simply extending our cooperation. We've done music, film, and written books together. Now, we paint pictures.

An Interview with Paulette Jiles

The novelist/poet discusses westerns, accolades, and her admiration for world-building narratives.