Meet an author who wrote her way to acceptance of her newborn daughter’s unexpected medical condition. 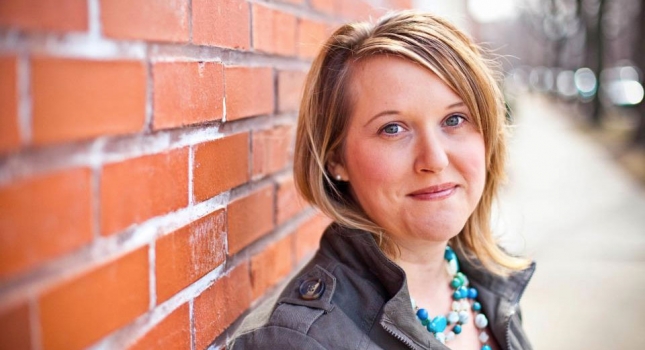 Gillian Marchenko’s spare and lyrical memoir, Sun Shine Down, tells the story of her coming to terms with her third daughter being born with Down syndrome while the family was living in Ukraine. Brutally honest and unflinchingly introspective, it explores Marchenko’s struggle with accepting a child who was so different from what she expected. Her voice is that of the girl next door — immensely real, readable, and sympathetic. Her story can happen to anyone, and she is someone the reader roots for and looks forward to hearing from again.

You seem to be a natural born writer, namely someone who processes her life through writing. When did you first conceive of writing this book?

St. Augustine said, “I count myself one of the number of those who write as they learn and learn as they write.” Words have always proved worthy opponents to my emotions. In 2006, I went to the blank page to work through my surprise and grief over having a baby with Down syndrome. At some point later on, I realized that my journal entries were a natural skeleton for a book, and I started working in that direction.

I have to ask you the typical memoir question: Did you have any qualms about writing this book in terms of what Polly would think when she’s old enough to read it? And, if so, how did you reconcile those qualms with your need to tell the story?

I didn’t think much about Polly’s future opinion of the story until the book was published. I had tunnel vision. All I could see was the work in front of me. Once I held a copy in my hands, I was like, “Oh, yeah, she may have an opinion about this.” One of the major themes of Sun Shine Down is that Polly, her essence and her person, changed me. Although I went to various outside sources to learn to love Polly — culture (shifting back to the U.S.A. in the hopes that a more accepting culture would make the difference); alcohol (as an escape and a “boost”); and religion (as in “she is a gift, she is for a divine reason”) — none of it worked completely. It was Polly, Polly the person, who showed me that love was deserved simply because she is lovable. Her life truly became the sun. I hope that if/when she reads the book, she’ll feel that warmth.

Sun Shine Down could easily have become a book about Down syndrome, yet you managed to stick to telling your story, while elegantly addressing puzzling questions head on. How did you manage that?

Wow. Thank you. I didn’t realize I did that!

In studying memoir, I learned that anything worth its weight on the page needs to connect universally with the reader. In order for that to happen, the story has to become less about the author and more about reaching that universal truth. Sun Shine Down started with the premise of a mother unsure of how to love a “broken” child. But as the words tumbled forward, it wasn’t that simple. Deeper themes about humanity emerged: expectation, ignorance, and fear of one’s own brokenness. Upon reading the description of the book, one would assume it is solely about special need. But my story does not deconstruct disability, but rather deconstructs the ways that a parent comes to grips with a person who is not whom she expected to raise.

The title is intriguing. On the face of it, Sun Shine Down doesn’t tell a prospective reader what the book is about. Once the reader knows the story, however, it connects on many levels. It almost feels as if that title mimics the narrator’s journey: You have to get inside to see the meaning. How does it connect for you?

I love that. The title mimics the narrator’s journey. To me, Sun Shine Down has two meanings, both equally apropos to the narrative: the sun fell with Polly the Diagnosis and rose with Polly the Person. It now shines down on me through her life. The duality of the title is what really makes it connect for me.

With Polly’s birth, you say you were “no longer just an ordinary mom. People would know me as a mother to a child with Down syndrome.” How much do you think that label has actually been stuck on you? Toward the end of the book, I felt that this label mattered less to you because you were able to see Polly simply as your baby. Is that true?

Yes, it’s true. It was a self-imposed label and all-encompassing in the beginning of our journey. At first, I was hyper-focused on Down syndrome. But with time and growth, I’ve learned to let go of labels. The “special-needs mom” is part of my identity, but not me entirely. That’s one of the million lessons my daughter has taught me, namely not to care so much about what other people think.

A large part of the struggle in your memoir is coming to terms with shattered expectations. Nevertheless, even while in her heart the narrator hasn’t accepted that she now has a child with Down syndrome, she does have dormant expectations of her child and herself as a mother. She fiercely rejects the low expectations Ukrainian society seems to have of people with Down syndrome, and swiftly moves the family back to the U.S. because of the better opportunities for special-needs children. What are your thoughts on how expectations shape our lives? Did your own expectations of what kind of mother you should be help you pull out of your depression and rise to the challenge?

I think expectations of what kind of mother I should be still helps me rise to challenges in my life. They give me something to shoot for and help take me out of the here and now to look toward the future. Of course, expectations also hinder me because they are often too high, farfetched, or just plain wrong. But I am still thankful they exist. I think a person needs to have a balanced view of expectations.

I felt that the reasoning behind leaving Ukraine was given short thrift in the book. Is that because it was more of an emotional response than a rational consideration of options?

My husband, Sergei, and I made an emotional decision to leave Ukraine abruptly after finding out Polly had Down syndrome. Although I had lived there for almost four years, spoke Russian, and had a handle on the culture, it all became profoundly foreign to me again after hearing the words “Down syndrome.” I desperately wanted America. I wanted Target. I wanted my mom’s pot roast. I wanted Down syndrome explained to me in English, and I wanted help from a structure already in place, i.e., therapy for Polly, support for our family. I remember voicing a pro and con list for leaving or staying in an attempt to be logical, but even in my feeble attempt at level-headedness, emotion trumped logic. We claimed we were returning to the States for a year at first instead of indefinitely, and just went with that.

The concept of home is important in your book, especially when dealing with a crisis. Repeatedly, the narrator says she “wants to go home.” However, upon her return to her home state, she doesn’t find the anchor she’s looking for. This unsuccessful search for home strikes me as a rite of passage: It was the narrator’s job to create her own home and to rise to the challenges. Do you feel you are finally “home”?

The concept of home is tricky for me. I’ve been married 16 years, and we’ve moved eight times. Here are the things I’ve learned about “home.” It isn’t a place. When I lived in Ukraine, I was keenly aware that it wasn’t my home. After giving birth to Polly, I yearned for the home of my childhood because it signified comfort and safety. But no matter where I was in those early months, Ukraine or my parents’ living room, I found no home until I looked within and grappled with what I found there. Oftentimes, one needs to hurt in order to peel back layers until truth is revealed. Comfort and safety occurred in a place I had never stepped foot in before, temporary housing for our family in the States, because my heart was performing the difficult work of transformation. Home became a feeling — fluid, moving, and growing. Home is now present tense and inward.

What comes next for you as a writer?

Right now I am writing a memoir about motherhood, depression, and faith. My agent sold the project on proposal to a publishing house called InterVarsity Press. The manuscript deadline is November 2014, so I am busy typing away at home and in coffee shops while my four daughters are at school.