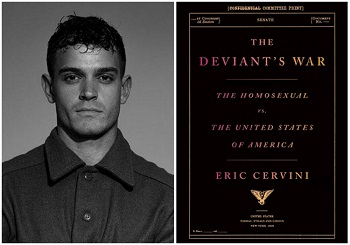 When asked to explain what the atmosphere was like for gay men and women working for the federal government in the 1950s, historian Eric Cervini says, “It was essentially like The Crucible.” In his new book, The Deviant’s War: The Homosexual vs. the United States, Cervini details how, with echoes of Arthur Miller’s classic, gay members of the federal workforce became targets of the government for their “deviant” behavior.

The book centers on an irascible astronomer, Frank Kameny. Hired by the government during the space race and then fired for a charge of homosexual conduct, Kameny decided to fight back and, in the process, helped change how the U.S. government viewed gay people.

I talked with Cervini about Kameny’s influence, the evolution of the gay rights movement, and what insight this history can offer to social justice movements today.

You write that federal government workers like Frank Kameny worked with “a sword over their heads.” And I think one of the fascinating insights that Frank came up with was to develop gay self-respect as a way to remove that sword. How did that insight influence the larger gay rights movement?

Kameny’s contribution to our movement and to American history is his formulation of a gay plaintiff who is willing to openly declare the moral goodness of homosexuality. And the reason he was able to get there was because the government had this two-pronged approach to justifying their persecution, which we all know just came from disgust and political purposes, but they justified it on a legal level by claiming, first, that gays were inherently immoral, just by engaging in homosexual activity. And second, that they were necessarily secretive about their sexuality.

So, Frank said: You're making two very arbitrary claims. One of the most logical ways to disprove those claims and to prove their arbitrary nature, and therefore the unconstitutional nature of them, is to argue their logical opposite, which is that homosexuality is morally good and to make that claim openly, as a gay man, with my real name. And his most influential action and strategy throughout the 60s, a decade before Stonewall, was persuading more and more plaintiffs to follow his lead, and second, to persuade the ACLU, which, until Frank Kameny, did not believe that gay rights were a valid civil liberties issue. He forged that alliance.

Kameny, for all of his revolutionary ideas, also took a very strict, businesslike approach to his protests. He required that people wear suits and ties, and be clean cut. Later, there was a lot of pushback from younger gay activists who didn't want to use conformity as a political tool. How did that split play itself out as time went on?

I very consciously wrote this book as a cautionary tale. I think there's a reason why we don't know [Kameny’s] name, and partially it's the fault of historians and public intellectuals, but partially it’s his own fault! He was attached to this idea of a respectable image. And, for him, it was a very strategic thing. If we, in his words, want to be employed, we need to look employable.

But if you're demanding that people are wearing suits in a protest outside of Independence Hall in Philadelphia on the Fourth of July when it's 100 degrees out, then you're going to be preventing a lot of people from joining those demonstrations, because it's also signaling that you have to look a certain way, literally, in order to be able to protest. It wasn't really until Stonewall when people said we need to be protesting, as we are, we need the numbers. And it doesn't matter what you look like — it doesn't matter whether you're dressed in drag, or you're trans, or have a beard — we need all the bodies that we possibly can have in order to resist.

And it kind of took [Kameny] slightly too long to really come around to that fact. But it’s also a complex story because he succeeded! The ACLU really adopted his strategies and his cause. We should be thanking him for the legal strategy and those foundations, but also we should be looking at his story as a lesson of how we need to be adapting and including the most marginalized within our movement, and we need to be fighting for the people we forgot.

What do you hope people take away from your book as we think about social justice movements in this time?

As we're having the national reckoning about race in America, we need to be asking who within our own community should we be talking about. A lot of people know the names of black lives that have been murdered at the hands of police departments across the country, but not as many people are talking about the trans people of color who are also being murdered, like Tony McDade in Tallahassee.

And it’s so crucial to be talking about them now because history shows that they are the ones who fought for us first, and then were the first to be forgotten. As we try to determine how to celebrate Pride now, we're the ones, especially white cis gay men, who need to take the lead and say, “Who are we forgetting within our own community? How do we elevate their voices? And how do we make history right?”

[Editor’s note: In a 6-to-3 decision yesterday, the U.S. Supreme Court ruled that the 1964 Civil Rights Act protects LGBTQ employees from being fired because of their sexual orientation.]

Carr Harkrader is writer and book reviewer in Chicago, where he also works for a youth leadership nonprofit.

A Q&A with the author of Vaclav & Lena