Maybe what we do to ourselves in covering up our truths is more painful than the original secret. 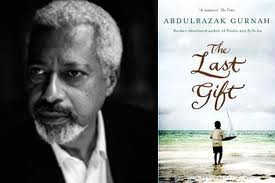 In The Last Gift, Abbas, the main character, has never told his secrets, until a debilitating stroke unblocks the dam of his silences and the memories won’t stop. Abbas’ wife, son, and daughter learn about their father’s childhood in Zanzibar from their comfortable small home in England. Abbas left more behind than he wants to remember.

How funny that Abbas, the main character, lives in the outskirts of London and refers to his neighbors as “these European foreigners.” Perhaps it’s true that wherever one is, is home, but only inside the house. Do you believe that anyone ever really gets used to being an “immigrant”?

I don’t know if people get used to being immigrants, but I expect it’s very hard if they have a strong enough memory of the place they started from. But getting used [to it] is different from being adrift in it, feeling unattached in it, having no stake. So there are different kinds of getting used to it, and different satisfactions to be had from embracing or rejecting the experience of migration.

Whose choice is it to assimilate? Often, it seems as if the immigrant transports himself with his home and simply lives out a life as close to the original as he can make it, just in another venue. But the natives have to agree, too. Otherwise, assimilation isn’t possible, and one is always confined to a sort of “foreignness.” And, yet, if one were to attempt to return home, one becomes a real foreigner. Why is this so often true?

Of course, if the reception is hostile, that would make a difference to how a person feels, but I suspect there is an inwardness about the experience of dislocation that anticipates rejection and looks to the resources of the self for survival and what happiness there is to be had.

This reader remembers being jealous of friends who had homelands and relatives to visit in “other worlds.” Is Zanzibar a retreat, a difficulty, or a puzzle for you?

I go to Zanzibar to return to something that is real and present in my life in a unique way. It is not a retreat; I return from it with a sense that I did not imagine it, and that what I thought was lost and destroyed really was lost and destroyed. It is only a difficulty because memories of that wastefulness are difficult, and it seems to be taking so long for the things that went wrong to find a resolution.

You say that “stories don’t stand still,” and yet, the movement of the story can only be heard by a careful listener, like your character Jamal, Abbas’ son. He was always a listener and clearly a very kind and warm young man. Is there a correlation between the two?

I don’t think so, although I suppose a kind and warm young man may be inclined to be a listener. He might just as easily be a talker.

Abbas becomes a “white haired elephant on a concrete pavement.” Can he forgive himself?

You describe the movement of his pain with red and green lights, like traffic signs. Is the pain really that he stopped himself from going?

Abbas describes his father as “looking dangerous and comic at the same time,” as if they should be inherent partners. One wonders if this isn’t perhaps a momentary feature in all father-son relationships, especially when the son begins to lose his fear of his father. Does he see this only after he begins his education in the city? What is it in Abbas’ father that marks Abbas’ nature? Does Jamal have this same moment with Abbas off camera?

You are raising interesting speculations and I think I’ll leave you to them. Except to say that I expect he would have found him dangerous and comic without going to school in the city.

“All those years of overlordship can cast a pall on the self-esteem of the future.” This is truly something to think about. Cruelty, too, has a much longer reach than most of us would like to admit, and it cuts both ways. An institution like slavery still marks current generations, long after the practice has ceased. How will immigration leave its mark on future generations?

It leaves its mark on each generation differently, I think. So much depends on chance and accident, what an individual brings and finds, what he or she can make of things, what is left behind, what is lost. Then the generation that follows has to engage with different issues and with parents who went through unknowable experiences. So marks will suit the object.

Memory is like a recalcitrant child, yet Abbas manages the superhuman feat of controlling his memory for years. Is that the exercise he performs during all of his silences? Why?

Because he thought he had no choice.

Maryam, Abbas’ wife, spent her childhood in foster care. She tells her children the story of her servitude and how it slowly manifested — she and both of her foster parents simply went along.Do you think this is how many humans do the most harm?

“Are you play acting your non-existence?” Jamal asks this question of his neighbor, another old immigrant.Is this the eventual end of an old man and not just an immigrant man? Do we all do this a little?

Jamal becomes suspicious that his neighbor is playing morbid games about his self-representation and has not yet understood that the game he is in is evasion.

Why does profundity always show up after death, even in literature?

Because a lot of the time, we only know anything of any importance after the moment of its usefulness has passed.

Abdulrazak
Gurnah is the author of seven novels, including
Paradise, which was shortlisted for the Man Booker and Whitbread prizes,

By the Sea, Desertion, and Pilgrims Way.