An Interview with David Swinson 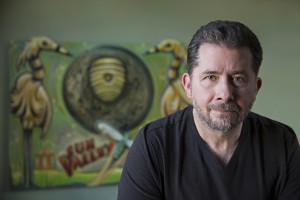 David Swinson is back. Or rather, his alter ego, Frank Marr, is back, in Crime Song, the second installment of his gritty “‘The Wire’ on paper” crime series. Once again, the plot involves drugs, burglary, and murder as seen through the eyes of Marr, a down-on-his-luck P.I. whose cocaine and alcohol addictions forced him into early retirement from the DC Police.

Now, barely eking out a living and desperate to feed his habits, Marr agrees to take on a family case — a favor to his aunt, who, after his own mother died, was a surrogate mom to him growing up.

Soon, Marr’s investigation leads him from small-time drug dealers to coming home to find a body on his kitchen floor; the revolver used in the murder is Marr’s own. As with Swinson’s first book, The Second Girl, nothing is as clear-cut as it seems, and Marr soon enters an underworld filled with stolen goods, questionable cops, and one morally compromised taxi driver.

It’s a world Swinson knows well, having served 16 years with the Washington Metropolitan Police Department. The pages crackle with rough-and-tumble language, and Swinson writes with a commanding knowledge of dirty police and dirtier bad guys, all played out on the mean streets of DC.

You’ve had a past just as colorful as your characters’. How do you go from owning a record store to booking punk rock bands in Long Beach (home of Black Flag and Green Day) to joining the DC police force?

I quit booking around 1989 to co-produce a spoken-word album for Atlantic Records called “Sound Bites from the Counter Culture.” It featured such luminaries as Jello Biafra, Abby Hoffman, Hunter S. Thompson, and Henry Rollins, just to name a few. After that, I co-produced the film “Roadside Prophets.” After that, I fell into other projects that never saw the light of day.

I gave it all up in 1993. I knew I was a writer at heart, but there was a time in my childhood, and then again in my early twenties, where I thought I would go into law enforcement after college. It’s not like it just popped into my head, and I said, “I’m going to be a cop!” It was always there, like writing.

So I quit smoking, got in shape, and put in an application with the Metropolitan Police Department in Washington, DC. I chose DC because my father was in the Foreign Service, and DC was always home base between countries. I also finished up high school there. You can either go with that, or [that] I simply went from booking bands to booking criminals.

One of your subplots in Crime Song involves the theft of Frankie’s collection of vinyl albums. Did you draw on your past life as a record-store owner for this?

Partly, but more because I was a record collector and my vinyl collection meant a lot to me. My ex-girlfriend, in California, has the collection now. I managed to save a few, though. Music has always been important in my life. I wanted to show that side of Frank Marr, too.

Frank is an antihero in the mold of Don Draper and Walter White. What makes you so interested in having a protagonist who’s so damaged?

Frank Marr doesn’t know how damaged he is. He likes his lifestyle, much in the same way that Don Draper did (in the beginning). You can only take that kind of a lifestyle so far. I like the idea of exploring that, and having a character that doesn’t whine or complain a lot, even though he has plenty of things to cry about. He is content. Trying to hide his way of life and lying has become just as much a way of life as his addiction.

Who would you rather hang out with, Frank Marr or Henry Rollins?

Frank Marr, of course, but only if I didn’t know he was a coke addict. Well, maybe even then. I booked a few shows with Henry at Fender’s Ballroom and Bogart’s in Long Beach, CA, when he was with Black Flag, the Rollins Band, and solo with his spoken-word stuff. He’s a nice guy, and smart. I’d have more fun picking Frank’s head, though.

Did you write any of your first Frank Marr installment while on the force?

No, I wrote the first draft of A Detailed Man while on the job, but the idea of the Frank Marr character did come into my head all those years back. I didn’t start writing The Second Girl until a few years after I retired. That’s how long he’s been with me.

Is Marr a composite of cops you knew?

There is a lot of my life experience in him, but he is not based on anyone I know. I created Frank Marr because I wanted someone who was so far removed from me, but not that life experience. This allowed me to have fun writing the book.

Any idea of who could play Marr in a movie, and are plans in the works for one?

There has been a lot of interest, and I believe my agent is in discussions. I never had a vision of an actor in my head while writing the books. I will say that Tom Hardy would make a great Marr.