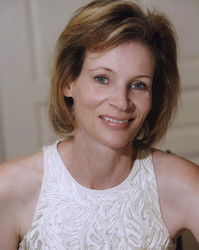 Andrea Mays’ debut book, The Millionaire and the Bard: Henry Folger’s Obsessive Hunt for Shakespeare's First Folio, is the story of one man’s unwavering quest for Shakespeare’s collected works. Mays’ narrative is laced with the intrigue of the hunt for literary treasures combined with a masterful biographical profile of a self-made millionaire obsessed with the idea of saving Shakespeare’s genius for future generations.

How did the idea for this book come about, given that your background is in economics, a subject you teach to college students?

My husband and my agent suggested that if I were to write a book, I start with something I enjoy, something I already know something about, rather than starting from scratch. That was excellent advice.

My path had intersected Henry Folger’s on three occasions. In middle and high school, my teachers used the Folger editions of the Shakespeare plays. In graduate school and law school at UCLA, I came across Henry Folger as a defendant in the 1911 Standard Oil Company of New Jersey v. United States antitrust case that resulted in the breakup of Standard Oil. In the late 1980s, I moved to Washington, DC, and walked by the Folger Library on Capitol Hill every day.

My economics background was helpful when it came to explaining Folger’s business life, running the largest corporation in the world, and how his business tactics informed his pursuit of the Shakespeareana he so craved. Anyone who knows of Henry and Emily Folger knows precious little about the source of the wealth that permitted the acquisition of the vast collection that fills the library that bears their name. I wanted to fill that gap.

What is the First Folio and why is it so important?

The First Folio is a large-size volume of the first authorized collection of 36 of Shakespeare’s plays. Its size was important in that, in 1623, when the book was published by two of Shakespeare’s fellow actors and business partners, John Heminges and Henry Condell, plays were considered ephemeral amusements and not literature. Heminges and Condell are the two greatest unsung heroes in English literature. [Thanks to them], these masterpieces survived.

Henry Clay Folger is the hero of your book. What explains why this onetime clerk at a local oil refinery who transformed himself into a well-to-do capitalist spent so much of his money and time pursuing the works of a playwright?

First, Henry Folger had the quintessential Horatio Alger rise to prosperity and power. He was born into modest means, and with the help of a wealthy and influential friend, Charles Pratt, he was able to finance his education at Amherst and, after graduation, secure his first job at the oil company owned by Pratt. Those were the first rungs on his ladder to success.

The Millionaire and the Bard is part biography, part detective story. How did Henry ferret out and relentlessly pursue the treasures he coveted? He applied the skills he learned as an executive at Standard Oil to his dogged chase for Shakespeareana — from the mundane to the sublime, from tourist souvenirs allegedly carved from the wood from a mulberry tree planted by Shakespeare to choice copies of the First Folio.

I have read Henry Folger’s letters, both personal and business. Among others, he wrote to Howard Furness at the University of Pennsylvania about the plays. Folger did not collect the books and other Shakespeareana as fetish objects; he read the plays, sonnets, and poems, watched performances, and discussed them with his wife, Emily, and with scholars.

Henry fell under the spell of Shakespeare for the three reasons most of us do. First, Shakespeare was a master of multiple genres, tragedy, comedy, and history. Of course, he was not the only talented playwright of the era. Ben Jonson wrote fantastic comedies. Christopher Marlowe wrote memorable and popular tragedies. Others wrote histories or fables. What made Shakespeare extraordinary was that he was the only one to master all of those genres. And poetry, as well!

Second, Shakespeare fleshes out his characters so well that we recognize ourselves in them. He shows us that people have not changed that much over four centuries. From the plays and poems, Folger was able to learn about love, loyalty, competition, jealousy, rage, indecision and impulsiveness, marriage, death, sorrow, and any other human emotion or circumstance you can imagine. Lastly, Shakespeare’s stories and poetry are compellingly beautiful.

How important was Folger’s wife, Emily Clara Jordan, to your story?

Emily Clara Jordan was Henry’s partner in marriage as well as in the pursuit of Shakespeareana. If a man assiduously collects empty cans or stacks of newspapers and magazines, we call him a hoarder. If he hoards valuable books — hundreds of thousands of items — we call him a “collector” and admire him.

Many collectors whose lives are consumed by the pursuit and acquisition of the objects of their lust have difficulty in their personal lives when, first, they run out of room to put the stuff in, and second, when their partners cannot understand or tolerate the obsession.

Henry and Emily solved the first problem by putting the overwhelming majority of their collection into storage. The second problem [wasn’t one] for Henry because Emily shared his passion both for Shakespeare and for the acquisitions. She read the catalogues, marked what she thought he should buy, wrote a Master’s thesis on “The True Text of Shakespeare,” and enjoyed watching and analyzing the plays and collecting the books as much as Henry did. It was Emily who wrote and organized thousands of index cards of the bibliographical details of each item they acquired.

So much of your work is based on original research. Share a little bit about some of the nooks and crannies you peeked into while writing your book.

Folger was a collector, saving his own memorabilia for posterity and leaving it to the Folger Library. Most of his personal correspondence (and check-book stubs), as well as multiple letters to around 600 dealers over 30 years, is preserved at the library. In addition, the Standard Oil Archive at the Ransom Center at the University of Texas has materials related to Henry Folger’s work at Standard Oil. Lastly, I went to the Rockefeller Archive in Westchester, New York, and read 30 years’ worth of reports and memoranda, as well as correspondence between Folger and his mentor, John D. Rockefeller.

I also visited Amherst College, Henry’s alma mater, to get a feel for what his college life must have been like. One thing I found at Amherst was the presence of the Pratt family — father and sons — all over the campus. Charlie Pratt was Henry’s lifelong friend from high school, with whom he worked at Charles Pratt’s oil company immediately after graduating college. Charlie Pratt introduced Henry to Emily; when Henry and Emily finally bought a house, shortly before Henry’s retirement, it was in Glen Cove, Long Island, to be near the Pratts — and also his favorite golf course.

No single writer has had a greater influence on literature, language, and the concept of modern man than has Shakespeare, and the survival of half of his plays is owed to the First Folio. He characterized every aspect of mankind in the 17th century, and man still fits the mold. His plays are an important bridge between the ancient and the modern plays.

Add to that his expert use of prose, rhyme, and meter; invention of words (undress, courtship, puking); and contribution to our own language through phrases we still use, whether we recognize them as Shakespearean or not. If you have “knitted your brows” or had “too much of a good thing,” you have spoken his words. He warns us to “Beware the Ides of March” and to “give the devil his due”; that jealousy is the “green-eyed monster.” “It’s all Greek to me!” “What’s in a name?” And on and on.

Lastly, Shakespeare continues to influence other writers — from Keats to Carlyle, from Huxley to Bradbury, and to television’s “Dallas” (which is based on King Lear). That is the long and the short of it — which is also a phrase from Shakespeare.

Some tend to equate wealth with greed, and capitalism with the kind of individualism antithetical to the common good. In that regard, what does the Henry Folger story tell us about capitalism and philanthropy?

The Folger Shakespeare Library is a monument to capitalism and philanthropy. The Folgers used most of their considerable wealth acquiring their collection, with just enough left over to build and endow a library they intended to be a magnet for Shakespeare scholars.

There is no mention of the source of their wealth anywhere in the library, and I wanted to fill in that blank with the tale of Henry’s importance at Standard Oil. Henry wanted to liberate First Folios, among other books and objects, from the dusty libraries of the British elites, bring them to America, and build a library where scholars would have access to the greatest collection of Shakespeareana in the world. They succeeded beyond their wildest dreams.

The Folger Library in Washington, DC, was yet another of its namesake’s great accomplishments. Is there anything you think the library could do today to enhance the reputation of both Shakespeare and Folger?

They are already doing it! Through the newest Folger Editions of Shakespeare’s plays, they reach hundreds of thousands of students every year. Through the Folger Institute and other outreach programs, they show teachers the best ways to make Shakespeare accessible to students.

Through numerous programs and theatrical performances, they expose young people to the plays. By digitizing massive amounts of materials, including thousands of pages of First Folios, and through magnificent exhibitions, they reach the public.

The only suggestion I have [for the library] would be to engage in some cooperative advertising with the United States Supreme Court, Library of Congress, and United States Capitol visitors’ centers. Enormous numbers of tourists and groups visit those locations without knowing that a free exhibition, tours, and performances are available just a block or two [away].

What is your favorite Shakespearean play? And what life lesson has it taught you?

I am going to cheat a little on answering this — for which I would flunk my own students! I have loved different plays at different points in my life. When I was in high school, I loved the impetuousness and romance of Romeo and Juliet, aware of its lesson against the dangers of rash action, as well as the role of fate.

In college, I found As You Like It compelling, with Rosalind the most spunky and strong female character I had ever read or seen. “Sell while you can,” she tells Phoebe, “you are not for all markets!”

By the time I was in my 20s and had more life experience, I found that Othello’s characters taught me with pathos and humor about love, loyalty, deception, and taking counsel from the wrong person. [When] I was studying law and economics, Measure for Measure and The Merchant of Venice illustrated that concepts of justice, tyranny, and freedom have not changed all that much in 400 years.

Working in government in Washington, DC, I found that Timon of Athens spoke to me about loyalty and how people treat you when you are “in” and when you are “out.” Right now, my favorite is The Merry Wives of Windsor, mostly because Falstaff, Mistress Ford, and Mistress Quickly put me in a very jolly mood!

Ronald K.L. Collins is a member of the Independent's board of directors.