An Interview with Kate Clifford Larson

The historian talks civil rights, LBJ, and the force of nature that was Fannie Lou Hamer. 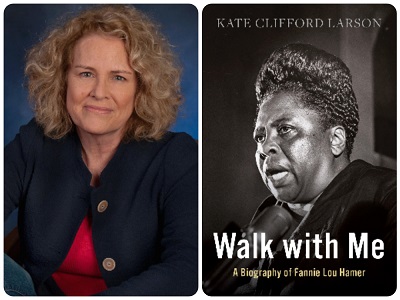 Historian Kate Clifford Larson is also the New York Times bestselling author of several biographies, including Bound for the Promised Land: Harriet Tubman, Portrait of an American Hero and The Assassin's Accomplice: Mary Surratt and the Plot to Kill Abraham Lincoln. Her new book, Walk with Me: A Biography of Fannie Lou Hamer, chronicles the life of a trailblazing civil-rights icon. It came out earlier this month.

That is a great question! I think a little of both. I learned about Hamer more than 25 years ago when I enrolled in a master’s degree program in gender studies at Simmons University here in Boston. She stayed with me, in a sense, through my studies there and when I went on to earn my Ph.D. in history at the University of New Hampshire. I researched and wrote my dissertation on Harriet Tubman, another great American freedom fighter. After my book on Tubman came out (now almost 20 years ago), I kept thinking about Hamer, but other book projects floated to the top. I think I wasn’t ready, professionally, to take on Fannie Lou Hamer. My strength at the time was 19th-century African American and women’s history. But over time, my interests and scholarship expanded into the 20th century. Hamer was still there, sort of waiting in my mind. When I discussed the idea of this biography with my literary agent, I told her I thought I was ready, and she agreed. I am so glad I listened to my voice, Hamer, and my agent! What a personal and professional journey it has been researching and writing about her life.

There is searing anger and pain on the pages in this book, particularly regarding the abuse Hamer faced by police after her arrest in Mississippi. That chapter is particularly difficult to read. How hard was it to write?

That chapter was extremely difficult to research and write. I pored through all the FBI, Department of Justice, and trial records, as well as dozens of interviews to get a clear picture of what happened. It was a brutal and painful process, but I was far removed from it, and I could walk away and take a break now and then. Hamer and her colleagues could not. I had to keep my historian hat on and be objective. In the end, I could not be completely objective. I knew what happened and I had to find a way to get readers to hear, see, smell, and feel what happened. It is hard to read. It is hard history. But I had to honor Hamer [and] the other women and men who endured unspeakable horror by telling the truth. I relied on close friends and colleagues to help me write through it. I am grateful for their help and support to get me to the place to be able to write it. I ask my readers to not look away.

In the course of your research, how well did you come to know Hamer?

I came to know her quite well, though as with any subject, I cannot really know her. I learned that what she sometimes told the public was…not what her reality always was — [reality] was sometimes worse. I had to keep my distance sometimes to be able to identify those moments where she changed her story in service to the cause. She needed to get people’s attention. She was poor, poorly educated, Black, and female. She did not have easy access to pulpits and stages because more powerful people did not want her to take the stage. She had specific goals and refashioning her own story to fit those goals made writing her biography complicated sometimes.

She was deeply shaped by her devotion to family, faith, and community, and her fight for freedom and equality. Those values are something most of us can identify with, see, and feel. The deep inner reaches of herself she kept close.

People now ask me what I think Hamer would be thinking about the state of politics and our democracy today. I can’t be sure, but on the one hand, I don’t think she would be surprised. I think she would be pleased to see that we have made some gains she died in 1977. She would be energized to see more African Americans voting and making a difference in elections and see more Black men and women holding elected office. She would also recognize the same old insurgency of white supremacy gathering strength and trying to suppress those votes and that progress. White supremacy never went away, it just kept percolating. She would have seen it everywhere, rising and becoming more powerful. She would, today, be screaming and yelling to get people out and protesting!

Why do you think there was so much infighting between the various groups that advocated for civil rights?

I think we see this today with all political parties and social movements, like Black Lives Matter and #MeToo. People join together in common cause to make changes, but they come at the process with different skills, backgrounds, needs, and goals. Young people’s activism is different than the work of older activists. Every generation goes through this…Issues of class and race played a role, too, for Hamer and her colleagues. Elites saw things differently than grassroots organizers like Hamer. And women were treated like second-class citizens, making it even more difficult for Hamer and others like her to acquire power.

How pivotal was the treatment of the Mississippi Freedom Democratic Party (MFDP) at the 1964 Democratic National Convention in Atlantic City to the struggle for civil rights?

I think [it was] one of the most consequential events in the 20th century. It helped expose the hypocrisy and racism in politics in a way that hadn’t been acknowledged so publicly before. Hamer’s testimony — her plea — demanding equality and justice riveted the country, and its effects ricocheted for years. The MFDP lost their challenge to unseat the all-white regular Mississippi Democratic Party delegation…but the MFDP’s demands ultimately forced the Democratic Party to change its platform and the rules governing delegations. Starting in 1968, all delegations had to be diverse. By then, the party demanded fealty to civil rights. Southern Democrats (Dixiecrats) could not, would not, stand for it, so they defected from the party. They turned the historically Democratic Southern states into deep red Republican states, which remain solidly Republican today. Hamer struggled with what happened in Atlantic City. She felt betrayed by the national and state level civil rights leaders who sought a compromise — allowing the all-white delegation to be seated, while the MFDP got two “at-large” seats in the convention. Hamer could not understand why Black leaders were willing to take the two seats when they deserved them all. Some of those leaders were exceedingly cruel to Hamer. They told her she did not belong on the stage with them, she had no right to negotiate anything. She got a lot of attention from the press, especially after [President Lyndon] Johnson tried to silence her during her speech. The elites were embarrassed by her because she was poor and uneducated. But she represented millions of Americans who felt voiceless. She was not a professional politician and she spoke and made decisions based on her heart and on her own experiences in the Mississippi Delta. Those were experiences that Martin Luther King and leaders like him could not grasp.

Do you think President Johnson was genuinely interested in the plight of African Americans, or was he simply a cynical politician?

He was both. He had long grown tired of white supremacists — he knew they were a challenge to democracy. But he was the quintessential politician who looked for ways to compromise to keep his agenda — Voting Rights and other Great Society policies — moving. He had to make deals with racists he deplored. He needed their votes to pass the Civil Rights Acts of 1964 and 1965. It did not make him a solid ally of African Americans. At the end of his term in 1968, though, the Dixiecrats all fled the party and either voted for the leading racist of the day, George Wallace, or voted for Nixon.

Why should Hamer’s story be told now, at this point in our history?

The ongoing and new threats to voting rights and access to the ballot and the rise in right-wing racist groups show us that the gains made during the Civil Rights Movement of the 1950s, 1960s, and 1970s are not secure, and we need to stand up and carry on the fight that Fannie Lou Hamer gave her life for. Her story provides us with a blueprint, so to speak, and also reminds us of how far we have come and what more needs to be done to complete the promise of the Declaration of Independence that all people are created equal, and that America can be the greatest democracy on Earth.

Barry Millington is the Author of The Sorcerer of Bayreuth: Richard Wagner, His Work and His World.