An Interview with David O. Stewart

The novelist talks trilogies, family history, and the unending allure of the past. 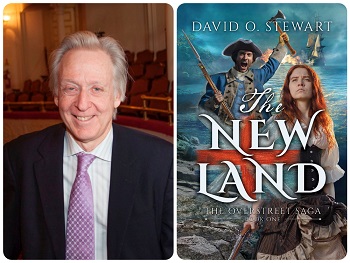 Attorney and award-winning author David O. Stewart, the Independent’s former president, has long written about history in both nonfiction works and novels. What’s unusual this time around is that his latest book, The New Land, was partly inspired by his own ancestors, who came to America from Europe in the mid-18th century.

The New Land is the first installment of a planned trilogy. Did you always intend to tell this story in three parts?

I’ve had stories about my mother’s family in my head for most of my life, and I hoped to write about them. But as I dug at the history, I couldn’t track down enough about individuals to write their stories. No old letters or diaries popped up, and the ancestors weren’t huge historical figures, or even minor ones. I finally decided on a fictionalized approach, to tell the story of America’s critical times through the lives of ordinary people. That led to the trilogy structure. Each book focuses on pivotal periods. The New Land, the first book of the Overstreet Saga, tells the story of a frontier settlement on the Maine coast in the 1750s, then follows the settlers through the Revolutionary War. Book two, The Burning Land, is set in the brutal Civil War years and westward migration. The final book, The Resolute Land, occurs during World War II.

The novel centers on German settlers in 1750s Maine, some of whom are your ancestors. How much, if any, of your family’s story appears in the book?

The outlines of The New Land follow the experiences of my ancestor Johann Gottfried and the difficult path of the settlers of Broad Bay (since renamed Waldoboro) in Maine. But I know little about Johann Gottfried beyond his wives and children and that he was a soldier in Europe. He and most of the novel’s characters come from my imagination. A few historical figures do crop up. Samuel Waldo, the crooked developer who lured the Broad Bay settlers to Maine, is a heaven-sent villain, charming and arrogant and corrupt. British General James Wolfe features in the French and Indian War chapters, and even George Washington makes a cameo appearance.

Historical fiction allows for creative license but demands a degree of veracity. How did you balance crafting the narrative you wanted with staying true to basic facts?

A saying for historical fiction is that you can make up a lot, but Lincoln has to be tall. Perhaps I should say that Washington has to be tall. Known facts should be respected. So the novel’s rendition of the siege of Louisbourg during the French and Indian War and the later Battle of Bunker Hill are faithful to those events. But the novelist has an open field to explore the interior and interpersonal human elements — the feelings, the relationships, the hopes and fears — plus all the small-scale occurrences that no one writes down but that make up a life. That’s always been the work of historical fiction, from Homer’s Iliad to Tolstoy’s War and Peace to Hilary Mantel’s Wolf Hall.

Your last trilogy — the Fraser and Cook mystery series — was also based in history, as are all of your nonfiction works. What do you find most compelling about mining the past?

History has the best stories. Even Moby-Dick was based on a real event. And the past is a foreign land — strange and unfamiliar and fascinating. The language is different, the social structures and expectations are different, yet we instantly recognize the people there and how they grieve and laugh and worry. Also, the historical novelist can use the genre to hide a bit, to stuff insights and thoughts into historical figures so those ideas appear more universal and less freighted with the baggage of today’s fleeting concerns.

When reading historical fiction for pleasure, which authors and eras do you return to most often?

I’ll read anything by Bernard Cornwell or Pat Barker. I love books that take me someplace I’ve never thought about, like the Dutch East-India Company around 1800 in David Mitchell’s The Thousand Autumns of Jacob de Zoet or 7th-century China as depicted in the Judge Dee novels of Robert van Gulik.

The Burning Land (book two of the Overstreet Saga) launches on May 4th; The Resolute Land (book three) will release in autumn 2022. And on February 8th, the paperback version will come out of my recent George Washington: The Political Rise of America’s Founding Father. That will keep me busy.

[Editor’s note: David O. Stewart’s recent conversation with Marie Arana about The New Land can be viewed here. He will also speak at the Gaithersburg Book Festival on May 21st in Gaithersburg, MD.]

An Interview with Bill Hutchins

The architect/poet talks about learning to love the forest.