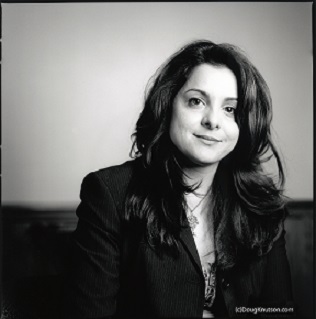 What compelled you to write The Persian Square? Was it a particular event, or had the idea been percolating for a while?

In February of 2010, when I read that the city of Los Angeles named a square in honor of the Iranian-American community, I was inspired. The intersection of Westwood Boulevard and Wilshire Avenue became “Persian Square.” Thirty-one years prior, in 1979, millions of Iranians were uprooted from their ancient homeland. Leaving families, careers and identities behind, many had to build new lives away from Iran. Some decided to stay; some were blacklisted from going back; others fear harassment of loved ones.

Once in America, many Iranian immigrants replaced fear of exile with a love for their adopted home and not only embraced their new homeland, but thrived and excelled in it. The more I looked into the past, the more I realized how Iranians and Americans have crossed paths over time, leaving traces in one another’s lands. I wanted to capture the Iranian immigrant experience. Once I started my research, I was surprised to see how far back the two cultures can trace their interactions.

This is an e-book, whereas your memoir, My Name Is Iran, was a traditional book. Did the electronic format cause you to approach The Persian Square differently, or is the writing process the same?

My oldest son, Saied, who is a successful Mac app developer, encouraged me to produce an interactive book where I could combine my skills as a public-radio producer with my training as a journalist and storyteller. In 2013, I published The Persian Square on Apple’s iTunes using the iBooks Author software. The book included over 30 media files, including video from Iran and audio from Sony Music, going to the early 1900s of Omar Khayyam poetry being performed in New Jersey! I could never have captured the breadth of material in a traditional book. I have now published the Kindle version using Pressbooks software. With the Kindle, I wasn’t able to embed video and audio, but I did include hyperlinks for further exploration. The multi-touch book is still immersive in that sense.

Did you uncover anything surprising in your research for The Persian Square, maybe a fact or statistic you didn’t anticipate?

Learning about the life story of Hajj Sayyah, believed to be the first Iranian-American in 1875, was most surprising. His experiences in the U.S. inspired him to return to Iran, where he became a champion for human rights. Hajj Sayyah became an influential backer of Iran’s 1906 Constitutional Revolution and was among the most prominent supporters of the Persian movement for democracy. The story is quite intriguing as Hajj Sayyah travelled throughout the U.S. from New York to San Francisco. He became a naturalized citizen in San Francisco in 1875. He went back to Iran and was eventually arrested for his political activism. After serving a prison sentence, he took refuge with the American legation (embassy) in Tehran.

On February 23, 1893, Watson Sperry, the head of the State Department’s delegation in Tehran, wrote a letter to then U.S. Secretary of State John Foster explaining that he was giving refuge to Hajj Sayyah as he was a naturalized U.S. citizen. Meanwhile, in a letter to Iran’s prime minister, Hajj Sayyah said he would rather have had “a limb amputated or eat a dead carcass” than take refuge at the U.S. Legation, but, ultimately, he felt he had no choice and sought asylum.

As my editor Azadeh Moaveni notes, “Hajj Sayyah’s experience illustrates how the West has been intertwined with Iranians' quest for democracy since the 19th century.”

What do you hope readers take away from The Persian Square? Is there one overarching idea you’d like them to understand about Iranian-Americans?

It’s important to document that while the Iranian immigrant experience in the U.S. flourished in 1979, Iranians have an older and richer past in America than they think. Ralph Waldo Emerson, for example, introduced Americans to Persian poetry back in the 1840s. The Persian Square also documents the rise of Iranian-Americans in the domain of science, technology, and literature as a testament to a proud tradition of education and learning that goes back centuries.

As an NPR producer, you’re generally expected to keep yourself out of the story. Writing a memoir like My Name Is Iran, however, forces you to be the story. How did that shift in focus come about?

Back in 2003, when my editor Deborah George realized that my first name is Iran, she insisted that my NPR series and American Radio Works documentary be called “My Name is Iran.” At the time, human-rights lawyer Shirin Ebadi had just become the first Iranian to win the Nobel Peace Prize, and I was researching the connection between my family and Iran's long struggle to reconcile modernity and traditional Islam.

I was tracing the evolution between my great-grandfather Ali Akbar Davar and modern legal reformers like Shirin Ebadi. In the late 1920s, as Iran's Minister of Justice, my great-grandfather drew up a progressive legal code for the country that combined Western legal precepts and Islamic Sharia law. I produced a three-part story for NPR’s Morning Edition in 2004 and, in 2007, published a memoir called My Name Is Iran. The approach made the NPR stories more personal, but also more accessible. Our senior editor, Loren Jenkins, also signed off on the approach, believing it to be the best vehicle for telling the complicated story of legal reform in Iran.

What’s next? Is there another book — electronic or otherwise — in your future?

Innovation in digital media is happening at a rapid pace. We need to find ways to produce and deliver compelling news and cultural information relevant to multicultural communities via the mobile platform. In the future, I hope to produce quality content for those who are hungry for social engagement beyond 140 characters on their mobile devices.

The Kindle version of Davar Ardalan’s The Persian Square: 101 Things to Know about Iranian-Americans comes out today on Amazon.com.