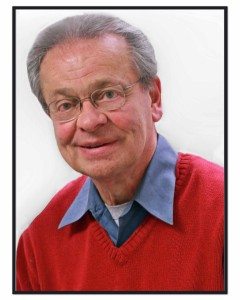 Mel Goodman is mad as hell and he’s not going to take it anymore. A Soviet analyst at the CIA and Department of State for 24 years and a professor of international relations at the National War College for 18 years, he’s authored, co-authored, or edited seven books, including National Insecurity: The Cost of American Militarism. Pulitzer Prize-winning journalist Seymour Hersh offers lavish praise: "Mel Goodman has spent the last few decades telling us what's gone wrong with American intelligence and the American military. He is also telling us how to save ourselves."

Goodman’s latest book is Whistleblower at the CIA: An Insider's Account of the Politics of Intelligence.

It's hard to know what's going on at the CIA. The NSA seems to have limitless powers, the FBI is its usual secretive self, and added into that, the Trump White House is what could charitably be described as an indecipherable mess. What's the current landscape vis-à-vis the CIA and some of your concerns about what's happening right now?

The other problem I have, and this is a major problem: The idea of having a secret agency in a democracy is always going to be difficult, and to have that without real oversight is incredibly problematic. So the organizations for oversight, the key external organizations and the key internal organization, have become extremely weak.

The external organizations, of course, there are the Senate Intelligence Committee and the House Intelligence Committee that were created in the 1970s, 30 years after the CIA was created. The internal organization is the Office of the Inspector General. President Obama terribly weakened the Office of the Inspector General, and for most of his eight years in office, there was no statutory inspector general at the CIA. Hillary Clinton didn't have an inspector general while she was secretary of state.

The Trump problem is based around two considerations. One, the militarization of the national security bureaucracy appointing so many generals, not only retired generals but active-duty generals, into key political positions. The national security advisor, for example, is an active-duty three-star general. The secretary of defense is a retired four-star general. The head of the Department of Homeland Security is a retired four-star general.

This is not what the Founding Fathers had in mind when they talked about civilian control over American foreign policy and national security policy. So this needs to be countered. This needs to be checked. I think it needs to be reversed, and this is going to be very difficult to do in the Trump administration.

The problem with regard to the CIA is the appointment of a former Tea Party congressman, Mike Pompeo from Kansas, to be the director of the CIA, and then his appointment of a Deputy Director in terms of Gina Haspel. Gina Haspel is not known to many people in the United States, but she was one of the leading actors, one of the leading forces for the conduct of torture and abuse throughout the War on Terror that was conceptualized and carried out by the White House and the Central Intelligence Agency since 2002, 2003. She was the one who sent the secret telegram to various secret locations around the world where the CIA was conducting this sadistic torture and abuse and had them destroy the torture tapes that documented this sadistic abuse. Pompeo just doesn't seem to have the background, the independence of thought, the kind of integrity that you need in a CIA director.

You've talked about famous whistleblowers Edward Snowden and Chelsea Manning and said that part of their problem, if that's the right word, was that they weren't focused enough in what they leaked. Can you talk about that?

I think it's important to have whistleblowers. My definition of a whistleblower is a very simple one: someone who's trying to expose a wrong, correct a wrong, to report any misuse of funds or transgressions or illegalities. I think in the cases of Snowden and Manning, they certainly did that. Snowden exposed information that involved unconstitutional behavior with regard to massive surveillance. Manning released a video that documented war crimes that were taking place in Iraq.

But in both the cases of Snowden and Manning, they conducted certain activities in releasing materials, some of which were sensitive, that had nothing to do with the problem they were focused on. In the case of Snowden, he released a lot of information that dealt with the legitimate collection, as far as I'm concerned, of intelligence, particularly with regard to China. His defense of that was he released this material to well-qualified journalists who knew what to publicize and what not to publicize.

In the case of Manning, she released hundreds of thousands of State Department cables that had nothing to do with war crimes whatsoever. I read a lot of these cables, and frankly, they demonstrated what a good job foreign service officers do around the world, that they were no threat to American national security. But it weakened [Snowden and Manning’s cases] and made their cases, to me, look less honorable in terms of their overall task and primary objective of whistleblowing.

A lot of liberal folks or moderate Democrats were optimistic on this front when Obama became president. But, in many ways, he was a bit of a disappointment here.

Actually, that's an understatement. I was someone who was extremely enthusiastic about Barack Obama, did a lot of work at the campaign offices and Maryland and the District of Columbia on behalf of Barack Obama, donated a lot of money to Barack Obama. But on some of these national security issues that we're talking about, frankly, he was a disaster.

He appointed too many military people to key positions, including a Marine general to the National Security Council as national security advisor. He kept Robert Gates on as secretary of defense when Gates should've been immediately cashiered. Then he went on this campaign essentially against whistleblowers and leakers using the Espionage Act more often than every president since the Espionage Act of 1917 was passed during World War I.

Obama really decimated the Office of the Inspector General to the extent now that [it] is essentially an institution that looks at accounting fraud and that kind of thing but not the serious problems of politicization of intelligence at the CIA.

What can we do today to protect whistleblowers?

The first thing that needs to be done is that the whistleblower laws that are on the books must be expanded to include people in the fields of national security and intelligence. Hillary Clinton said something outrageously incorrect during her campaign when she was confronted with a question about Edward Snowden.

She criticized Snowden for what he did and for leaving the country, saying, after all, he had whistleblower protection. Snowden had no protection whatsoever under the whistleblower laws, so the first thing that needs to be done is to expand those laws. I think the American Civil Liberties Union is working on that, and there are other oversight groups, GAP, for example, working on expanding those laws. So, this is what needs to be done.

Also, I think the mainstream media, and particularly the Washington Post, which has been so offensive in this area, has to have more respect for the whistleblowers who are out there and more editorial understanding of what it is a whistleblower is trying to do and why this is so important, not only to a free society, but to the freedom of the press and investigative journalism.

As I've said on many an occasion, you cannot have investigative journalism in this country if you continue to clamp down on whistleblowers. Legitimate whistleblowing is an important part of our democracy. James Madison understood that, Alexander Hamilton understood that, Jefferson understood it, and Benjamin Franklin, who said those people who are willing to trade liberty for security deserve neither, he certainly understood it. So we have to get back to basics.

[Editor's note: Melvin A. Goodman will read from and discuss Whistleblower at the CIA at East City Bookshop in Washington, DC, on Nov. 7th, from 6:30-7:30PM. Click here for more info.]