An Interview with Cat Sebastian

The romance writer talks queer narratives, self-care, and the allure of the 1960s. 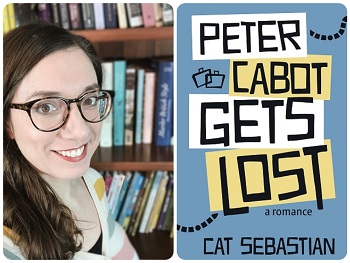 Before her writing career took off, Cat Sebastian practiced law and taught high school and college writing. Now a prolific author of 14 novels, she is best known for her queer historical romances. Sebastian’s newest series, The Cabots, is set in the relatively recent — and turbulent — 1960s.

You published The Cabots during the pandemic. What was the impetus behind Tommy Cabot Was Here and Peter Cabot Gets Lost?

With both books, I wanted to write something very low-stakes and gentle with minimal conflict. I wrote Peter Cabot Gets Lost during the first weeks of the pandemic when I absolutely could not focus on the book I was supposed to be drafting and yet couldn’t resign myself to doing nothing, either. And so I wrote a story that was filled with hope and sunshine (and pancakes and convertibles).

The 1960s is an unusual era in romance, right on the cusp of what is considered historical vs. contemporary. Why did you set The Cabots in that decade?

The short answer is that I’m fascinated by this era. The long answer is that the period of the late 50s and early 60s is a common setting for television period pieces: “Mad Men,” “The Marvelous Mrs. Maisel,” and “Call the Midwife,” just to name a few. But you’re so right that we don’t see it at all in historical romance. We don’t really see much of the 20th century, in general, in historical romance, presumably because of how we break up historical vs. contemporary in the genre, and maybe also because historical romance is firmly rooted in the 19th century these days. But [the 1960s] is a setting [that] audiences are familiar with and enjoy. It’s the end of one era and the beginning of something else. You have the Civil Rights Movement gaining momentum and the seedlings of the gay rights movement germinating in the background, but you still have a deeply conservative culture, and many groups are living with the aftermath of McCarthyism. It’s right on the cusp, a liminal space, and that makes it very appealing as a writer.

You’ve written historical romances across the LGBTQIA+ spectrum. What made you choose to tell queer historical stories?

Mainly, I wanted to write myself into the genre I love. Historical romance is my comfort reading, and I kept thinking that I’d like it even more if I saw more queer representation, and so (in a fit of hubris that I’d like to claim is totally out of character) I decided to just write some. Also, there’s this tendency, mainly among straight people, to assume that if they haven’t heard of queer people throughout history, then it must be either because queer people didn’t exist or because they were miserable. In my stories, I want to populate the past, albeit a fictional version, with people who get left out of a lot of traditional narratives.

I think almost all of my books involve people learning to take care of themselves, take care of their romantic partner, and also allow themselves to be taken care of. There’s something about acknowledging that you’re a being worthy of care that feels universal and important to me.

You’re a hybrid author of traditionally published and self-published books. What made you choose to work in both formats?

Traditional publishing is great for building an audience and gives me a chance to work with talented people who are experts in their field. I’ve learned so much from my editor, and I’ve also benefited from the work of the marketing and publicity teams and everyone else behind the scenes at Avon [an imprint of HarperCollins]. On the other hand, self-publishing allows me to write things that might have a more niche appeal and which traditional publishers might not be interested in. Being able to alternate between one style of book and the other is great for staying enthusiastic about whatever my current project is.

How did you become such an outspoken proponent of the romance genre?

Romance novels were my principal self-care when I was at a low point, and I’ve heard from so many readers and writers who have had the same experience. Sometimes, it’s really soothing and even healing to read about people being loved and valued for exactly who they are, and fundamentally, that’s what genre romance does.

Next summer, the follow-up to The Queer Principles of Kit Webb is coming out: The Perfect Crimes of Marian Hayes. It’s set in 1750s England and involves a couple that meets and falls in love via blackmail letters. The Missing Page [self-published, Jan. 2022] is the sequel to Hither, Page, where a spy and a country doctor team up to solve a decades-old mystery in 1948 England.