An Interview with Camille A. Collins

The writer/publicist talks punk rock, Southern California, and the joys of having a book-nerd brother. 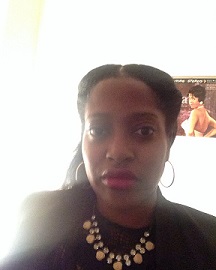 Camille A. Collins, a senior publicist for William Morrow in New York, is also an author. Her debut novel, The Exene Chronicles, finds 14-year-old Lia, one of the few African Americans in her San Diego neighborhood, feeling rudderless now that her best friend, Ryan, has vanished. She reaches for salvation in the form of Exene Cervenka, a famed L.A. punk rocker. Will connecting with Exene — and the edgy SoCal music scene — bring Lia any closer to finding Ryan and herself?

The punk-rock scene in 1980s Los Angeles figures heavily in The Exene Chronicles. What were the challenges of capturing that era, and how did you make it feel relevant to today’s YA readers?

The Exene Chronicles is a work of fiction, undergirded by the fact of my spending my middle-school days and first year of high school in the San Diego area, and by the fact that my friends and I spent all our time and money going to concerts of varying genre, but primarily punk, with a decided obsession with the L.A. punk band X. I relied on memory and a bit of research to capture the era. Besides that, I honestly didn’t try to make it relevant. I began this book several years ago when I was living in Brazil. I just considered it a passion project meant to capture the fun, discovery, and perplexity of a specific period of time — I had no idea if it would ever see the light of day.

The book’s protagonist, Lia, feels anchorless and reaches out to her idol with letters and poems. Why did you decide to have her use poetry?

I needed a vehicle for Lia to communicate with Exene. I thought having her mail off letters might be a bit cheesy and, besides, it would have just been words upon words. I needed a more condensed, lighter form of communication, so I chose poems. I like the fact that it was what she imagined she would say. If the setting was more contemporary, I might have had her send texts to a random number.

You’re a publicist in the book industry. Does “knowing how the sausage is made” influence your own writing — or, at least, your expectations about what getting published entails?

That’s a good question. Just enough to make me really grateful, I suppose. There is so much to learn about publishing even now. To understand the fine details of every aspect takes some doing. I’m grateful that I have a notion of how to publicize and promote a book. And knowing how many books get published these days, I realize that every opportunity, such as this [interview], are really great, so I appreciate them and don’t take them for granted.

What books did you grow up reading? And do you have much time to read for pleasure now?

I could weep at the second half of that question. Not nearly enough time to read for pleasure. I don’t watch much TV, but I still would like to watch less and read more. That’s a resolution, for sure. My older brother Michael is a poet and English professor. He’s a massive book nerd and scholar. I inherited the books he left behind after visits home and the books he gave me as gifts when I was still in middle and high school. Things like The Norton Anthology of Short Fiction and stories by Truman Capote. I remember he gave me a collection by Calvino and another of Borges. He was the first to teach me who James Joyce was (his high-school obsession) and to introduce me to the novel Cane by Jean Toomer, and to the writers of the Harlem Renaissance. He really was the first proper literature instructor I ever had. I can’t complain.

It’s really annoying when authors — right after publishing a book — are asked what’s next. So, what’s next?

Ha-ha, I’m ready for you! I have two other YA novels done — in the can and ready to be bought! (Massive hints.) Then there’s a collection of short stories set in East Africa, Brazil, and Arizona, all places I’ve lived; an almost finished play that needs revising; and ideas for a series of vignettes of some sort that haven’t quite yet taken shape.

Holly Smith is editor-in-chief of the Independent. Her punk-rock needs are all met by the Ramones and the Clash.

An Interview with Kim Adrian

The writer talks socks, reader takeaways, and the trickiness of crafting a totally honest memoir.