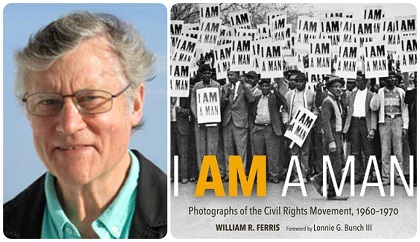 Bill Ferris grew up on a family farm near the Mississippi River. Blessed with a voracious academic appetite for folklore and the South, Ferris earned a doctorate at Penn, taught at Yale, co-founded the Center for Southern Folklore in Memphis, chaired the National Endowment for the Humanities, and taught at both Ole Miss and the University of North Carolina, the latter where he serves now as Joel R. Williamson Eminent Professor of History Emeritus.

Ferris has also written or edited 16 books, including the multimedia Voices of Mississippi, which won two Grammys. His latest is I Am a Man: Photographs of the Civil Rights Movement, 1960-1970, published by the University Press of Mississippi.

Professor, you are, among many other things, a superb photographer. What makes a great photograph?

A great photograph viscerally touches both the heart and the imagination. It inspires the viewer to reflect deeply about worlds associated with the image. Each time we see a great photograph, it takes us on that journey. Within the history of photography, images of the Civil Rights movement mark a distinct body of work. These photographs place us in the midst of violent confrontations between local whites and civil rights workers who risked their lives to engage in nonviolent civil disobedience as they fought for racial equity and justice. The photographs are vessels of truth that capture the courage of protestors who faced unimaginable violence and brutality, the quiet determination of elders, and the angry commitment of the young.

Who would not be touched by the sight of people attacked simply because they wished to vote, to eat, to study in a public facility? These photographs force the viewer to decide whether they are with or against unstoppable change. They are a catalyst for moving history forward, and they challenge daily lives at the grassroots level.

I’d never seen a lot of the pictures in I Am a Man. Tell me about one that felt like a real find and where you discovered it.

The photo of the 105-year-old former slave as she registers to vote in Greenville, Mississippi (on page 23), was taken in 1965 by Bruce Hilton, a United Methodist minister. We discovered this photograph in the Robert Langmuir Collection at Emory University, where the location of the image was listed as Greenville, South Carolina. We could find no record of a Bruce Hilton in that city, and Bobby Donaldson, a historian of African American Life and Culture at the University of South Carolina who did his Ph.D. at Emory, told us he suspected that the photo was taken in Greenville, Mississippi, rather than Greenville, South Carolina.

I asked our Chapel Hill neighbor Hodding Carter if he ever knew a Bruce Hilton during the 60s, when he lived in Greenville, Mississippi, and he immediately said yes. Hodding confirmed that the photograph was taken during Hilton’s work with Owen Brooks at the Delta Ministry. During that time, the Hilton family helped the Delta Ministry register 70,000 new Black voters and trained Black candidates to run for public office. While living in Greenville, the Hiltons found a bullet hole in their living room window one night and were later evicted when the Ku Klux Klan spread rumors that the couple were communists.

Bruce Hilton’s obituary notes that “it was in the South that he saw the worst side of humanity” and includes his reflections on that period of his life. “It was the first time we'd faced clear and present evil…Most of our lives, the evil we face is in shades of gray.”

Your book pictures a lynching victim, an effigy hanging from a noose, and several images of Klan rallies. Why do you feel it’s important for people to see these images now?

Racism is like an American cancer. It threatens our daily lives and our society. The violence captured in these photographs reminds us of the grim consequences of racism, and how and why racism explodes through nativist politics and white supremacy. Photographs of the American Civil Rights movement are visual monuments that stand the test of time. They are a powerful reminder that the past is never past, that lessons learned in one period — the decade of 1960-1970 — help us move forward in the global struggle for racial justice today.

By the close of the 1960s, the Civil Rights movement seemed to have met many of its goals. Yet, a half-century later, with the Black Lives Matter movement, it feels like we’re back where we started. Is all that progress an illusion?

It is not an illusion. The decade of the 1960s was a critical moment in our nation’s long struggle for racial equality, a struggle that spans over four centuries — from 1619 to the present. Martin Luther King’s dream that “one day even the state of Mississippi, a state sweltering with the heat of oppression, will be transformed into an oasis of freedom and justice” inspired courageous civil rights workers in the 1960s to secure the right to vote, and to study, eat, and sleep in recently desegregated public schools, restaurants, and hotels that were the backbone of our nation’s Jim Crow system of apartheid. Black and white civil rights workers captured in these photographs laid an important foundation that connects with and inspires Black Lives Matter.

You’ve taught entire generations of our best and brightest. How much do today’s college students know about sit-ins and Freedom Rides? Are some of these epochal events fading from memory?

Today’s college students are hungry for knowledge of the sit-ins and Freedom Rides of the 60s. As responsible educators, we must remind them that our nation’s racial history is the key that connects the murder of George Floyd with the racial violence and daily lives experienced by Black men and women before him. Photographs in I Am a Man animate the sacrifices of Black and white protestors in the 60s and help students better understand how, since 1619, race has defined our nation. They are a reminder for us and for future generations that we must continue the struggle for justice for all humankind. Today, that activism requires that we vigilantly protect voting rights and elect leaders who are committed to racial justice and equity.

An Interview with Karim Dimechkie