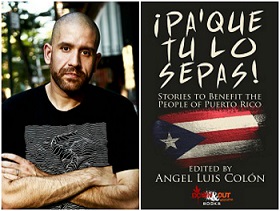 Writing about cultural identity, says crime writer and podcaster Angel Luis Colón, often feels like skipping through a minefield. Even the well-meaning can fall back on a clumsy stereotype or embrace a loaded term.

Not many realize that an understanding of identity involves a close reading of the history of racism and culture from both legislative and philosophical perspectives; the two often intertwine in their influence but are markedly different. And, as more disparate voices emerge, those perspectives necessarily adapt and grow.

America has often found itself in the throes of these essential debates, and the result of the 2016 election, in particular, has placed the focus on Latinx people and cultures. Even the devastation done to Puerto Rico by Hurricane Maria became a hotly divided political issue. In response, Colón has put together ¡Pa’Que Tu Lo Sepas!, an anthology comprised of works by Latinx authors, with the proceeds going to recovery efforts in Puerto Rico.

What are your thoughts on representation from WOC (writers of color) in American crime fiction? Has progress in publishing been made?

It's no secret that I yell A LOT about diversity in our scene. I’m rarely satisfied with what I see, and I am an immense opponent of the ghetto-ization of literary voices. We do not belong in specially built lanes for our voices to be heard; we need to be in the goddamn room and at the goddamn table.

When we’re separated that way, there tends to be a lack of priority — less money, effort, or promotion given to those projects. That lack of effort is rarely placed on the shoulders of publishers. It falls onto the writers, which, in turn, lowers their value. This is how you indoctrinate people into thinking media for a specific demographic is somehow “cheaper” than whatever is considered mainstream (spoiler: white dudes are considered mainstream).

I think we still have a lot of work to do when it comes to bringing more women and, especially, marginalized women into the genre. Even this project has left me a little disappointed. Yes, I brought in more than one woman to provide a story, but I don’t think I’ve done enough to bring varied voices to the table, and I’ll apologize for that.

A lot of critics of diversity use the idea of a checklist when these conversations spring up, but I don’t think of it that way. It’s not that we’re checking off every identity, but we must be thoughtful. If I’m claiming a project is Latinx but I’m ignoring my Afro-Latinx and queer-Latinx cousins, then what the hell am I doing this for? I should, of course, aim for the highest quality of work, but I can ask for that across the spectrum.

This is something I want to continue working on and should utterly own because a one-time anthology isn’t a solution — it’s merely a step. I also understand this kind of work is a minefield of contradictions and good intentions run afoul, but until the mechanism changes from the inside, this is what I can do with what power I have. I have to be thoughtful; there's no choice.

As for the industry, I remain suspicious. Like I mentioned, the system of oppression has a habit of finding ways to pen us into specific spaces that afford the illusion of belonging, while maintaining locked gates at the places we should be.

The regressive thinking is, “Well, Attica Locke got an award, that should make them happy,” and that’s bullshit. Attica is a phenomenal writer and should be celebrated, but celebrating a single writer of color means squat if you’re using her to ignore the literal hundreds of others right behind you. And I don’t mean to single Attica Locke out for any other reason than she recently crushed the universe of crime fiction. I love her writing and think she’s right up there with the absolute best in our genre.

I also need to mention writers like Kellye Garrett, who is absolutely killing it in the push to get more writers of color in front of readers. Her efforts are stupendous, and I am always awed by how much of herself she puts out there to boost other writers across the board. I genuinely count her as an inspiration and believe she sets the bar. She’s not a slouch in the writing department, either!

¡Pa’Que Tu Lo Sepas! reads as both intensely personal and political, like a shout against the current dramatic attempts to reduce and dehumanize Latinx people. You've mentioned the potential for future volumes in the series. Will you continue to work with Latinx writers, or expand it to other WOC and marginalized voices?

It’s 100 percent political and meant to be loud. Latinx, we can be loud, and we deserve to be. It would be remiss of me not to call out every writer in this collection: David Bowles, Hector Acosta, Hector Duarte Jr., Chantel Acevedo, Cina Pelayo, Désirée Zamarano, Jessica Laine, Richie Narvaez, Alex Segura, Carmen Jaramillo, and Christopher Novas. They killed this and were loud as hell. I love them for that.

This was very much meant to be a single project but, like I mentioned before, it bugged me that I didn’t get as many diverse voices as I could. So, yes, there is going to be another volume.

The current idea for the next volume will be to bring in more Afro-Latinx, more LGBTQIA+, and more women. Latinx is not a monolith, and I realize there is an immense potential to not only show this to readers, but to also provide a platform for new writers. That’s why there will be a short open submission period, to be announced soon, for the next project. I’m still going to reach out to established writers, but I’d like to see if we can find a few folks who can use that first publishing credit to get the ball rolling in their careers.

Full expansion may take time. I’d like to concentrate on Latinx voices as much as possible. I have the opportunity to work with a publisher in Down & Out Books that is willing to put this out into the world with absolutely no caveats or attempts to separate it from their slate of normal releases, so my writers get an opportunity to be in the exact same lane as every other writer being published in this stable. Much love to Eric Campbell, Lance Wright, the artists, and editors at Down & Out for their support.

That said, with expansion comes my inability to recognize aspects of diverse narratives by simple virtue of being me. If this continues, we might need guest editors to really help ensure I don’t go off-road. I grew up in the Bronx hanging out almost exclusively with Italian and Irish guys — I’m no expert on anything but loudmouth drunks with poetic souls and chips on their shoulders.

You've earned a rep as a ferocious editor. Was it intimidating to edit such outstanding writers for this anthology?

In other words: I’m a prick (I own it). At least, until this project. It’s funny; I went into ¡Pa’Que Tu Lo Sepas! knowing full well my reputation with some folks as an editor and decided to take a step back. For one, it felt wrong to be as hardcore as I can be for a project whose mission statement is to be as unapologetically Latinx as possible.

That meaning obviously differs writer to writer, so I couldn’t take a hard stance there. I could certainly provide notes and copy edit to the best of my ability, but I wanted to ensure my writers’ voices were their own and that their intent was never clouded by my intent (or, let’s be real, my ego).

To answer your real question: Yes. I respect these writers immensely, and being privileged to act as a sort of custodian, even with that wide berth, was very intimidating. My good fortune, though, was that these writers brought their A-game to this project and made the lift remarkably easy.

And shout out to Hector Acosta for providing me with a very important lesson during my editing process when he refused some of my changes in our initial run. He opened my eyes to an aspect of this project I hadn’t realized and strengthened it overall. So, editors: Sometimes it’s okay to listen to the writers!

An Interview with Justin Sayre

The novelist/performer discusses his writing process, his favorite operas, and capturing tween angst.