An Interview with Imbolo Mbue

The novelist talks inspiration, the Great Recession, and the importance of listening closely. 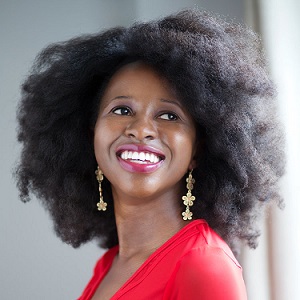 First-time novelists need thick skin and nerves of steel. Once the book is published, the real stress begins. Will it be reviewed? Will I want to read those reviews? Why do I keep having this dream about my teeth falling out in a bookstore?

Luckily for Imbolo Mbue, her new book, Behold the Dreamers, has quickly earned lots of attention and piles of positive reviews. The debut novel tells the story of already-struggling people further slammed by the financial collapse of 2008. A native of Cameroon, Mbue has lived in New York City for more than 10 years. She swapped emails with me earlier this month, just as her reading tour was passing through Washington.

You read at Busboys and Poets here recently in conversation with the DC chapter of the Young African Professionals network. How important is it to you go give back? To offer counsel and perhaps serve as an inspiration to others?

My novel was inspired in part by people (immigrants and citizens alike) who shared their stories with me, so I believe it’s now my turn to share my story with others. The people who told me their stories of struggling to achieve or hold onto their American dreams were in all likelihood not aware of what a tremendous gift they were giving me. I can’t know what effect hearing my story will have on a listener, but I believe it is a privilege for me to share it and allow the listener to use it in whatever positive manner they deem best.

Who has inspired you either personally or as a writer?

David Ebershoff, who was my editor for Behold the Dreamers, is someone who has inspired me as a writer. He is famous for having written The 19th Wife and The Danish Girl, but what most people don’t know is that he is also a legendary editor who has edited some of the best works of fiction and nonfiction in the past years. Having someone with his level of talent as my editor was one of the best parts of my publishing journey, as I learned a lot about the craft of fiction-writing from him. Thanks to him, Behold the Dreamers became the book it is.

As I understand it, the book came out 14 years to the day after you first put pen to paper. Were you relieved? Sad to let your characters go? Nervous about how you’d top this well-received book? All of the above?

I think I’m more in awe of what a journey it’s been, and how difficult and beautiful the journey has been. When I began writing 14 years ago, I didn’t give much thought to publication. And when I started writing this particular story five years ago, I never considered that it would one day become a novel.

The 2008 financial crisis was a subject that I suspect required a fair amount of research. How did you approach it and the subsequent writing?

The one advantage of writing a novel set around a recent crisis is that my memory of it is still fresh. Because I lost my job in the recession, I had a lot of time to read news accounts of the crisis — stories about people losing jobs and losing homes and marriages crumbling due to financial stress.

Reading such stories didn’t help me feel less anxious about finding a new job, but years later, it was instrumental in my writing about the anxiety of the characters in the novel. Most of the in-depth research I did on the financial crisis had to do with what happened behind the scenes at Lehman Brothers, and for that I read excerpts of the document prepared by the court-appointed examiner who investigated the bankruptcy.

How much of the work is autobiographical? Did you have models in mind for the couple, Jende Jonga and his wife, Neni?

Like Jende and Neni, I’m from the town of Limbe, Cameroon, and I also lived in Harlem for several years. That’s as autobiographical as it gets. While they weren’t modeled after a particular couple, they were inspired by real people — friends and acquaintances and strangers who I conversed with in public places.

Reviews have singled out your excellent use of dialogue. How do you capture the voices of your characters?

Listening attentively helped me a great deal in that area. I’m often tempted to interrupt, but I learned early on that to be a better writer, I had to resist that urge and give the speaker my undivided attention. It also helps that I was born with a good memory, so I’m able to recall not only the things people said, but also the particular ways they said it.