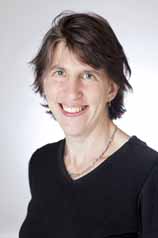 A dreamer and a doer, the Marquis de Lafayette held a special place in the heart of childless "Father of his Country" George Washington. And if President Obama cranes his neck just right in the White House, he can look out his window and see a reverential sculpture across the street in Lafayette Square. Laura Auricchio, author of the new The Marquis: Lafayette Reconsidered, helps us understand how and why presidents from Washington to Obama have been impacted by a French nobleman with a bit of money and a lot of panache.

Auricchio, a specialist in 18th-century French history and art, has been the recipient of major fellowships from the Fulbright Foundation, the Whiting Foundation, and Columbia University. She is currently dean of the School of Undergraduate Studies at the New School for Public Engagement. She'll be discussing her book at the National Portrait Gallery on November 7th.

Lafayette was one of the first in a tradition of statesmen far less popular in his native land — think Churchill in 1945 and Gorbachev in the age of Glasnost. Why was he so less revered in France? Did his reputation in either place — the fledgling U.S. or a France in revolutionary turmoil — surprise him?

When Lafayette landed in South Carolina in 1777, it was love at first sight: he adored America, and America adored him. His relationship with his native France was more complicated. During the French Revolution, people hoped that Lafayette might become France’s George Washington — the hero who could lead his nation to a new era of liberty — but circumstances made that impossible. With class warfare reaching a fevered pitch, brutal violence being meted out in the streets and, eventually, government-sponsored Terror tearing France apart, events spiraled out of control. Lafayette’s French reputation was one of the era’s many casualties.

I was surprised to learn in your book that Lafayette might well have been executed had he stayed in France around the time of the French Revolution. How had his position there deteriorated to that degree?

Lafayette was a man of steadfast principles and, during the French Revolution, that was a dangerous thing to be. The existing order was collapsing around him, but Lafayette remained consistent in his belief that France should reform, not abolish, its monarchy. That moderate position eventually became untenable. Reformists were purged from leadership roles, and any man in a position of authority could find himself subject to arrest and execution based on whichever revolutionary sentiments prevailed at that moment. On August 19, 1792, the Jacobin-led National Assembly accused Lafayette of treason. By the end of that day, Lafayette had abandoned his post as a commander in the French army and crossed the border into the Austrian Netherlands (modern-day Belgium). If he had stayed in France, he would almost certainly have been killed.

He was only 19 when he came to join America's Continental Army. Like Alexander Hamilton, did he benefit from Washington's predilection for surrounding himself with enthusiastic — perhaps a little sycophantic — pseudo-sons?

Lafayette was close to many of the Founding Fathers — Franklin, Jefferson, and Adams regularly brought their families to Monday dinners at Lafayette’s home in Paris — but no one had a bigger impact on his life than George Washington. Lafayette lost his father before he was 2 years old and saw Washington as the embodiment of honorable manhood. Washington, who had no son of his own, embraced the role. He advised, protected, and reassured the young Lafayette through his first military campaigns, welcomed him to Mount Vernon after the war ended, and exchanged thoughts on politics and policies throughout his life. Lafayette was immensely devoted to his “adoptive father,” and even went so far as to name his only son George Washington Lafayette.

I went to Mount Vernon in September and saw Washington's portrait of Lafayette displayed prominently in his home. The vast majority of other paintings were hunting and other pastoral scenes. What about Lafayette inspired such a public display of affection and respect from the usually stoic Washington?

Washington had never met anyone quite like Lafayette. Here was a wealthy French nobleman with no battlefield experience asking to be placed in command of a Continental Army regiment and wanting no pay for his services. At first, Washington wasn’t sure what to think of him. But it didn’t take long for Lafayette’s earnest zeal, his selfless dedication to the American cause, and his unflagging personal loyalty to win Washington over. They quickly developed a deep and lasting friendship.

It struck me while reading your book that Lafayette's rugged optimism was more "American" that the traditional view of dour, angst-ridden Frenchmen. Would you agree? Do you think his sensibilities were more American than French in many ways? Where, if anywhere, did he retain more typical French viewpoints?

Lafayette was something of an outsider at the court of Versailles. Although his ancestors had been ennobled for centuries and he had married into a family closely connected to the king, he had grown up in the rustic Auvergne region of south-central France, and his straightforward manner was ill-suited to a gilded world that privileged style over substance. Still, some of his views were very much those of a French nobleman. He placed great value on family honor and national pride. And, when revolution came to France, his first inclination was to shore up the power of the nobility. As he saw it, guaranteeing the privileges of a strong noble class was the best way to protect the liberty of the people from an over-reaching king.

Lafayette supported democracy for Americans, but had a different viewpoint for the French. Can you describe the difference?

Surprising though it may seem, Lafayette actively opposed the idea of establishing an American-style republic in his native France. In America, he thought, all things were possible; it was a new country where a new and virtuous form of government could take root and flourish. But he believed that the French monarchy was so fully woven into the fabric of society that the two couldn’t be separated without causing grievous damage. In his view, the excesses of the French Revolution served as gruesome proof that he was right.