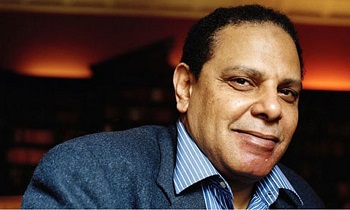 In Alaa Al-Aswany’s The Automobile Club of Egypt, many of those working in the titular club face a terrible choice: Do they continue to live safely with a boot on their neck, or do they risk what little they have for the right to live freely without fear? Whatever their decisions, characters like Alku, Kamel, Mahmud, and Mr. Wright will long outlive these pages.

Al-Aswany, who is also author of The Yacoubian Building — the bestselling book in the Arab world for five years — has received numerous international awards and was named by the London Times as one of the best 50 authors translated into English in the last 50 years.

We recently spoke on the phone which, I might add, is quite different from an ordinary email interview.

You take a few twists and turns at the beginning of the book, starting with your beach house in modern-day Egypt, and the Mannheim, Germany, of Karl Benz before turning to Egypt under British occupation, where the story is mostly set. Why the subterfuge?

Usually I do that and for the other novels, too, because it is much more than the drama line and I want to create a world. Also, I was accordingly interested in formulating the invention of the car and how it arrived in Egypt before it happened in the Automobile Club. This is something that I always do.

Characters cease to be imaginary. I create the characters and they began to exist, and I cannot begin the writing without feeling they are living characters. Perhaps I went a little far, but I imagined that they came to me. It is a way to make three-voice narration and, for this novel, it was a convenient way to make this come true.

Your characters were very hard to leave.

This is the most wonderful thing that any novelist can hear. When you finish a novel that you want to read more [of], it means the book is successful.

The Automobile Club is the nexus of the story; life flows from this gentlemen’s club and snakes through the neighborhoods of Cairo. The club is its own planet with a complete ecology. Did you craft the nexus and then the characters? Or vice versa?

Characters first; the details come and then characters began to exist. In the beginning, I invent and then become the follower on the screen of my imagination. I simply describe what they do and lose all control. And then I don’t take any of the responsibility for the way they behave.

You and Mark Twain have something in common. Twain, in his book Pudd’nhead Wilson, said that he had started the book in one direction and it went in another.

Not many novelists like to talk about the way they write — but the ones that do admit that characters come alive and they lose control, Honoré de Balzac is another that comes to mine.

In In the Language of Miracles, a recently published book by an Egyptian-American writer, the author describes the Egyptian personality as a complacent one, one that sits and waits for miracles. Your characters, however, don’t seem to concern themselves with possibilities; they are far too pragmatic. Do you believe the Egyptian character has changed over time? What about since the Arab Spring?

I did not read the book but read articles about it, and it’s just a different context, dealing with something different. I don’t like to generalize but, of course, there is an Egyptian way to see the world and it is very much related to their history. We have been living under dictatorship for 60 years.

One thing I liked about the [Egyptian] revolution is that it is from a new generation with zero tolerance for dictatorship, that fought hard to get democracy, and this generation is not even understood by its own parents. This is one reason that I am very optimistic, because 60 percent of Egyptians are under the age of 40. Youth will keep it up until they are older and will work until democracy comes.

I was in Tahir Square every day, and these were the most wonderful days of my life, unbelievable moments in these 18 days. Sometimes I felt that I was dreaming and woke with another aspect of the Egyptian people. I learned the meaning of “the people,” the meaning of the people was in that square. Two million people were living with the feeling of a family, eating, facing death, drinking, and singing.

Will you write about the experience?

I am already working on a new novel, and it is about the revolution.

Of course, everyone ought to know that no culture is a monolith, though it’s easy to think this way. But what this reader remembers about a visit to Egypt some time ago is the overwhelming and welcoming kindness of the people. What is it that kindness has in common with brutality? Why does one seem to serve the other so well?

One great rule of literature is to teach us that we can be different in culture and skin color but we are basically human beings, and you will never think of the character as a race but as a human being. A novel should be able to be translated, and any literature that cannot be translated is poor literature. I write for all human beings, touchable as human beings who understand each other.

Egyptians have the reputation of having an efficient sense of humor and much more peaceful than other Arab peoples. Why? Because we have had a terrible history of dictatorship and our sense of humor was a way to make fun and to defend ourselves. We have the best jokes. We try to treat people kindly to be nice and especially with foreigners.

We began a peaceful revolution and then began to be killed, shot at by snipers. Violence for Egyptians is a reaction, a temporary one. As soon as there is a fair state, Egyptians will no longer be violent.

In the book, the Englishman, Mr. Wright, the general manager of the club, describes Arabic as a “barren classical language.” What is it that Wright doesn’t understand about Egypt, about himself? Men who do the most harm never seem to understand their acts or themselves. Why do we give them this excuse?

He doesn’t use his logic even if it is terrible and he is a terrible racist. It’s the way this man thinks and he tries to justify his racism with facts that are not facts at all. I was very happy that his daughter made him feel very stupid. My joke is to leave them to themselves.

Arabic is less practical than English but much more descriptive than English. I could write in French or Spanish, but the text of a novel is much more profound than the meaning of the words; you have an underneath text that is covering something that is not written but does exist, and you cannot do that unless you write in your mother language.

Fawzy and Mahmud, two roguish young Egyptians, like lions who have only recently left the pride, get up to some “real adventure.” Still, Mahmud is somewhat chastened by his religion, by what he knows is right. Imagine for a moment that they didn’t grow up in a place where a prayer call is issued five times per day. What would become of these two without the constraint of religion? Do you believe the presence of religion in their society provides some caution?

The religion is a very important factor in the Egyptian culture…and often positive, but sometimes it has a very negative effect on our attitude. And religion and politics are a catastrophically bad mix. Mahmud is slightly retarded but kind, and he would have felt guilty with or without religion because he knows that he isn’t doing the right thing and is pushed by his friend.

The sexual relationship is much more profound than it looks and attractive to men in literature because apart from the desire and taboo, we make love to other partners for many reasons and with different motivation. Sometimes because a man is desperate or looks for a mother or wants someone to try and help him forget. The depth of these relationships even with a foreign old lady is much more profound than it seems.

Mahmud begins an affair and projects onto all women; sex has turned women into constituent parts. Is this only true in his particular situation or is it a little true for all men?

When you make love to a woman, you have a new experience and you know them much better, and in this very intimate moment, is hidden a very human moment. I was interested in exploring and explaining the sexual life of the characters.

You bring more to each sexual act because of the ones before, and the point is that literature is not a tool of judgment, it is not written to judge other people but to understand them. A young guy is having an affair with an old woman. The example is Mahmud and Rosa, and the role of literature is to teach us to accept that there are things we should understand that are absolutely outside of stereotypical classifications. In literature, we can learn to respect many things about all human relations without any reservations.

Most of the employees of the Automobile Club do not or cannot imagine vengeance; they only fear punishment. They have helped enslave themselves and want no dissent. Either fear is the greatest motivator of all or safety/comfort is truly a prize. Which would you like for your reader to believe?

This is a dictator’s formula. You would either like to be secure or talk about freedom, which will cause you to lose everything. Most people are not heroes. People will choose to shut their mouths and take care of their children. Even in the 20th century, dictatorships have been allowed to flourish for decades but people work to give freedom to their children and they believe that this freedom is much more important than their dignity and this has always been a part of human thinking. The majority would stay away from troubles and see what might happen.

And we must also understand that many people want freedom but are not able to pay the price for it.

Please tell this reader, privately, who is the murderer?