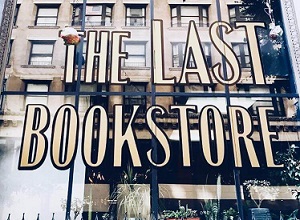 “One must look for one thing only, to find many…”

LOS ANGELES. It was coming down hard, just like Albert Hammond sang in his 1972 hit, “It Never Rains in Southern California.”

“It pours,” crooned the prolific songwriter from Gibraltar. “Man, it pours.”

As it did last month in downtown L.A. where the desperately homeless waltz with the oblivious gentry and the deliberately hip; rain coming down in buckets as I waited at the corner of Spring and 5th streets for the Last Bookstore to open for the day.

The used-book store operates on the first and second floors of an Art Deco landmark built as a bank in 1914, the year Joyce published Dubliners. The vault is still there, holding crime and mystery titles, and 22,000 square feet of floor space also holds several attics’ worth of vinyl LPs.

A doorman allowed me to sit in the vestibule while waiting for the doors to open, my bench near a side entrance where people bring suitcases stuffed with books to sell. It reminded me of the good folks who bring me trunk loads of junk and treasure, knowing I distribute books to prisons, hospitals, and nursing homes. But instead of gratitude for finding a good home for collections that had become clutter (usually after the death of a parent), all the L.A. folks wanted was money.

Once inside, I made for the fiction shelves that owner Josh Spencer has divided into two categories: literature and fiction. The distance between those poles is not measured by the unmeasurable (i.e., what is literature and what is no more than a made-up, possibly entertaining yarn).

All an author has to do to cross the divide is die!

Yep, kick the bucket — as the Persian poet Farhad Ebrahimi did last week — and you leap from the pedestrian to the Big L.

A less arduous arrival is described in Larry McMurtry’s 1972 classic, All My Friends are Going to Be Strangers.

In the story, protagonist Danny Deck has just published his first novel. His friend, the ping-pong-playing writer Wu (whose manuscript “was a kind of literary Great Wall. It filled all the shelves of [his] pantry”) congratulates Deck.

I was immediately warmed by the line, a big moment for me when I first read it several decades ago; moved enough to copy it in a notebook — WELCOME TO LITERATURE! — and drive to Archer City, Texas, over the summer of 2000 to ask McMurtry about it.

The Pulitzer, Guggenheim, and Oscar winner did not remember that I’d written him asking for a few moments of his time, to which he’d cordially agreed. And, begrimed with book dust and sweat from working his bookstore’s stacks in the Lone Star heat, he simply shrugged when I quoted the great line from Wu.

Larry did liven up a bit when I asked which shade of green glowed brighter: Sexual envy or literary envy.

Without pause, he said, “Literary, by far.”

My McMurtry phase had long passed before my most recent visit to L.A. (where an out-of-print and soon-to-die Fitzgerald once went looking for his own books in old shops), and I walked out of the rain into the feast in search of the Argentinean novelist Ricardo Piglia (1940-2017).

Said the New Yorker in 2017, a year before Restless Books of Brooklyn, NY, released the first English translations of Piglia’s diaries: “He often wrote about displaced loners, failed geniuses, persuasive paranoiacs, and conspirators — many of them...washed ashore by the forces of history and surrounded by intense, loyal admirers.”

Piglia has come to be seen as a possible (and likely) influence on the better-known South American writer Roberto Bolaño (1953-2003), whose tales of young rebels as besotted by poetry as kids in New York and London were of punk in the late ’70s have posthumously charmed the literary world.

Alas, no Piglia. A helpful employee (of which the bookstore has about 50, most of them reading when they are not shelving or assisting a customer) had not heard of Piglia, identifying himself as “a Cortazar man.”

But, continuing to graze the cemetery shelves, I happened upon a hero of Piglia’s just a few authors ahead of him: Cesare Pavese.

And so it is the suicide Pavese (literary prizes not enough to overcome his romantic disappointments) that I am now reading, both his masterpiece — The Moon and the Bonfires — and his own diary, The Burning Brand. Both of which I learned about by reading Piglia, who mentions the diaries often in his own journals.

Which is why, as someone with an awful sense of direction, I read books the way other people consult maps.

I come in from the rain looking for one thing. And find another.