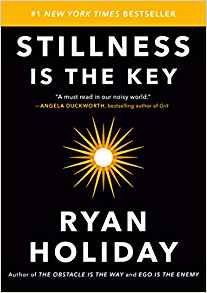 Every once in a while, a young person enters the arena and demonstrates peak performance and staying power that astounds the multitudes. In her early 20s, as a recording artist and then on Broadway, Barbra Streisand emerged as the premier female singer/performer in the world. By 26, Mark Zuckerberg’s Facebook had reached a billion users, with billions more to come. At 30, Tiger Woods had won eight of his current 15 majors.

To this list of dazzling young high achievers, add Ryan Holiday, who, at 32, through his trilogy — The Obstacle Is the Way (2014), Ego Is the Enemy (2016), and Stillness Is the Key (2019) — has established himself as a world-class purveyor of pristine wisdom for current and future generations.

Like Messrs. Gates, Jobs, and Dell, Holiday dropped out of college at 19, with a level of brilliance and ambition that apparently could not be held back by the slog of degree requirements. Like autodidacts Ben Franklin, Abraham Lincoln, and Harry Truman, he educated himself largely through voracious reading, as demonstrated by his books’ sage pearls supported by spot-on passages from ancient Greek and Asian philosophers, the Bible, other holy books, and life lessons from a variety of leaders.

His latest book, Stillness Is the Key, is the ideal gift for every deep-thinking person on one’s Christmas list. Like the philosophical predecessors on whose shoulders he stands, Holiday sees mind, spirit, and body as “a holy trinity, with each part dependent on the others.” Thus, he divides the book into those three parts and crafts the stool’s three legs under the seat of “stillness.”

What, exactly, is stillness? It’s when a person can “be steady while the world spins around him”; “when no noise reaches” a person’s mind as he takes on challenges. It’s what “aims the archer’s arrow” and is “the key that unlocks the insights of genius.”

Holiday aims his archer’s arrow at a bull’s-eye story from American history that epitomizes the concept of stillness. Toward the end of the Civil War’s first year — after studying military history from books he’d checked out from the Library of Congress and then reflecting on how the lessons learned from his reading could be applied to the task at hand — Abraham Lincoln gathered his generals and political advisors together and told them that ultimate victory hinged on the Union army’s taking control of Vicksburg, Mississippi.

His colleagues’ response: “What? Not Richmond? Not Atlanta?”

Lincoln informed his colleagues that by achieving his chosen objective, their forces would be able to take control of the Mississippi River and also the rail lines crisscrossing the South, thereby positioning themselves to cut the Confederacy in two. He then joined his conclusion to a metaphor he’d derived from his time in solitude: “Vicksburg is the key, and the war can never be brought to a close until that key is in our pocket.”

With that story setting the stage, Holiday explains how it encapsulates his latest book’s theme: “In those battles, in that war, stillness is the river and the railroad junction through which so much depends.” In other words, it’s the throughway necessary to traverse before one can achieve a sense of inner peace, live a virtuous life, and come up with sound approaches for overcoming obstacles.

How best to position the mind for stillness, according to Holiday? Have the iron discipline necessary to prevent it from running on rabbit trails of distraction; maximize the present; rigorously restrict one’s intake of information; find a mantra that declutters the mind; slow down, relax, and think in solitude; journal often and “feel the wisdom flow through your fingertips onto the page”; spend time in silence; read books and find mentors to expand wisdom; gain authentic confidence from experience, not false confidence fueled by ego; and work to perfect one’s form and process without obsessing over ultimate outcomes.

Where can a stillness be found that activates the soul? In a state of mind disconnected from “the unchecked pursuit of more”; in daily living marked by the “moral and civic excellence” known as “virtue”; in an emotional condition healed from childhood wounds; in maintaining self-control and turning from temptation; in knowing that one has “enough”; in a deep appreciation for nature’s beauty; in full acquiescence to a Higher Power; in loving relationships that nurture enlightenment; in preventing anger from controlling one’s behavior; and in recognizing that all living things are interconnected and necessary.

Last, but not least, how does the body attain stillness? Through a healthy balance of “flat-out work and restorative leisure”; the self-control to say “no” to offers that would overextend; a steady diet of walks where nature is fully imbibed; a routine that brings order to one’s waking hours; a disconnect from material possessions; prioritizing solitude; the rejection of workaholism; a commitment to sufficient sleep; a hobby that challenges and relaxes; not spending significant time on mindless escapism; and acting courageously and unselfishly when the need arises.

These tenets for best practices in the guiding of mind, spirit, and body are the subjects of chapters in Stillness Is the Key, all of them bolstered by the wise teachings of esteemed philosophers like Seneca, Marcus Aurelius, and Tolstoy; Scripture; and life lessons from political leaders like Lincoln, Churchill, and Eisenhower, and even sports figures like Russell Westbrook and Sadaharu Oh.

In only 261 pages of text, Holiday lays out a philosophy of life that rings true in every sentence. The book’s length and sequence are sublime. How a 32-year-old can create such a comprehensive, integrated circuit of wisdom is as miraculous as the supreme excellence displayed by the young Streisand, Zuckerberg, and Woods.

In his introduction, Holiday says his book is a call “not only for possessing stillness, but for radiating it outward — like the sun — for a world that needs light more than ever.”

Stillness Is the Key radiates the promise of its title. Though pursuing daily living in accordance with the book’s teachings is somewhere north of difficult, the wisest people have found ways to do it. Their stories, as shared by Holiday, can become the stories of anyone who commits to executing the game plan in this easily understandable playbook.

Holiday is smart enough to know that he’s merely a 21st-century channel for the important thinkers and doers who preceded him. The book’s final paragraph, in the author’s acknowledgements, demonstrates his rare and admirable humility:

“My final and most serious gratitude goes out to the thinkers and philosophers whose ideas make up this book. It would not have been possible without them, but more important, their insights and writing have made my life better. I’m grateful too to the heroes (and villains) in the stories written here, as their all-too-human successes and failures both inspire and caution anyone in search of happiness, excellence, and stillness. My own search is nowhere near complete, but their example has helped me make a few inches on a journey that — God(s) willing — is only just beginning.”

Millennials in need of a peer philosopher have one in Ryan Holiday, whose trilogy of playbooks about overcoming obstacles, sublimating the ego, and, most importantly, finding stillness, is truly a Vicksburg-like key to it all.