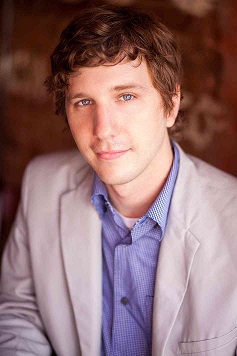 Kirkus and Time Out NY compared Kristopher Jansma’s 2013 debut novel, The Unchangeable Spots of Leopards, to the work of Fitzgerald and Salinger. In his new release, Why We Came to the City, five college friends shape their future against the high stakes of Manhattan, relationships, love, and ill fate. Sara and George are starting a life together, Jacob is struggling to be a poet in a corporate world, and William is in love with Irene, who is battling cancer.

The first part of the novel begins at a party, where all that applies to a group of 20-somethings is endless nights out and making enough money to foot the bar tab at the end of it: We said let our affairs be endless and convoluted; let our bank accounts be overdrawn and our benefits be reduced. Take our Social Security contributions and let it go bankrupt. We’d been bankrupt since we’d left home; we’d secure our own society.

The second half begins when the shine wears off. When the rent creeps up, and the walls become claustrophobic. When age starts to design new ideas for our future, and new perspective on the past: Doctors prescribed things to help us sleep, smile, function. We were afraid to go on vacation because we didn’t know if we could take coming back. It was time.

Each character attempts to navigate their place in the world after one of them fails to defy the odds. Left with their individual grief, we watch as they forge a path toward discovering what’s next.

Your younger sister had terminal cancer when you were first living in New York City, and several elements of that time in your life were characterized in the book. You wrote an essay several years back about how time and duty keep on moving amidst the universal death that is all around us. What was the most imperative perspective you took from that experience?

I’ve been figuring out more and more over the years since it happened. I think the biggest thing that found its way into the book was this idea the characters reflect that because they’re young and generally good, hardworking people, they have this sense of immortality. Their lives are unquestionably supposed to go along a certain self-imagined trajectory. My sister got sick when she was 21 years old. There wasn’t any explanation for what happened, and it was incredibly difficult for all of us. My wife and I were 24 years old at the time, and we spent five months taking her to doctors’ appointments and medical treatments. It changed my life — she had such a short time, and when I was writing her eulogy and looking at all these photos, I realized that she had already traveled the world. She was a ballerina, and she danced in China and performed with some of the great dancers of her generation. It reminded me that you have write like you’re running out of time. You can’t keep waiting for opportunity to come around.

Your characters seem to move in a pack, with William circling around the outside. Describe that dynamic a little bit.

It’s an insular group, which is my experience of what college relationships can be like. Your college friends instantly become like a new family, and you wind up having fewer external friends. In the book, this happens much to the frustration of Sara, who is always trying to bring new people in, while Jacob and George are trying to keep people out. William also attended college with the group, but they don’t remember him as well, although he remembers them as this unit. I wanted to show where their relationship came from, but that after about five years of being in the city, they’re really starting to hold each other back. All of this overprotective behavior — not allowing other people to make friends outside the group — began to stifle their growth. William just happens to fall in with Irene at the right time when she’s open to it.

Each character — Sara, George, William, Irene, and Jacob — has a particular weakness. For George, it’s alcohol; for Jacob, it’s cynicism; for Irene, it’s avoidance. At the same time, this group is much like other close groups of friends, in that they ignore one another’s flaws, and move in a flock, as if suspended by one another’s strengths. Talk a little bit about how you develop character layers and weave them together into relationships.

I didn’t start with any pre-conceived notion about how they would balance each other out. But as I began thinking about how they would complement each other, but also enable each other — they all more or less turn a blind eye toward George’s drinking — even Sara. Jacob is cynical, but they all accept that as part of his character, the malcontent of the bunch. Sara is the mother figure — she’s the organizer and keeps everybody in line. Irene is a wild card, she has her secrets, and everyone has learned what they can and can’t know about her past. Her mystery and unknown past actually inspires a lot of the other characters. William ends up with Jacob and George for a night out on the town, and when Jacob and George get a little out of control, William steps in to manage the situation, endearing him to the group.

Irene runs away from death a bit. What made you decide to give her that sort of defiance?

Something that makes Irene different from the others is that she’s not a friend from college — she got to know them as a bit of an outsider at first, and sort of makes everything for herself. She’s an artist who uses found items for her art, and her whole identity is developed as she goes along. Something that comes a little later into the story is that she represents the ability to reinvent and change the path that she’s on in any circumstance. She changes course based on what suits her.

New York is a defining city. It’s the most iconic place to be simultaneously anonymous and on top of the world. Is that why you chose it as the backdrop to the novel?

I chose NYC partly because that’s where I’ve lived these past several years. There are certain details that are uniquely New York, but a lot of the function the city serves in the book could be true of other big cities as well. It’s sort of the ultimate testing ground where you come with all these hopes and ambitions, and you have to learn a whole new way of doing everything, especially against the competition. The city can often be a massive obstacle course in different ways — it can be this wonderful place where even just being there physically is an inspiration and provides a certain energy. When I first moved there in 2003 for graduate school, I didn’t like it all that much, but over time, I grew to love it. Just to be able to walk down the street and see the height and breadth of the city. Even when things aren’t going well, at least they aren’t going well in one of the greatest places.

There’s this line toward the end of the book, where Sara declares her fear of the future — its wide expanse of time, and how to fill it. Is that something you try to characterize in the book because, as we look at death and the perspective it provides, we also have to look at how to fill our days with the most essential and urgent desires?

I think that’s a big question for all the characters. Sara has been fixated on getting this life off the ground with George, and after the wedding — they grapple with the “what next” aspect when the shine wears off. We all have a tendency to focus on the present or the immediate future because you can’t get too far ahead of yourself. I think Sara is starting to realize that she has to be able to think about things in a larger context within a bigger timeline than before. By the end of the book, she and George aren’t in New York anymore, and she’s in a job she didn’t set out to do, struggling with getting back to where she wanted to be. I think a lot of us find ourselves in that position at one point or another.

The introduction to Part I, Part II, and the final closing passages of the book encompass a thousand elements of what every single person feels at one point or another at various high and low points in life’s passages. “If only we could make more time, more money, more patience; have better sex, better coffee, boots that didn’t leak…” You crystalize the angst, the ambition, the terror, and the hope in such a collective way. Did you draw all of that from personal experience, observation, or both?

I had written a piece — it was originally a standalone story. I had this same idea that I wanted to write about what it was like to be starting out in the city. A lot of this came from my life or from the experiences of our friends. My wife and I have friends that we came to New York with from college, and friends from her first job. Everyone was underpaid and overworked. We called them the “trench buddies” — they all weathered this period of battering it out together. Some of us are still there, and many people went on to other places. But everyone had that shared experience of being young and special and hopeful. The other section is “Why we Left the City” — and once the book came together, I felt that I needed to dissect both why we came, and also why we decided to leave — that arc of change that happens as we go from early 20-something to mid-30-somethings when the city walls have a whole different appeal. Leaving that life is simultaneously a tragedy and a relief. “The City That Is” at the end of the book represents this notion of what will always be there, moving along as all of the people who move in and out, come and go.

An Interview with Audrey Magee

Audrey Magee worked for 12 years as a journalist for the Times, the Irish Times, and the Guardian. Here she discusses The Undertaking, her masterful debut novel.