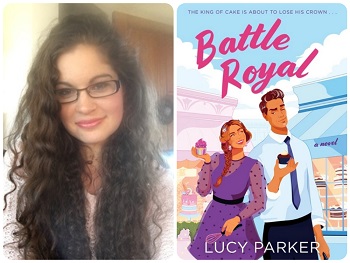 Ever since Carina Press published Act Like It, Lucy Parker’s first book set in the theater world, the romance author’s fans have grown legion. It’s easy to see why. In her books, Parker pairs keen observations about modern London life with a quirky sense of humor and spicy language. Her latest, Battle Royal, is the first in a new series centered around the monarchy.

As a New Zealander, what made you choose to set your books in England? And how do you get the London theater scene, language, and culture so right?

I have family in England, and London is easily one of my favorite cities in the world. You could shut your eyes, point at a map, and spend days just walking. Around every corner, in the most random little mews, you will find gorgeous architectural details and quirky bits of history. There’s a unique, vibrant vibe throughout the city. I doubt it can be fully captured in words, but I’m really happy people can feel immersed in the world of my stories. I also love the countryside, which makes an appearance as a setting in many of my books. Some of my cousins used to live in a country village straight out of Agatha Christie or “Midsomer Murders” — fortunately, minus the enormous body count. (If the villagers were constantly being impaled with pitchforks or crushed by enormous wheels of cheese, it was kept very quiet.) Every book tends to require its own elements of specialized research, which is fascinating to me. Prep for Making Up stands out as a favorite in that respect, with the heroine being a circus artist and the hero a special-effects-makeup artist.

In Battle Royal, you portray a contentious clash between two pastry chefs vying for the royal-wedding-cake commission. What was the impetus behind the story?

The heroine loves all things pretty, glittery, and magical. Her bakery in Notting Hill is decorated as an enchanted forest and is a haven of delicious scents, sights, and treats. I’d love to own it myself but creating it in fictional form was a far better option. I’ve always enjoyed baking and cooking romances, and I could see these two in my head — the stern judge on a televised baking show and the popular contestant who catches him completely off guard, even if it takes him a while to admit it! By the time the main narrative of the story begins, they have rival businesses on the same street and are both contracted as judges on the show, so are on equal footing with a similar goal. It’s that similarity which drives the story. These are two people with very opposite temperaments and tastes on the surface, but fundamentally they’re extremely alike and exactly what the other needs.

What made you shift gears from the theater world to the world of royalty? And do you find yourself writing differently — in terms of style or voice — in the two series?

I love the theater world so much, and I do think it lends itself well as a setting for contemporary romance. It’s like a little microcosm of the wider world, with so many different occupations, personalities, and passions all coming together under one roof. The Palace Insiders series is royals-adjacent in that none of the main characters are royal themselves, but their occupations do cross paths with the (fictional) royal family. I really wanted to write a romance between rival bakery owners, and when I thought about the ultimate contract they would be competing for, the first thing that came to mind was a royal wedding cake. In terms of writing style, I try to keep learning, and my main goal with every book is to keep growing as a writer. But I think and hope my voice itself will always remain fairly consistent. I never want to look back on my work and not fully hear or see myself in it.

Do you work with a germ of a plot or a single character when you start a book?

Honestly, that initial idea and plotting stage is one of the most difficult parts of the process for me. I think I often start with characters first and then find the setting in which to place them, but it does vary. With Act Like It, for instance, it was very much a spark of an idea about the awkwardness in dating and breaking up with a co-star when you’re still playing lovers at work. With Battle Royal, Dominic and Sylvie emerged as characters, and their history and future developed around them. As a writer, I’m definitely a “pantser.” I always write the first sentence of the book and then create a very broad outline, but I never know every detail before I start.

Do you have a core set of values that you explore in your books?

I think probably a sense of belonging and connection and finding the people and places that make you feel happy, secure, and safe to be who you are and to do the things you love. My heroines and heroes find family in each other and in the other people they love. Wherever there’s love, in all its forms, there’s family.

The second book in the Palace Insiders series will feature Pet De Vere, the younger sister of the hero in Battle Royal. Exuberant and bubbly, with a passion for vintage clothing and a very kind heart, Pet is a woman with a painful past who tries to see the world in the best light possible. She’s a bit of a trouble-magnet, so she’s both a curse and the ultimate blessing to a hero with a strong protective streak! I also have a sixth book in the London Celebrities series, which sees Charlie Ford-Griffin, younger brother of The Austen Playbook’s Griff, fall in love with shy author Allegra Hawthorne.

Keira Soleore writes for ALA Booklist, BookPage, Foreword Reviews, and the International Examiner.

Wendy Coakley-Thompson’s Q&A with the author of Pure.