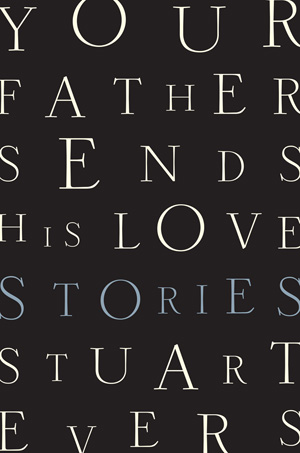 Fine, I’ll admit it: I start most books by flipping to the end to check the acknowledgements. I like to see the people and sources — if any — the author thanks; it’s a shorthand way of contextualizing a book. It’s the same work, really, that the jacket flaps do, but with less filter.

But flipping to the back of Stuart Evers’ new short-story collection, Your Father Sends His Love, brought me up short. Instead of landing in the acknowledgements, I found myself reading the last lines on the collection’s last page, the conclusion of a story titled, “Live from the Palladium”: “‘I’m a proctologist,’ I say. ‘That’s right,’ she says. ‘My son, the proctologist.’”

Needless to say, I skipped the acknowledgements and went straight back to the beginning, suddenly curious to find out just what kind of book this was.

It turned out to be a question I asked throughout this fascinating, funny, and occasionally frustrating book.

It’s a book of short stories, certainly, rigorously oriented around a central theme of fathers and sons. But the “proctologist” lines had me worried that it would take on this theme in some off-key, jokey manner, which the book absolutely does not. There’s humor throughout, but most often of a subdued, studied sort, as is literally the case in the story I quoted, wherein a son achingly researches the life and work of his departed father, a famous comedian.

“You can depend on a joke,” his mother says early on in the story, “a joke is always happening.” But the beauty of this story is to show how humor can fail people, too, and at the most crucial moments. When the son finally takes the stage in a lonely club to try out his own routine, the feeling the reader has is exactly the same feeling the people watching him have: It’s horrifying, it’s impossible to look away.

Many stories in the book make it hard to look away, although, unlike the protagonist of “Live at the Palladium,” it’s not because Evers is failing miserably. Rather, it’s because he often succeeds so well at portraying the haunting inner lives of characters who may not necessarily want all their secrets revealed.

In the collection’s beautiful opening story, “Lakelands,” a young man reminisces about coming out to his father and the enraged aftermath that ensues. Evers turns tables on the usual contours of such a narrative: In this case, the father’s not angry at his son — “He was a good, good man,” the son says, and we believe him — but rather at the locals who beat his son so severely he wound up in a hospital for two weeks. Then, at the end, Evers turns the tables again, giving us new information that makes us wonder if we know the whole story.

It’s a frequent theme across the book, one abetted by Evers’ flat style that favors percussive fragments: “There was a conversation there,” he writes at one point, “Something to say. A long, involved conversation. One that mattered. One of us just needed to ask: do you think you could?”

And though the immediate topic is whether either of the two old friends in a bar could ever have been brave enough to take another man’s life, the real question the story asks here is whether either of these two men can address the unspoken topic of their meeting, the fact that one of them has suffered the death of his only son at an incredibly young age.

The story’s titled “Something Else to Say,” and that’s precisely what the two men spend their entire time together trying to find. The story should be haunting and it fitfully is, but the humor here, even if it’s meant to be tinny — the story opens and closes talking about the bar’s lone toilet, fun is repeatedly poked at “hoppy” microbrews — comes up short, as do the characters in their quest to connect with one another. It feels both apt — it’s hard to discuss the death of a child; I still have trouble 18 years on — but also like a missed opportunity.

That’s also the case in other stories, though the stakes are lower: In “Charter Year, 1972,” a couple with a new baby have won some sort of contest and resist the publicity obligations that come with it. The wife finally says, “It’ll be a year no one forgets,” and while the ominousness is clear, the story abruptly ends.

In another story, “Frequencies,” a father hears a strange voice coming from the baby monitor. It’s reminiscent of the classic John Cheever story, “The Enormous Radio,” but where that story builds into a tearing crescendo, “Frequencies” ends with the father smashing the monitor and the baby saying “clearly, distinctly” a single word: “dull.” It’s funny and sad but also cryptic, leaving a reader wanting more.

But much else in this collection delivers, in particular its title story, which is also its longest. “Your Father Sends His Love” finds a father trying and often failing to do just that with his two sons, one of whom has cerebral palsy. Evers is merciless with these characters, letting none of them — in particular, the father — escape from the delicate situations Evers puts them in. He stirs in a mystery, as well, but take my advice: Don’t flip to the end, or you’ll spoil the many pleasures that are otherwise to be had.

Liam Callanan is the author of the novels The Cloud Atlas and All Saints and, most recently, a collection of stories, Listen. He lives in Milwaukee and on the web at liamcallanan.com

An intricately interwoven story about secrets and the unbreakable bond of sisterhood.