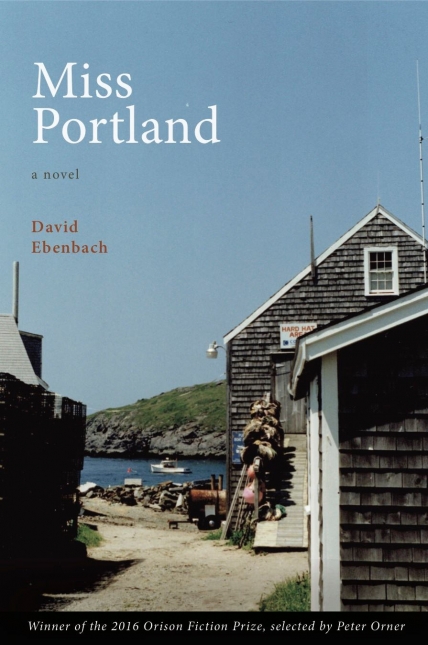 Robert Frost once wrote, “Home is the place where, when you have to go there, they have to take you in.” But what if you can’t even find the address? In David Ebenbach’s touching new novel, Miss Portland, the “home” our protagonist is looking for is a place where she can be accepted with all her idiosyncrasies and passions. She’s been searching a long time.

The reader realizes early on that Zoe, in her early thirties, is quirky. Communes, religious cults, bodywork, cleansing diets, she’s done it all in her quest for self-realization and peace; all journeys begun in eager bursts of energy leading to depression and emptiness when each new quest proves fruitless.

It rapidly becomes clear that Zoe is struggling with bipolar disorder, but Ebenbach never mentions the condition. The book isn’t about a diagnosis, and neither is Zoe. Rather, it’s about how one woman comes to terms with herself, her choices, and her own difference in a world that values similarity and punishes “originality.”

We meet Zoe as she embarks on a new enthusiasm. She has moved to Portland to be with the insufferable and sanctimonious Gordy, a yoga teacher who lives in a trailer and attempts to “manage” Zoe’s moods and sensitive stomach with slow breathing and smoothies. He has helped Zoe to see that she had to leave the “toxic” city (and her therapy and meds) to find a place where “finally, it wasn’t crazy to be the person she was!”

Zoe has abruptly uprooted herself from her stable job (the first she’s held) to follow Gordy, with the goal of opening a mindfulness center in Maine. The state itself has a special significance for her. As a young girl, her family had rented an A-frame house there, and for the space of that vacation, Zoe had experienced “that brand-new, totally unfamiliar calm” which she has been trying to regain in the “two-and-almost-a-half decades since.” Maine and mindfulness seem like the answer. If she ever had a home, that A-frame in Vacationland was it.

When Gordy puts the mindfulness center on hold, Zoe sets out to start her own secret practice as a personal mindfulness coach, meeting her clients in a coffeeshop that becomes a makeshift office.

Feeling isolated, she pursues a friendship with the shop’s semi-goth barista, Brittany. Unfortunately, Brittany ultimately decides she prefers a relationship based on the “commerce thing” of barista and customer, rather than friendship.

Zoe struggles throughout the novel to connect with others. We watch as she carefully forges a tenuous and sweet relationship with Gordy’s young daughter, Taylor, and as the relationship with the controlling Gordy begins to take on a slightly ominous tone.

Throughout, the author skillfully reminds us that we are seeing this world through the somewhat unreliable eyes of our protagonist, whose brother (the one member of her nuclear family Zoe seems to have real affection for) gently attempts to draw her back to earth: “I’ve heard you sound like this before.”

For Zoe’s family, “cycle” and “episode” are key descriptive terms, and reining her in is an ongoing family goal.

Zoe, frustrated with being defined by these labels and her poor past choices, works hard to make this new venture work; however, the reader watches as her moods gradually spiral out of control. Wisely, Ebenbach forgoes direct critical commentary on Zoe’s increasingly chaotic and grandiose thoughts, choosing instead to allow the reader to go there with her.

Anyone who has ever waded through depression will recognize the “psychological syrup” which threatens to suspend her. That Zoe is able to break through and move herself out of this place seems a testament to her grit and growing self-awareness: “But being in this place and knowing that she was in it was different from being in it unaware.” Movement is ultimately necessary “because she knew, she knew that this got very ugly if you just let it go.”

Where Zoe chooses to go, and what she finds in her final quest, illuminate both her past and her future. Readers who like tidy endings may feel a bit cheated. But one of the novel’s most compelling message is that life is rarely tidy — certainly not for this heroine — and that the search for “home” is, finally, less about the destination and more about the journey.