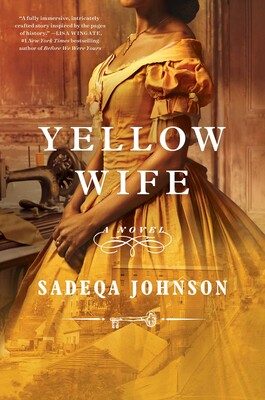 Virginia, 1850. Seventeen-year-old Pheby is treated better than the other slaves on Master Jacob’s plantation. Referred to as “yellow” because she is the offspring of the white master and the plantation’s Black medicine woman, Pheby has been educated by Miss Sally, the master’s late sister, who taught her all the things any well-bred young white woman should know: playing the piano, reading, and even arithmetic and geography.

Master Jacob’s wife thinks Miss Sally “spoiled [Pheby] rotten. Got her thinking that she is better than a slave.” The master has even promised Pheby her freedom once she turns 18. The other slaves scoff at this, telling Pheby, “White folks’ promises ain’t but dust. ’Specially the white folks called Massa.” Nevertheless, Pheby doesn’t doubt the master’s word and stays faithful to her duties on the plantation.

Unfortunately, Master Jacob is unable to come through, and Pheby falls into the hands of slave traders, who take her from the plantation to a slave auction. Her light skin and beauty put her at risk of becoming a “fancy girl” and living a life of enforced prostitution. But at the last moment, she is saved from that fate by Rubin Lapier, owner of one of the most notorious slave jails in Richmond.

Lapier takes Pheby as his unofficial wife. When she asks another slave why he doesn’t have a white wife, she is told, “No respectable man would marry his daughter off to the owner of a slave pen. Even though [Lapier] is wealthy, high society southerners consider traders dishonorable.” And Lapier is, indeed, dishonorable.

As the mistress of Lapier Jail, Pheby again finds herself straddling two worlds: more fortunate than the other slaves, she treads a fine line between showing kindness to her underlings and pleasing Lapier by running the household as he wishes. Still, the city does offer her more opportunities than a plantation would, as the Black wife of another jailer points out:

“If we were on a plantation, the best we could hope for was a position working in the big house. Here, we are running our own homes.”

However, these homes are mixed blessings. While Pheby sometimes glimpses Lapier’s softer side, he has the thirst for blood of a fairytale villain. In order to survive, Pheby becomes complicit in the slave trade, too, as she is tasked with “prettying up” slave girls for auction.

The way she keeps a record of these girls’ stories and treats them like daughters during her brief sessions with them is beautiful and heart-wrenching. And even though Pheby’s attempts to assuage the suffering of other slaves seem like pathetically small gestures, they are no doubt realistic for a woman in her situation.

Adding to the complications of Pheby’s position are the light-skinned children she has with Lapier. One day, she comes upon her children playing a game that seems innocent to them but is deeply disturbing to her:

“What are you playing?”
“Auction,” chimed Isabel.
I looked at them, confused.
“Let us show you how it is done.” Hester led me to the chair. “Joan, you be the buyer. Isabel, get on the block.”
Hester held up her hand to Joan. “This here is a fine girl. Who has one hundred dollars for her? Do I hear one hundred dollars?”

Pheby scolds them, but they are merely mimicking what they’ve seen in the courtyard of their own home.

This novel — whose main characters are based on real people — is not for the squeamish. Vivid, detailed descriptions of torture and sexual abuse are numerous and could trigger some readers. And while author Sadeqa Johnson has created an interesting protagonist and a generally gripping story, the ending seems rushed. Although a planned escape forms the climax of the novel, the action falls strangely flat.

The most affecting parts of Yellow Wife focus on motherhood. After female slaves give birth, their whole focus shifts to finding a better life for their children. Early in the novel, Pheby’s mother tells her, “Ain’t many choices for a slave woman. Just know everything I do is for you. I’ma die a slave. I knows that. But you, baby, you are meant to see freedom. I’s makin’ sure.”

Later, another jailer’s wife expresses a similar sentiment: “Our children are our legacy. We must educate them, and then get them out of the South.” Pheby wholeheartedly agrees and is willing to make any sacrifice for her children.

Throughout, Pheby’s main form of resistance is her hidden journal, in which she records both her mother’s remedies and the stories of the slave girls she prepares for auction. Her writing is often the only way to take a stand against the injustices she sees daily; it’s a powerful act in a tale where all the admirable characters are otherwise powerless.