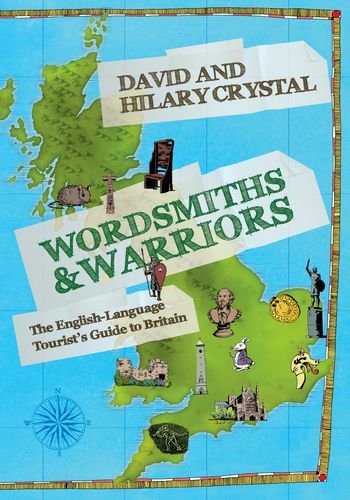 Wordsmiths and Warriors describes a real journey: The authors, David and Hilary Crystal, drove thousands of miles, from southeast Kent to the Scottish lowlands and from southwest Wales to the East Anglian coast, to produce this combination English-language history and travel guide.

To those of us who love this language — its borrowed words, its ornery grammar, its anti-authoritarian pronunciation — the idea is intriguing: discover its roots and trace its development from the arrival of the Anglo-Saxons in 449 A.D. through the role of University College London in parsing the phonetics of spoken English and the study of English grammar and usage in the 20th century. On this journey through Britain, we discover the people who gave our language its color and character: Saxon invaders, medieval scholars, poets, reformers, dictionary writers.

The authors have arranged the book chronologically, starting with King Vortigern’s invitation to the Angles and the Saxons to come “from the parts beyond the sea” and help him fight off the Norse raiders. Three long ships arrived in Pegwell Bay (Kent), commanded by Hengist and Horsa, who promptly opened the doors to “swarms of the aforesaid nations,” killed Vortigern in battle and forced the Britons out of the region. Thus begins the journey of our irascible language.

What the authors dub “the earliest known English word” was discovered in 1932 by a team of archaeologists excavating a site at Caistor St. Edmund in Norfolk. They uncovered an urn containing some burned bones — probably ankle bones from animals. One was different: It had been inscribed with a series of runes. Though there can be no certainty, the most probable translation is “roe-deer,” and the bone probably had been a piece in a game similar to dice.

From these earliest beginnings, the chapters — 57 of them — continue, focusing on topics such as the first recorded English sentence (also runic, roughly translated as “this howling she-wolf is a reward to my kinsman”) and the contributions of Venerable Bede, King Alfred, the Anglo-Saxon Chronicle, Chaucer, Caxton, Fowler, G.B. Shaw and the rest. Dialects, spelling reform, Scots English, Welsh English, the linguistic innovations of Shakespeare — it’s all here. The chapter on John Ray (1627-1705), the “father of English proverbs,” offers a surprise to American readers. It turns out that “Early to go to bed and early to rise, makes a man healthy, wealthy, and wise” is one of his sayings, not Ben Franklin’s. Ray also gives us an exhaustive list of words for being drunk, including this gem: “drunk as a wheelbarrow.”

The book’s prose, by David Crystal, is folksy and personal, as if he and the reader were traipsing around the English landscape together. The book includes a guide to regional groupings, a place index, a general index and a comprehensive list of sources. Amply illustrated with photographs by Hilary Crystal, each chapter includes detailed directions for getting to the described sites. Disappointingly, the book lacks maps.

There’s a “regional grouping” — a drawing of England with red dots for the locations of each of the sites — and what looks like a child’s attempt at a map of London, with numbers to indicate the noted sites there. For me, this lack is a major flaw. In fact, interested readers will wish each chapter or section had its own map. For reasons that will forever remain mysterious to this reader, the Crystals include postal codes for each site visited.

Wordsmiths and Warriors is a work to be savored: tasted, not gulped; sipped, rather than swilled. Each chapter’s length is perfect for those inevitable waits we endure; take it along when you go to renew your driver’s license or have your car inspected. Some of us bibliomanes go so far as to keep a book in the car (guilty) so as never to be without reading material in an emergency. Usually mine are histories or biographies (no compulsion to keep reading to find out the end), but there’s no doubt that Wordsmiths and Warriors will find its way to the storage console in the big black SUV.